It has become evident that the [Malaysia Airlines restructuring] plan was not working as well as expected, says Shahril. Photo by Bloomberg 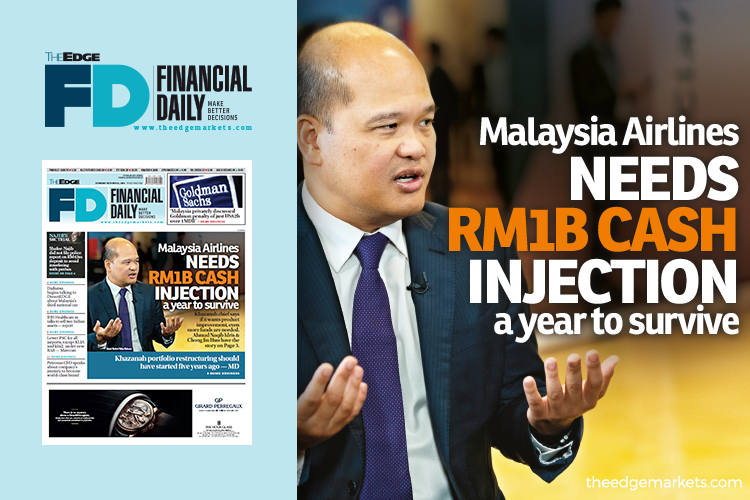 And for Malaysia Airlines to have a better chance at capturing more revenue, the government would have to inject more money to improve its product, increase its flight frequencies and improve the overall network of the airline.

“We have to decide what is the best bet. Is it in supporting aviation (Malaysia Airlines) with its benefits (on the Malaysian economy) or supporting digital benefits (such as fifth-generation technology) with all its benefits, or (supporting) electric vehicles or whatever it is that the government wants (to push),” he said.

He said Khazanah has continued to inject funds into Malaysia Airlines to enable it to continue operating as a going concern because the government expects to reap overall economic returns from the airline’s restructuring, adding that the government is not looking only at Malaysia Airlines’ profitability. Year-to-date, Khazanah has pumped RM800 million into the national carrier.

Shahril said Khazanah is working with the government to identify the benefits Malaysia Airlines can provide to the country in terms of economic development and spin-offs.

“The government is also looking at the economic benefits that Malaysia could lose if Malaysia Airlines is not in the picture — either through loss of taxation or a drop in terms of number of passengers coming to Malaysia.”

Shahril is of the view that addressing cost-efficiency will not resolve Malaysia Airlines’ financial conundrum. Rather, he believes the government should look towards industry consolidation, as well as solutions to address overcapacity in the market and its revenue management.

The PAC yesterday released findings of its proceedings launched on April 1 to look into the losses recorded by Khazanah after it fell into the red in 2018, posting a pre-tax loss of RM6.3 billion compared to a net profit of RM2.9 billion in 2017. This was the result of a RM7.3 billion impairment provision — half of which or RM3.1 billion was due to Malaysia Airlines — coupled with poor market conditions and a five-month limbo after the 14th general elections in May 2018 before a new board and management took over in September.

“By right, what should have happened is that we should have started staggering the RM3.1 billion [impairment] in the preceding years as it has become evident that the [Malaysia Airlines restructuring] plan was not working as well as expected.

“[The call could have been made] earlier to start providing earlier in the cycle, but making the call to provide is one that the board of directors has to take a view on — are they optimistic or are they pessimistic whether the plan is going to work or not,” said Shahril in response to a question from Subang Jaya member of Parliament Wong Chen during the PAC inquiry in April.

The PAC’s report also quoted Shahril as saying that “massive overcapacity” in the market where supply outstrips demand had derailed Malaysia Airlines’ plan to turn around in the financial year ended Dec 31, 2018 (FY18).

Shahril said Malaysia Airlines continued to report losses due to problems in the domestic and global aviation sector.

He pointed out that in Malaysia alone, there are four carriers, namely Malaysia Airlines, AirAsia Group Bhd, AirAsia X Bhd and Malindo Airways Sdn Bhd, which are catering to a market of 30 million people.

This translates into about 1.7 seats per passenger.

Despite its success in rationalising costs, which saw the reduction of Malaysia Airlines’ cost for available seat kilometre to below that of regional airlines including Singapore Airlines Ltd and Thai Airways International PCL, the airline was unable to register a profit as revenue issues could not be addressed.

“(Under the 12-point MAS Recovery Plan announced in 2014,) Malaysia Airlines was supposed to break even in 2018 and start reporting profit in 2019. But it registered billions of ringgit in losses, which resulted in the airline’s fair value not being able to support (justify) its investment cost,” he said.

On Tuesday, Economic Affairs Minister Datuk Seri Mohamed Azmin Ali was reported as saying that Khazanah has shortlisted four investors to be its strategic partner.

In July, Malaysia Airlines group chief executive officer Captain Izham Ismail revealed a new long-term business plan (LTBP), which would see the national carrier achieve financial break-even by 2022 and generate enough income to cover the cost of capital for its operations two years later. However, the plan was still awaiting approval from the Khazanah board of directors then.

The LTBP consists of four pillars, which include rightsizing the airline’s fleet of Airbus and Boeing aircraft and network expansion that is focused on the Asia-Pacific.

The three other pillars involve providing a premium customer experience, having a partnership strategy and diversifying the national carrier’s revenue.