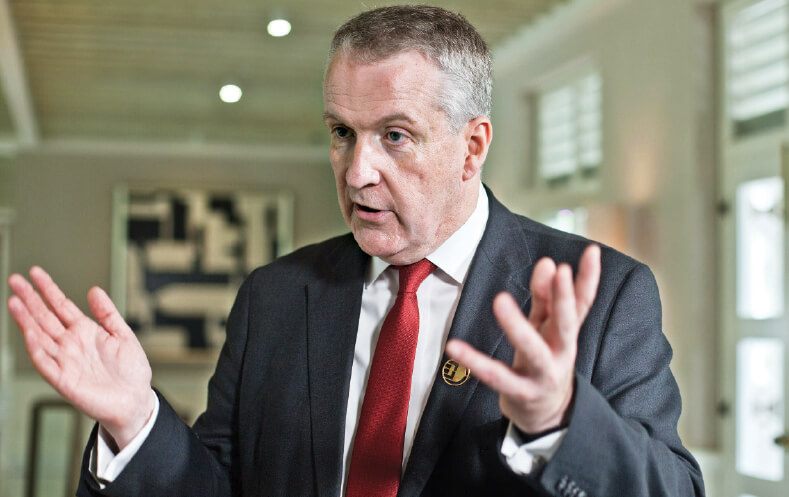 Bellew: It allows for balanced growth. If you look around the world, a lot don’t have partners in Southeast Asia. Photo by Bloomberg

KUALA LUMPUR: Malaysia Airlines Bhd is exploring the option of having another airline on board by selling a strategic stake in the national carrier, among other measures, before its listing exercise that is slated to take place in 2019, according to its chief executive officer (CEO) Peter Bellew.

“Listing is one route. It could also be that we are more inclined to do deal with another carrier, do a more detailed partnership with another carrier — a trade investment, but we should be listable by 2019, and I expect we will list, but it’s not the only route that we may take.

“It’s the trend these days; that’s what’s happening. Other airlines, they take a portion of somebody else, get really close [working] together … what it does is it generally lifts overall value, and you have other commercial operation opportunities, maybe you can have joint purchasing, maybe you cooperate on aircraft, you have the same product line, that’s the trend where the industry is going, and it makes a lot of sense.

‘‘It allows for balanced growth. If you look around the world, a lot don’t have partners in Southeast Asia,’’ he said on the side lines of a media visit to Airbus in Toulouse.

Bellew, however, was quick to add that negotiations towards this end have yet to commence. He cited Delta Airlines buying into Virgin Atlantic, who worked in a cross-shareholding with Air France-KLM, as a business model that he was looking at.

In July, Delta Airlines announced that it was looking at buying a 10% stake in Air France-KLM for US$438 million, while Air France-KLM buys a 31% stake in Virgin Atlantic forking out US$287 million.

China Eastern Airlines, meanwhile, bought a 10% stake in Air France-KLM for the same amount — US$438 million.

“It’s an option,” Bellew explained without divulging any information.

“We’ve worked very hard over the last 12 months in building bridges with other carriers all over the world; I think it’s going to pay off very well for us over the next two years,” he said.

The option of having another airline to hold a stake in Malaysia Airlines is entirely new.

In 2011, the then Malaysian Airline System Bhd’s (MAS) parent Khazanah Nasional Bhd announced a comprehensive collaboration framework (CCF). Under the CCF, Khazanah, which then owned a 69.5% stake in MAS, was supposed to swap its 20.5% stake in the national carrier for a 10% stake in AirAsia Bhd with Tune Air Sdn Bhd.

Khazanah also had an option to acquire a 10% equity stake in AirAsia X Bhd.

Part of the deal involved having MAS and AirAsia serve separate business segments, and effectively compete for different consumers.

MAS was to focus on becoming a premium airline and transform its turboprop unit Firefly into a full-service carrier. AirAsia, on the other hand, was to retain its focus as a regional low-cost carrier (LCC), while its subsidiary AirAsia X would remain a medium- to long-haul LCC.

However, the deal fell through due to resistances from the unions months later. Subsequently, Khazanah took the airline private and commenced its 12-point plan to revive the national carrier, in a whopping RM6 billion corporate exercise in 2014.

The floatation exercise is part of the plan. Another key aspect of Khazanah’s plan is for Malaysia Airlines to turn the corner by next year.

billion the year before.

Bellew acknowledged that Malaysia Airlines will remain loss-making in FY17 which is within expectations. “I think we are on track to be profitable in the second half of next year,’’ he added.

The national carrier is in the midst of leasing six Airbus A330-200 from AER Capital, 25 planes from Boeing, eight of which are 787 Dreamliners, 16 are 737 Max 8 and an option for eight more 737 Max 8, largely to replace ageing planes.

Currently, the airline has a healthy average load factor of about 80%.