Malaysia Airlines gets another RM300m shot in the arm 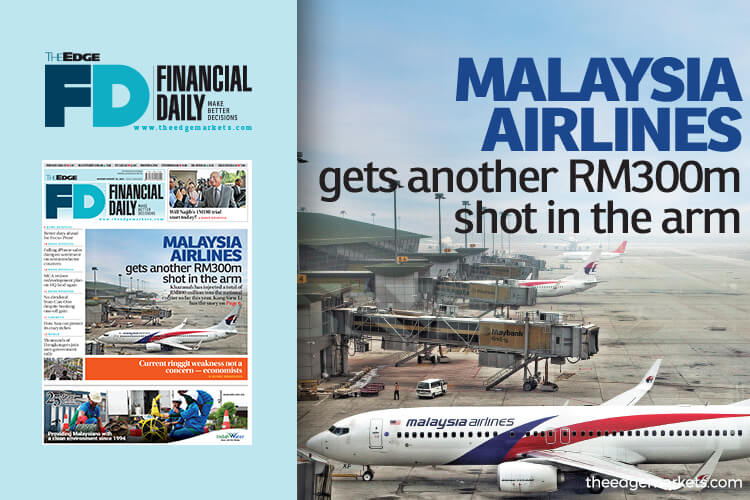 A spokesperson for Khazanah, which wholly owns the loss-making airline, told The Edge Financial Daily that the RM800 million capital injection into MAG is part of the earlier RM6 billion funding approved under the 12-point MAS Recovery Plan (MRP) announced in 2014.

The spokesperson declined to disclose the total sum that Khazanah has disbursed under the MRP except to say that “in the interim, MAG will continue to require funding to operate on a business-as-usual basis while making efforts in enhancing its customer experience and containing losses”.

Under the MRP, Malaysia Airlines was to have broken even in 2018, achieve profitability and be listed in 2019. However, it missed the target amid a challenging operating environment. Its group chief executive officer Izham Ismail blamed 2018’s poor performance on crew shortage, intense competition, oversupply of capacity and volatility in fuel prices and foreign exchange.

The latest disbursement comes at a time when US-based investment bank Morgan Stanley had reportedly been hired as adviser to explore possible options to turn around the airline, including a stake sale.

On the progress of the evaluation, the Khazanah spokesperson said several parties have publicly expressed their interests in MAG.

“Khazanah will evaluate all serious offers, specifically their capabilities financially and from the execution point of view. At this stage, we cannot comment on the process and progress of the evaluation.”

The spokesperson said MAG is also working with Khazanah on reassessing its strategy and evaluating all strategic options, to steer the group towards financial sustainability.

“Ultimately, the airline’s future is a policy decision for Khazanah’s shareholder/the government to decide on and all strategic options (including a partnership with other airlines and MAG’s long-term business plan) are being evaluated,” the spokesperson added.

Last month, Izham unveiled a new long-term business plan (LTBP), which is awaiting approval from Khazanah’s board of directors, that would see Malaysia Airlines achieving financial break-even by 2022 and generating enough income to cover the cost of capital for its operations two years later.

Still positioning Malaysia Airlines as a premium airline, the LTBP consists of four pillars, which include rightsizing the airline’s fleet of Airbus and Boeing aircraft and network expansion that is focused on the Asia-Pacific. The three other pillars involve providing a premium customer experience, having a partnership strategy and diversifying the national carrier’s revenue.

The Edge Financial Daily understands that Najah Air is one of the suitors that have signed non-disclosure agreements with Khazanah, preventing them from commenting on their proposals for Malaysia Airlines.