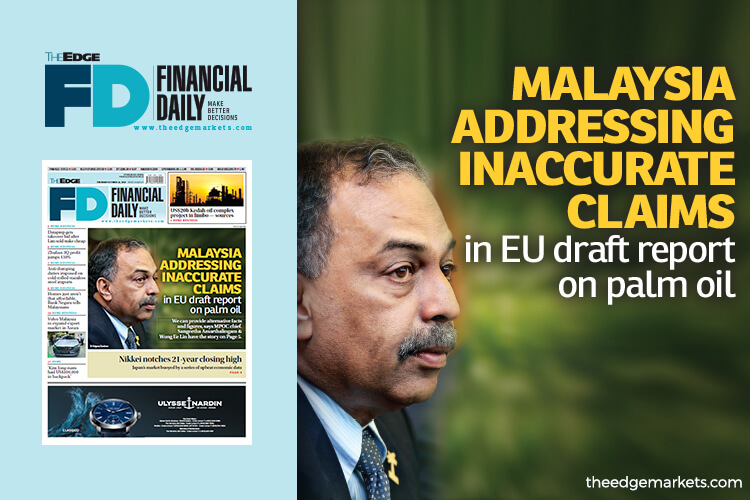 KUALA LUMPUR: Malaysia is addressing “inaccurate” points in the European Parliament’s draft report on palm oil usage and sustainability, and will submit its views to the European side tomorrow.

The 200-odd page draft report titled “Study on the environmental impact of palm oil consumption and on existing sustainability standards” was produced after the European Parliament’s resolution on April 4 to phase out unsustainable palm oil and other vegetable oils by 2020.

The European Parliament had also endorsed the certified sustainable palm oil (CSPO) plan for Europe-bound vegetable oil exports to ensure that they are produced in an environmentally sustainable way.

“There are lots of claims or citations in [the draft report] which we find are not 100% accurate or not generally relevant to the scenario in Malaysia,” said Kalyana.

“We have facts and figures to address the contention and elements. We can provide alternative facts and figures on the basis of intervention,” he told reporters at the Palm Oil Sustainability European Union (EU)-Malaysia International Discourse which was organised by the EU-Malaysia Chamber of Commerce and Industry.

Describing the draft report as the “wish list” of MEPs, Kalyana stressed that the EU Parliament has no rule-making authority.

He added that the EU Commission was expected to take into consideration Malaysia’s views when preparing its updated report on the matter.

Kalyana also pointed out that Malaysia has reaffirmed its commitment towards the supply of CSPO through its Malaysian Sustainable Palm Oil standards by end-2019.

Separately, the ambassador of the Netherlands to Malaysia, HE Karin Mossenlechner, said EU member states and the EU Commission have no position on the resolution on vegetable oils.

She said the European Parliament has asked the EU Commission to look into several areas, which the commission is now proceeding with, and it is up to the EU member states to discuss this.

“We have to look at elements that are relevant and look for a balanced approach to see how they can address the issues of concern in the resolution of the EU Parliament. And at the same time, also taking into account the important contribution palm oil makes to the economy, rural development area and food development,” she said.

Mossenlechner noted that the EU Commission is still in the process of discussing the issues and has not come out with a solid opinion on the resolution.

“It will have continuous dialogue sessions. It can’t be achieved overnight. It needs continuous engagement and working together. It’s a step-by-step process working towards suitability,” she added.

The resolution calls for the EU to discontinue the usage of vegetable oils in biodiesel by 2020 on the grounds that they were allegedly produced in an unsustainable manner leading to deforestation.