Malaysia in 2050: Old, poor, sick and without children? 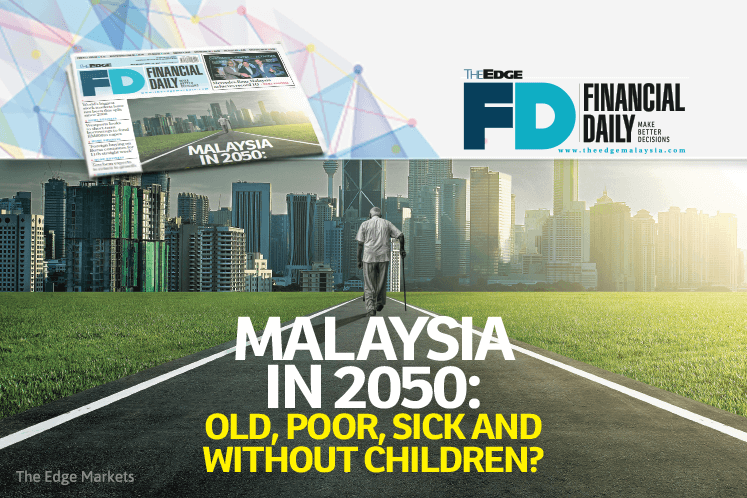 KUALA LUMPUR: Malaysia’s aspiration to become a top 20 country in the world by 2050, under the 2050 National Transformation (TN50) initiative, will see a serious issue from a demographic perspective as experts ponder a possible ugly truth for the country where a majority of the population will be old, poor, sick and without children by then.

“As it stands, there are more of us from six million in 1957 to 30 million now and [it] is going to be 40 million [in 2050]. But we are going to be an old society. Old, poor, sick, have to work and [many] without children or grandchildren [by 2050],” said DM Analytics Malaysia chief economist Dr Muhammed Abdul Khalid, who spoke at the forum on “Malaysia’s Population in 2050: What Does This Mean Socio-Economically?” yesterday. The forum was organised by the Institute of Strategic and International Studies Malaysia.

“Some will do better, but many of us will not. We will get worse. Therefore, you need adjustments to policies for this,” he said.

Muhammed said Malaysia at present does not have a comprehensive policy to address the issue of an ageing population. He cited a presentation by Unicef Malaysia’s deputy representative and senior social policy specialist Dr Amjad Rabi, which showed Malaysia becoming an ageing nation by 2035, with more than 15% of the population aged 65 and above, compared with 8% now.

He noted that currently there are about 70% of Malaysians — who are about to withdraw their money from the Employees Provident Fund (EPF) — with less than RM50,000 in EPF savings and about 20% having less than RM7,000.

“If you assume monthly expenditure at [a] minimum wage of RM1,000, one in five [of those withdrawing their EPF money] cannot last for a very long time. We are in huge trouble.

Obesity and smoking are also big issues in Malaysia, with the country being one of the highest in Southeast Asia in terms of obesity. “Today, one in five Malaysians are smokers, while seven in 10 are second-hand smokers. At home, four in 10 [Malaysians] are second-hand smokers. The diabetic [population] has also increased. Hypertension — one in three Malaysians have it. Mental health, one in three. This is not healthy,” Muhammed shared.

According to the health ministry’s National Health and Morbidity Survey 2015 (Volume II) report, 23% of Malaysians are under the category of abdominal obesity. The overall prevalence of diabetes is at 17.5%.The report also showed 22.8% of Malaysians are smokers. More than a quarter of non-smokers reported exposure to second-hand smoke. The survey also revealed that the prevalence of mental health problems among adults increased from 10.7% in 1996 to 29.2% in 2015.

In Malaysia, the fertility rate has also declined from 6.2 children per woman during independence to 1.9 per woman today, according to Amjad.

With less children expected in Malaysia in future, there will be less support for the ageing population.

Muhammed also pointed to an equally important issue that has hit the younger generation, that is unemployment and stagnant income growth.

“Young people are also not doing well. Youth unemployment is going up. Even if you get a job, your salary is probably going to be stagnant. Between 2007 and 2015, the job wage growth for graduates was about 2%. Minus inflation, it (wage growth) was negative,” he said.

“This issue is a serious one that is not given enough attention. To put it bluntly, we’re in serious trouble. [As such] the entire structure of the economy and ideology has to change. It’s not just [for] a specific policy that intervention is required, but the whole ideology.

Chua Choon Hwa, undersecretary for the policy and strategic planning division of the women, family and community development ministry, said some of the plans that have been put in place to address such issues include the ministry’s Caring Society initiative, which targets job redesign for family or mature workers, childcare services, flexible working arrangements, lifelong learning, younger-generation investments and savings, as well as affordable homes.