THE growth of the Internet and social networking and the proliferation of smart mobile devices have contributed to the ever-increasing amounts of data that can be accessed by companies.

However, while data collection and reporting has been part and parcel of business functions, not many companies or organisations have the tools and expertise to monetise the value of the data.

Recognising the immense potential, the Multimedia Development Corporation (MDeC) is drawing a big data analytics roadmap to chart the development of the industry in Malaysia.

“Big data analytics is a new concept, and Malaysia is still very new to this field. In terms of maturity level perspective, currently we are at the tail end of maturity level one, and we will be getting to maturity level two soon,” says Dr Karl Ng, director of MDeC’s Innovation Capital Division.

Maturity level one is where companies undertake big data analytics on an ad hoc basis, without a fixed budget. They take it as an experimental project rather than part and parcel of business functions and operations.

Maturity level two will see companies having a fixed budget for big data analytics, with resources allocated, and data scientists employed to not only harvest and store data but also interpret it so it can bring value to other users within the organisation.

“Most companies have tonnes of data, but the issue is they don’t have the people to interpret the data. So, this is the area that we need to drive, and to show the organisations that there is actually value they can extract from this. The return on investment is big,” says Ng.

The government is looking at big data analytics as a priority under the 11th Malaysia Plan (2016 to 2020), says Ng. A lot of the bigger companies, such as banks and telcos, are embarking on this journey, he adds.

“From the local spending standpoint, we are looking at RM2 billion in market size by 2020. But it can be more, because this is a very conservative figure. It does not include the multiplying effects of the use of big data in traditional businesses such as telcos, banks and airlines,” says Ng.

But the country faces several hurdles in realising the full potential of big data analytics. The biggest obstacle is the lack of talent. At the moment, no local university offers a tailor-made course in data sciences and analytics, says Ng.

According to research by IT research and advisory company Gartner, 4.4 million jobs will be created to support big data analytics all around the world next year. Another study by McKinsey says that in the US alone, there will be a gap of between 140,000 and 190,000 talents in this field in 2016.

“We are pushing for the development of data science professions, including upskilling the current talents in the industry by taking up certain courses related to data sciences and, at the same time, we want the universities to look at potential top-up courses by working with the industry players,” says Ng.

“We are also working with universities to set up big data centres to develop talent through research.”

Besides that, MDeC has come up with various efforts and programmes to raise awareness of big data analytics among Malaysian companies, including organising Big Data Week.  It also provides a product commercialisation fund, a matching fund that offers financing of up to RM750,000 per company to develop solutions for big data analytics, Ng explains. Last year, the government provided RM10 million for this fund.

MDeC has also set up a task force comprising partners from  institutes of higher learnings, government agencies and the private sector, including companies such as Teradata, to look into developing the industry in Malaysia.

A one-stop centre will be set up as well for companies to learn how to get started with big data analytics. Organisations can utilise the centre as an innovation lab to see how they can implement some of the concepts in their businesses.

“Another thing that we are doing is looking at open data on how we can use more from government or publicly available data to create more value. In the UK, for example, transport data is made available through a platform, and the data is updated in real time,” Ng says.

“So, companies can use the data to create transport applications that will benefit the public.” He notes that in the past, the private sector and the government were working separately. “It is a paradigm shift, something that we are trying to promote as well.” 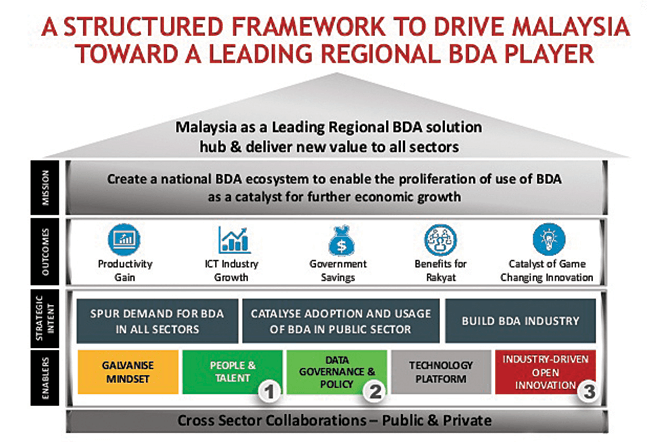