Malakoff walking a tightrope on IPO

MMC Corp Bhd (fundamental: 0.85; valuation: 2.4) will be testing the already soft equity market with the listing of its debt-laden energy unit, Malakoff Corp Bhd, in May this year if all goes well.

The listing, which is expected to raise around US$1 billion (RM3.55 billion) will help billionaire Tan Sri Syed Mokhtar Albukhary lighten the balance sheet of his heavily geared portfolio. Reception to Malakoff’s initial public offering (IPO) will also set the stage for 1Malaysia Development Bhd’s (1MDB) own listing of its energy unit, Edra Global Energy Bhd, which is expected to be delayed to the middle of the year.

However, there is some pressure for Malakoff and Edra Global to be listed as soon as possible because both companies plan to utilise the bulk of the proceeds from their IPOs to repay borrowings.

Another similarity between the two IPOs is that they have both been considerably delayed or deferred.

Malakoff’s listing was originally scheduled for between 2013 and 2014 but had to be put on hold when the group’s flagship power station — the 2,100MW coal-fired plant in Tanjung Bin (T-Bin3) — was repeatedly shut down due to leaks in the boiler tubes. The second delay came in the fourth quarter of last year, following a setback in the construction of Tanjung Bin 4 (T-Bin4) — a 1,000MW coal-fired extension of the aforementioned plant that is due to be completed in March 2016.

Problems at T-Bin3 and T-Bin4 may be the key risks for the IPO but at the end of the day, the success or failure of the offering comes down to its pricing.

“It will depend on how much Malakoff wants to raise. In the current climate, I doubt they can be too aggressive with the pricing. Initially, they were planning on raising US$1 billion. But in ringgit terms, that amount has grown from RM3 billion to over RM3.58 billion due to the exchange rate,” says an analyst. 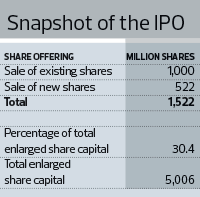 Note that Malakoff plans to offer 1.522 billion shares in its IPO, consisting of one billion existing shares and 521.74 million new shares. This represents 30.4% of the enlarged issued and paid-up share capital.

Hence, working backwards, if Malakoff raises RM3 billion, the IPO would be priced at about RM1.97 per share, resulting in a market capitalisation of RM9.9 billion. However, if Malakoff plans to raise RM3.85 billion, that prices the IPO at RM2.35 per share and the market cap increases to RM11.8 billion.

From a valuation perspective, that makes a huge difference. At RM1.97 per share, the company is valued at about 14 times estimated forward earnings of RM700 million for the financial year 2016. At RM2.35 per share, Malakoff would be valued at just under 17 times forward earnings.

The RM700 million profit after tax estimate is based on the assumption that T-Bin3 stays fully operational and T-Bin4 is completed on time and begins contributing to earnings.

It also assumes growing contributions from the group’s 50% acquisition of Macarthur Wind Farm Pty Ltd for A$130 million (RM382 million) in mid-2013. Note that the Australia-based wind farm was loss-making prior to the acquisition. It broke even in 2013 and contributed to Malakoff’s earnings last year.

More importantly, fund managers will be looking at the IPO from a dividend yield perspective. Malakoff’s management has indicated a minimum payout ratio of 70% of earnings, although that is non-binding.

Despite the company’s poor performance in 2013 and 2014 due to the aforementioned operational issues, it maintained its dividend payout of about RM150 million (not including dividends for preference shares). At this level, the dividend yield would be between 1.5% and 1.3% based on an estimated share price of RM1.97 to RM2.35 respectively, which is much too low.

“If Malakoff can price close to a 5% yield, it would be worth holding for a semi-yield play. But lower than that would be tough. There isn’t room to grow locally with 1MDB getting most of the new projects. Overseas, Malakoff’s ventures are not particularly impressive,” the analyst points out.

At the very least, there will be no room to grow in the near to medium term since projects as far ahead as 2021 have already been awarded, in this case to Edra Global.

Nonetheless, if Malakoff prices itself with yields close to 5%, it could set too high a standard for Edra Global, which is only expected to price itself at a yield of between 2.5% and 3.5%, albeit with an earnings growth story.

In fact, it would be much worse for Malakoff to list after Edra Global, which is planning to raise over RM9 billion. Such a large issuance would soak up most of the liquidity in the market, making it a tough act to follow, notes the banker.

Keep in mind, however, that Malakoff has strong incentives to raise as much cash as possible. The group plans to use 90% of the funds raised to fully redeem a RM1.8 billion junior sukuk musharakah facility before the profit rate jumps from 6.3% now to 9.3% from October.

The sukuk was raised to finance MMC Corp’s RM9.23 billion privatisation of Malakoff back in 2007.

However, with only 521.74 million new shares being issued, the proceeds will range from RM1.03 billion to RM1.23 billion — not enough to settle the sukuk. Malakoff may need to maximise the value of the IPO to ensure it can settle the sukuk without relying too much on its RM2.4 billion cash balance.

On the flipside, MMC Corp stands to raise between RM1.97 billion and RM2.35 billion from the listing. 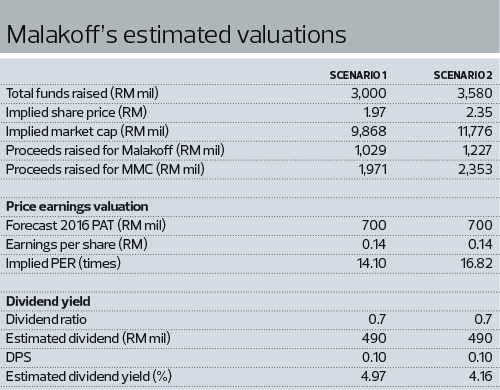 Against this backdrop, Malakoff still has the issue of T-Bin3 and T-Bin4. The T-Bin3 outages in 2013 and 2014 are estimated to have cost the group over RM250 million in lost income, excluding repair costs.

When contacted, Malakoff could not respond to questions from The Edge due to the blackout period while it finalises the IPO prospectus with the Securities Commission Malaysia.

Meanwhile, liquidated and ascertained damages on delays in the completion of T-Bin4 could run as high as RM110 million, not including foregone income.

Blaming T-Bin3’s breakdown on the poor quality of the coal being supplied, management told analysts at the briefing that Tenaga Nasional Bhd has agreed to supply higher-grade coal to prevent future mishaps. However, there is no contractual obligation to do so and Tenaga will only supply the coal on a best-effort basis, say sources.

Nonetheless, the national utility firm is expected to deliver since a breakdown in T-Bin3 would be equally, if not more, costly to it.

As for T-Bin4, the prospectus maintains the March 2016 commercial operation date, although earlier reports suggested that Malakoff was seeking a six-month extension.

According to the prospectus, T-Bin4 is only 79% complete instead of 88% as scheduled. But management states that it is confident the plant will be ready on time, failing which Malakoff should be indemnified by the engineering, procurement and construction contractors as well as the insurance it has on the project.

Moving forward, 2015 does not look like a great year for IPOs, but it will certainly see some of the most interesting ones. Malakoff’s listing will be closely watched, thanks to 1MDB. 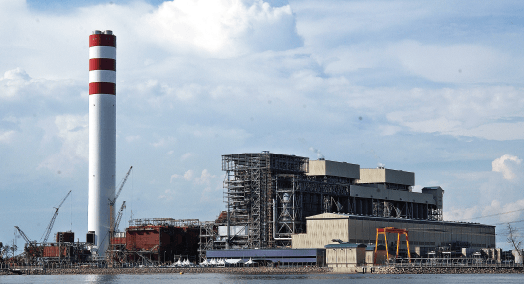