Making a mark on Batu Kawan 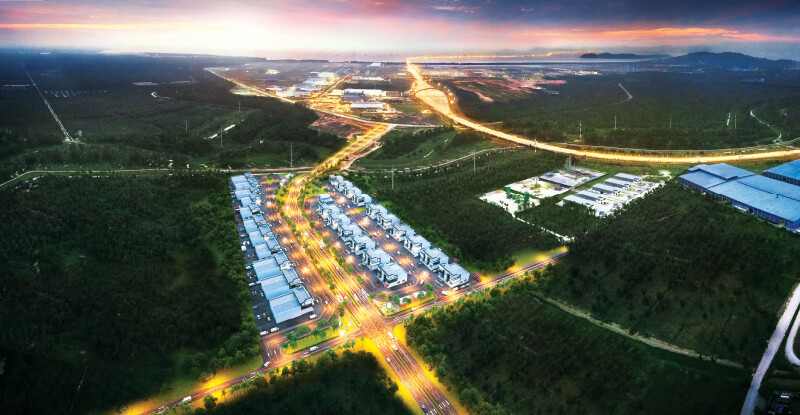 Sitting on a freehold, 21-acre tract to the southeast of Batu Kawan, Golden Land’s latest project, Golden Gateway, has a GDV of RM155 million. Pictures By Golden Land 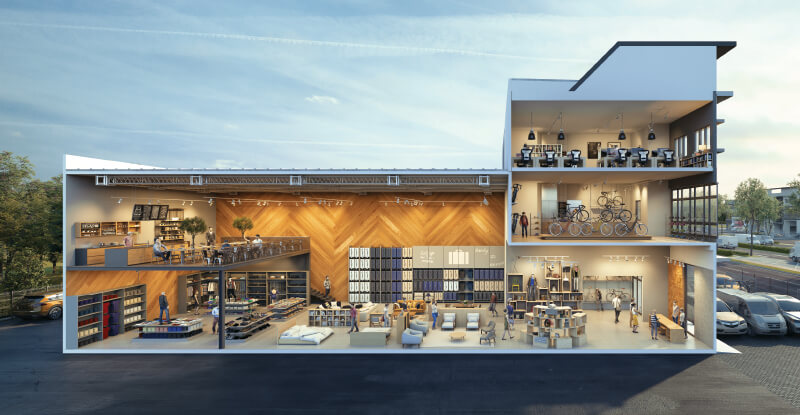 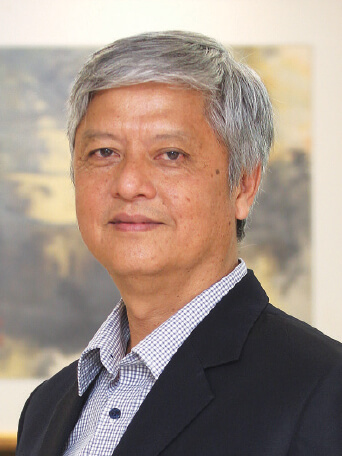 Ng: Our vision is to be a developer that cares. We would like to practise the same nurturing in property as we do in plantations. Photos by Mohd Izwan Mohd Nazam/The Edge 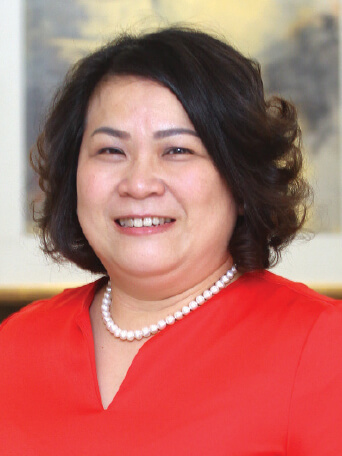 Yap: As a group, we recognise the importance of having a strong team, and foundations. We have learnt a lot about the ins-and-outs of property. 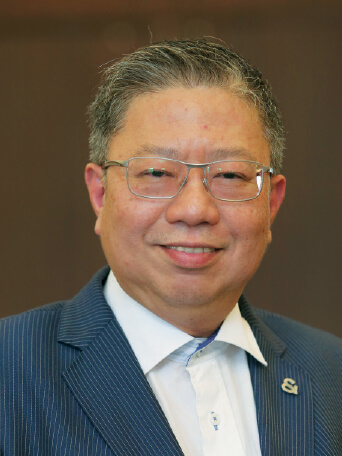 Geh: Golden Gateway is a yet-before-seen project in Batu Kawan, where it offers modern, contemporary design and functionality to the industrial segment . Photo by Sam Fong/The Edge

Plantation company Golden Land Bhd’s boardroom in its main office in Empire Tower Subang, into which we are ushered, is bright and neat. Not surprisingly, its chief operating officer Ng Heng Phai and executive director Jessica Yap, whom we are there to interview, are warm yet fastidious.

For a bit of background, Golden Land (formerly Tanah Emas Bhd) had started off in the timber industry in 1982. In line with the sustainability and availability of oil palm plantation land, Golden Land started cultivating the crop along with its timber activity. Its first estate, covering 83ha, was located in Telupid, Sabah.

Less than two years ago, the company, which was listed on the Main Board of Bursa Malaysia in 2009, ventured into property development.

After noting that ours is the property division’s first media engagement, Ng says, “Our group started off as a planter in 1982. We are quite low-profile but we have been in the industry for a long time. About 1½ years ago, we opened a property division and we hope to develop this division into a significant contributor to the group’s earnings.”

Golden Land has developed an empathy for property due to its long history in plantations. “The plantation and property businesses are not the same. In plantations, the gestation period is long; it takes a lot of nurturing and its product titles are different. In property, products are handed over in a shorter period [between two and five years]. Today, we want to practise in property what 36 years in plantations have taught us,” remarks the affable Ng.

He maintains that Golden Land’s top priority is to serve quality developments to its buyers. “Our vision is to be a developer that cares. We would like to practise the same nurturing in property as we do in plantations.

“We would like to be attentive to the details of our projects and think how they would affect our buyers and the values of the projects in the long term,” says Ng, who assumed his role in 2016.

A property industry veteran with more than 34 years in various capacities at Sunway City Bhd, Lion Group and other private companies, Ng worked for Mah Sing Group for 20 years — last position as the director of business R&D — before joining Golden Land.

According to its 2016 annual report, Golden Land had total assets worth RM642 million in its financial year ended June 30, 2016. Today, after various strategic acquisitions and asset restructuring, the group’s plantation land bank stands at more than 73,000ha, mainly in Indonesia.

According to Yap, setting up a property division was a natural progression for Golden Land. “The discussion to expand into property started about two years ago. We would like to extract and maximise the value of our land bank. That is part of the reason we established a property division. Our lands are not charged [to any bank] and is thus free of any encumbrance,” she says.

To date, Golden Land has acquired 42 acres of land (with a total GDV of about RM1 billion) for its property division. This land bank is located in Setia Alam (Klang Valley), Penang, Kota Kinabalu and Sinsuran (Sabah).

Golden Land’s first property project was in Sandakan. Yap describes it as a good learning curve and a valuable experience. “We started to learn the ropes of the industry from our first small project in Sandakan called MidTown Plaza in 2014. It was a commercial development comprising 43 shophouses with a GDV of RM50 million. We learnt a lot about the ins-and-outs of property and how to deal with the administrative [and construction] side of the industry,” she says.

“As a group, we recognise the importance of having a strong team, and foundations. Along with Ng, we have recruited a strong team and it has helped us tremendously. For example, MidTown has done well and we are hoping to experience the same with our upcoming projects.”

Yap, who specialises in plantations and human resources, holds a master’s in business administration from the University of Alabama, the US. She has been with the group for more than 18 years.

Ng says, “Currently, we are focused on strengthening our foundation as a team, and we are always working on our processes to deliver better quality products.”

Golden Land’s latest project is Golden Gateway in Batu Kawan, Penang, and it is confident it will be successful.

Recognising Batu Kawan’s potential as a strategic and booming industrial centre and in line with its long-term goal to extract value and to care for its buyers, the group has introduced an industrial project called Golden Gateway to cater for investors and small and medium enterprises (SMEs).

“The retail industry is ever-changing but enterprises still need a place to store and ship their goods from. We believe Golden Gateway will be an exceptional and viable option for those business owners who want spaces with multiple uses and functions,” says Ng.

“Golden Gateway comprises 3-storey semi-detached and detached factories. The units have a unique design: four of their main components are a factory area, an area for unloading, a showroom and an office. They are a modern approach to modern enterprise and their multifunctional layout will create good workflow.”

Yap adds, “We want to provide ample space for loading to give the best business solutions.”

The semi-detached and detached units have built-ups of 5,500 to 8,000 sq ft with prices that range from RM2.8 million to RM5 million. Launched on March 3, the project is due to be completed in 2020.

“Its earthworks are done and it is currently about 30% completed,” says Yap. “Response to the project has been positive and encouraging. To date, it is 40% taken up.”

Apart from its accessibility from the North-South Expressway and Juru Interchange, Golden Gateway has a toll-free route from Nibong Tebal/Jawi to Batu Kawan. “The project has maximum visibility and accessibility with its units facing the main road. Golden Gateway will be located next to future developments at Batu Kawan, such as IKEA, KDU University College, Columbia Hospital, theme parks and malls,” says Ng.

Among others, Golden Gateway features triple volume high clearance front entrances, strong floor loading and sufficient power, and is column-free and broadband-ready. “We will also provide a core to give our buyers the option to install their own lifts,” says Ng. “All in all, we see this project doing well and adding to the vibrancy of Batu Kawan.”

When contacted, Raine & Horne International Zaki + Partners director Michael Geh says, “Golden Gateway is a yet-before-seen project in Batu Kawan, where it offers modern, contemporary design and functionality to the industrial segment. Industrial and retail [with such names as Alibaba and Lazada] are growing sectors in Penang, especially in the Batu Kawan area.

Geh sees good demand for industrial projects, such as Golden Gateway, in Batu Kawan. “Demand looks promising as Golden Gateway is in a good location and the features [and requirements] of such projects appear sophisticated.”

According to Geh, the average price of industrial properties in Batu Kawan is between RM380 psf and RM630 psf.

In terms of the target market, Geh says industrial properties in Batu Kawan would attract 50% owner-occupiers and 50% investors, depending on the industries they are from. According to him, some of the key drivers in Batu Kawan are mobile commerce and e-commerce. “These businesses may take up [industrial properties] in Batu Kawan to use as a base to send products to Penang island and Butterworth,” he says. A challenge in Batu Kawan is its lack of population. “There is plenty of room for population growth to generate more activity in the area,” Geh adds.

Nonetheless, he opines that the industrial segment in Batu Kawan and the overall area will flourish in the long term. “In terms of its outlook, with a growing population, I see Batu Kawan thriving in the next five years.”

A project in Klang Valley, and future plans

Apart from Golden Gateway, Golden Land plans to launch a project in the Klang Valley in the second half of the year. The yet-to-be-named residential project has a GDV of RM255 million and is located in Setia Alam, Shah Alam. Located on 3.59 acres, the development comprises 500 serviced apartments housed in two towers of 33 storeys and 35 storeys.

Yap adds that the project will be kept simple with a few luxury amenities, such as rooftop gardens. “Its design will be modern and contemporary.”

According to the group, more details of the project will be revealed closer to its launch date.

The group is also actively looking to acquire land, especially in the Klang Valley, on top of its 42 acres. “But we do not wish to overextend ourselves,” concludes Ng.