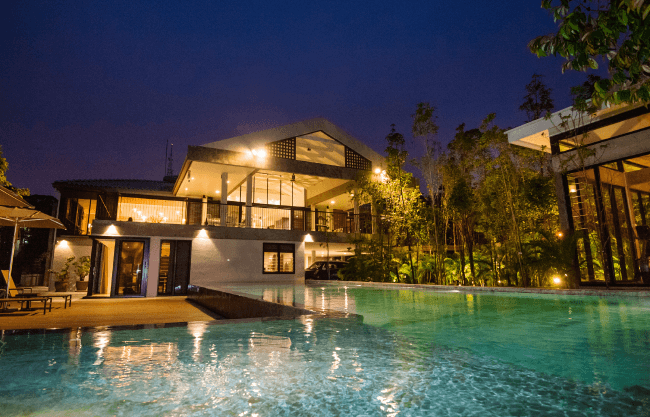 GIVING AN OLD house a makeover is no simple task. It is an exercise in creative problem-solving due to the limitations one has to work with in the existing structure. But when done right, the transformation results in a truly inspired living space — like the Khoo residence in Bukit Gasing.

Built in the early 1980s, the detached house was designed to accommodate three generations of the family. The main floor of the house comprised the kitchen, the dining and TV areas, an open courtyard and the bedrooms. There was also a level below it. The following years saw changes to the house; for one, the courtyard was closed off and turned into a sitting area. There were plans to remodel the kitchen, but the impetus to do it came only after the family welcomed the fourth generation — more space was imperative then.

The family engaged an architect who suggested that another floor be added to the house. “He wanted to preserve as much of the original furniture and layout as possible,” says Johan Khoo. “I felt it was an inelegant solution.”

They began afresh with Tony Heneberry of design outfit 2’s Company, who was recommended by Khoo’s aunt. He immediately saw the potential of the place, in particular its location with sweeping views of Petaling Jaya. It is this commanding vista that the designer latched onto in reconfiguring the spaces of the house.

Prior to the overhaul, the kitchen, which, according to Khoo and his wife Ong Giok Pin, was where the family spent a lot of time, faced the front of the house and the homes across the road. The staircase to the floor below was situated at the centre of the main floor while the TV area, although it had access to the panorama, wasn’t used much by the family except Khoo’s grandmother.

“After a while it became clear that the space was a bit disjointed, although we had plenty of room. It was all in the wrong places,” says Khoo.

Heneberry completely flipped the layout, changing the orientation to maximise the part of the house with the view while the front that faces the neighbours is now windowless to ensure privacy. Ong explains, “He based the layout on the view. He opened up the house basically using what we had. We had this view but we did not take full advantage of it.” 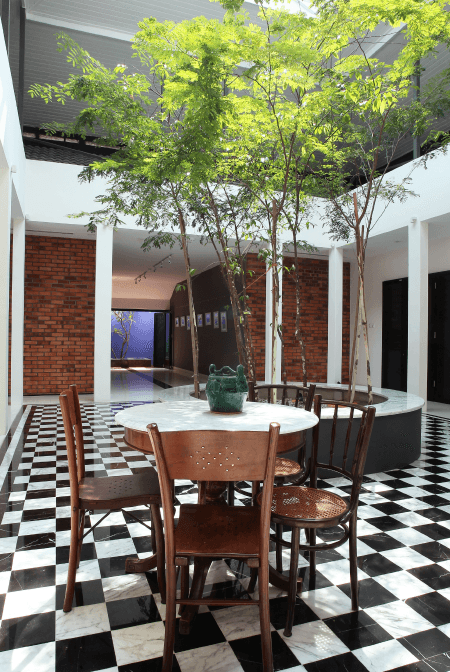 What happened was a re-appropriation of space, beginning with moving the kitchen from the front to where the TV area was — the dry kitchen and dining area share a continuous space with the sitting lounge while the wet kitchen is in a room behind. Floor-to-ceiling glass windows were put it to capture the sweeping view outside and should the family desire privacy and shade from the sun, there are automated horizontal grills that can be activated for the purpose.

Most crucially, the staircase was relocated to the side of the house where the wet kitchen is and the original balcony reclaimed for the interior of the house. A much larger veranda was put in, providing ample room for dinner parties, which Khoo’s father is fond of throwing. The relocation of the staircase resulted in a wide open space that was turned into a spacious sitting lounge complete with a Steinway grand piano and the family altar taking pride of place at a feature wall that is composed of exposed bricks. This is but one of the areas in the house that boast bare brick walls as an accent, not only breaking the monotony but also introducing an interesting textural and rustic element to the space.

The focal point of the main floor is the courtyard that follows the sitting lounge. With its black-and-white chequered tiles, the courtyard has been restored to its original purpose and is anchored by a circular planter box with young Leopard Trees and a rare species called Phaleria Capitata. This delightful feature brings a bit of the outdoors inside.

The courtyard leads to one of the most unique nooks of the house — where once there was a room, there is now a gallery of sorts displaying poignant and provocative black-and-white photographs taken by Khoo and a mini-courtyard. Ong comments, “We broke through the room — the idea was to increase ventilation. The courtyard was Tony’s idea, to open it up a bit.”

This second courtyard is Moroccan-inspired with a pool of water and a frangipani tree set against a deep azure blue wall. It is a truly arresting feature and though the water that flows from the pool stops right at the start of the courtyard, it is visually continued in the form of dark tiles that chart a path into the house.

Across from the apartment is the grandmother’s quarters that comprise a bedroom and TV area. Next to this comes the parents’ en suite bedroom, and that sums up the main floor. The lower level comprises the utility area, a home theatre with a star-field ceiling, two guest bedrooms, Khoo’s home office and a “secret room” concealed by a bookcase, where all the electrical and network equipment is stored.

The office opens out to an L-shaped pool and a deck that took up a large portion of the original garden. So, the perimeter was enlarged. The pool is designed in such a way that when you’re in it, your eyes rest on the PJ skyline in the distance. Next to it is a glass cube that boasts a gym and beyond it a garden dotted with different species of young trees native to Bukit Gasing.

Says Khoo, “Tony had the trees planted for two reasons: to screen out the neighbours a bit and to bring a bit of Gasing Hill into the house. It’s a little bit of a forest.”

To outfit the house, the family worked with freelance interior designer Sophie Buddell, who “challenged us with colours”, says Ong. “If you had left it to me, everything would have been beige,” she laughs. “I’m glad she chose the colours because they really pop.”

And they certainly do —there are vibrant shades of purple (which happens to be a favourite colour of Khoo’s father) and magenta in the sitting lounge as well as in the parents’ bedroom while Khoo and Ong’s resort-like master bathroom features soft turquoise.

The furnishings are a mixture of contemporary pieces and antique Chinese furniture and art. Says Ong, “We didn’t want to lose our Chinese identity, so to speak. That was the challenge: to bring the old and new together. They don’t always mix but we managed to find areas for everything.”

For instance, at the altar, there is a pair of wooden antique Chinese chairs inlaid with mother-of-pearl and a matching table. They have special meaning for they were used for the tea ceremony of a family wedding. On the wall here hangs a sign with the name of the Khoo family’s ancestral village in China — Xing Kang.

“That is actually an old sign that used to overlook the balcony,” says Khoo. “Sophie was very taken by it and wanted to make use of it. Tony said we should have it outside, so he modelled the characters in steel. But we put the sign inside here … to us, it’s a sign; to a Westerner, it’s a piece of art, so they’ve hung it as a piece of art … that’s one of the small things that a different pair of eyes sees — they look at the same object but present it in a different way.”

Another example are the antique Chinese screen doors that were in the parents’ room but which didn’t quite fit in after the renovations. Buddell hung them as artworks in the stairwell. In the main courtyard, a vintage kopitiam table and chairs are perfect to sit down for a spot of tea while other pieces of antique furniture give an old-world touch to the grandmother’s and parents’ rooms.

The renovation and refurbishment process, long-drawn-out though it were, has been a rewarding experience for both the homeowners and designers. When asked about their favourite spots, Khoo and Ong say there are a few.

“Right here [sitting lounge] is one of my favourite spots. I can enjoy the breeze, put on some music and just chill out. I also love my office where I spend a lot of time. But, ultimately, where I get to appreciate the house the most is from the pool,” says Khoo.

Ong chimes in, “I like it out in the balcony. I like to sit there with a cup of tea and my laptop. As a family, I think the dining table is great — it is one of my favourite pieces of furniture. We gather around it to eat and enjoy the house and views as well.” 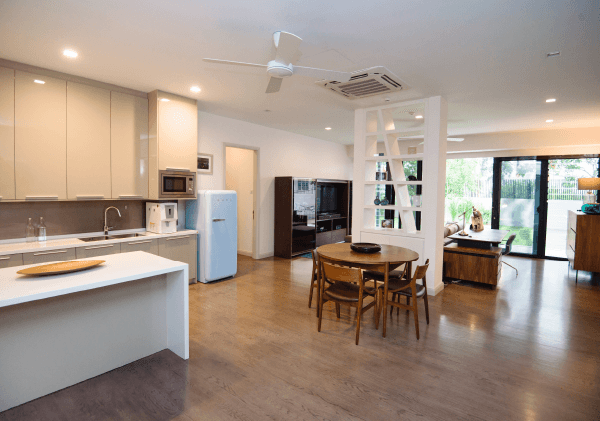 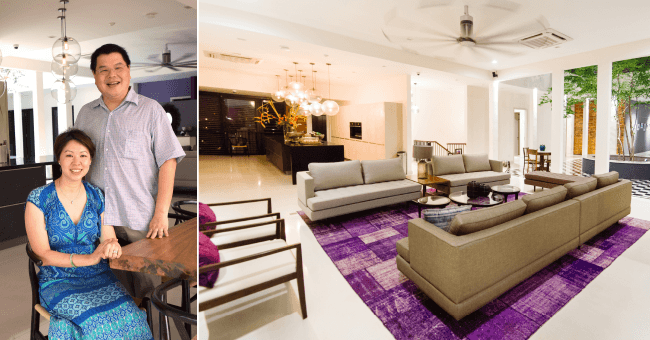