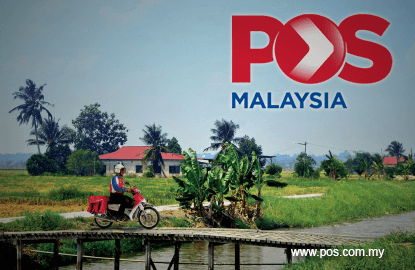 The national postal company attributed the lower earnings to the lower profits from the mail and retail segments, caused by higher transportation cost for transhipment business and recognition of expired postal order in 2QFY15.

However, its revenue for the current quarter came in 7.3% higher at RM398.8 million from RM371.67 million a year ago, underpinned by its mail and retail segments, which registered an increase in turnover of 11% and 15.3% respectively during the quarter.

Going forward, Pos Malaysia said its revenue growth will be mainly driven by the growth in products and services related to e-commerce, namely courier, small packets and parcels products.

Although the e-commerce growth trend is expected to have long-term potential, it pointed out that the softening near-term economic and market sentiments are expected to be challenging for the group's prospects.