MAHB: Waiting for the Chinese to come back

While international pax bounced to a positive 4% y-o-y in December 2014, the 3% y-o-y drop in domestic pax could be due to Malaysia Airlines scaling back capacity.

The shooting down of flight MH17 and the loss of flight MH370 led to a drop in inbound arrivals from China and Europe. The decline in China traffic hit a bottom of -20% y-o-y in August 2014. Europe traffic suffered as well, hitting a low of -6.1%.

As at December 2014, China traffic had dropped to single digits, while the traffic to and from Europe recovered to 1.9% y-o-y. A key catalyst to lure traffic from China would be the proposed waiver on visa fees for Chinese tourists travelling on group tours. The government is currently considering the waiver.

MAHB forecasts a mere 3% y-o-y growth in passengers handled and aircraft movements in 2015. This is lower than our forecast of 6% to 5% y-o-y, as we believe its numbers may be too conservative.

While there are downside risks to passenger numbers after the crash of AirAsia flght QZ8501, the impact could be temporary in light of how efficiently the incident was handled. Furthermore, we expect an earnings upside on the high possibility that the Sabiha Gokcen International Airport in Turkey could be profitable in FY15.

We have also yet to factor in contributions from the opening of Southeast Asia’s largest modern outlet mall — in which MAHB has an associate stake — at Kuala Lumpur International Airport (KLIA) in mid-2015. We maintain “buy”, and keep our discounted cash flow  derived TP of RM8.06. — RHB Researc Institute Sdn Bhd, Jan 13 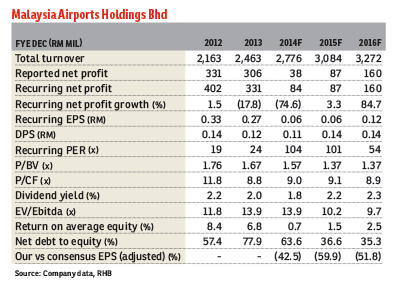