MAHB to issue CPC for klia2 by year-end 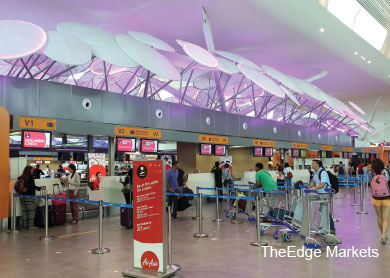 "The contractors' obligation is 97% done. Our goal is to issue it (with a CPC) by the end of the year," he said after a media tour of klia2 in Sepang today.

Joint venture (JV) partners UEM Construction Sdn Bhd and Bina Puri Holdings Bhd (UEM-Bina Puri JV) are the contractor for the main terminal building of klia2. It was earlier slapped with liquidated ascertained damages (LAD) of RM199,445.40 per day for its inability to complete the work by the approval deadline of June 15, 2013.

Badlisham also said MAHB will continue to carry out rectification works on problems plaguing klia2 such as depressions on the taxiway and apron due to soil settlement, since CPCs for these parts of klia2 have already been issued to the relevant contractors.

Asked if MAHB had been "too generous" in issuing these CPCs earlier, Badlisham said the group had ensured that these contractors had met their respective obligations before issuing them.

Badlisham reiterated that the costs incurred in maintenance and rectification are expected, despite klia2 being opened to the public for some six months since May 2.

"The costs incurred for the maintenance and rectification are budgeted. We (had) expected them and are dealing with them accordingly.

"Take soil settlement for example. You cannot predict the land movement, but we will have our eyes on it so as to fix the issue early," he added.

"There are other issues that are just as crucial to other world-class airports, not necessarily cracks and deposition, but they have their own issues," he said.

In respond to the Public Accounts Committee (PAC)'s report on the construction of klia2, Badlisham said he will need to go through the report in detail before deciding on any further course of action.

"We definitely welcome the report as a public listed company. But at this moment, I will need to read it (PAC report) thoroughly before I am able to make any comments," he said.

Badlisham also said that he will discuss with the Transport Ministry with regards to the recommendations made by PAC, including calling for an audit by the Auditor-General on klia2.

"My concern is what kind of audit that they wish to conduct. So, let me talk to the government first," he said.