Many contend that Syed Mokhtar’s closeness to Mahathir has eased his purchases of choice assets, many of which were once government-owned, such as postal services company Pos Malaysia Bhd and national automaker Proton Holdings Bhd. Both companies are notable for their large landbanks.

The former premier does not deny his closeness to Syed Mokhtar but adds, “I think I’m close to almost everybody [who is successful].”

Of Syed Mokhtar, Mahathir says, “He is keen to grow, others are not so keen. Sometimes, where other people do not want to go in [to a business venture], he is willing to go in.”

At its closing price of RM2.30 on Thursday, NCB had a market capitalisation of RM1.1 billion. While NCB is a choice asset, it forms only a small part of Syed Mokhtar’s empire. (See chart)

MMC also closed at RM2.30 last Thursday, giving it a market capitalisation of about RM7 billion. This would value Syed Mokhtar’s 51.8% in MMC at about RM3.6 billion.

Thus, if stripped, MMC could be worth a lot more than its RM7 billion price tag.

However, Syed Mokhtar-linked companies carry high levels of debt. As at end-September this year, MMC had cash and bank balances of RM4.3 billion, long-term debt obligations of RM23.8 billion and short-term borrowings of RM1.9 billion.

Syed Mokhtar’s other main vehicle is DRB-Hicom Bhd, in which he controls 55.9%. It closed last Thursday at RM1.49, giving it a market capitalisation of RM2.9 billion. Assets under DRB-Hicom include the likes of automaker Proton, which owns legendary English sports carmaker Lotus, Bank Muamalat Bhd, Pos Malaysia, Bank Muamalat Bhd, Konsortium Logistik Bhd and a thriving defence company, among others.

Thus it could be argued that DRB-Hicom, like MMC, is undervalued as well. However, as at end-September, DRB’s net gearing level was 56%.

Syed Mokhtar also has a 34.6% stake in garment and show outfit Amtek Holdings Bhd which, at Thursday’s close of 31 sen, had a market capitalisation of RM15.5 million.

He also has an 11.5% stake in Bina Puri Holdings Bhd, or a market value of about RM11 million.

However, calculating the value of Syed Mokhtar’s shareholdings is no simple matter, given his diversified asset base, fragmented shareholdings and the use of proxies.

Then there is also the asset-rich Tradewinds group which he wholly owns, and which in turn owns 100% of rice trader and distributor Padiberas Nasional Bhd. Tradewinds has large property development and plantation operations as well as sugar refineries, among others.

In response to observations about Syed Mokhtar’s sprawling empire, Mahathir says, “But he is focusing on certain areas”. This could mean that while his empire may be large, his core businesses are few.

It could be that Syed Mokhtar acquired the stake in his personal capacity. If the acquisition is by one of his publicly traded companies, then there is yet to be an announcement of it.

It is not clear if Syed Mokhtar is buying into any other airline assets, including national carrier Malaysian Airline System Bhd (MAS), or if he is behind Jentayu Danaraksa Sdn Bhd, which recently proposed to buy ailing MAS.

While it is unclear if Syed Mokhtar is behind Jentayu Danaraksa, his acquisition of Proton in January 2012 created a stir. Many had asked if he had the capacity for the deal, given DRB-Hicom’s high debt levels.

Mahathir says, “He (Syed Mokhtar) made a proposal, but then the proposal was given to everybody, and they (the bidders) all raised their bids, and he had to buy at a very high price. It’s not something that he got easily.

“He had to compete [for it]. He paid more than RM3 billion for a company that is losing money.

“Syed Mokhtar believes he can turn around companies. He has deep pockets [and] the creditworthiness to raise funds. Many of the companies he acquired were in deep trouble and he turned them around,” Mahathir says.

Mahathir may have his reasons, but the general perception remains that Syed Mokhtar has far too many strategic assets of national importance under his belt, and a worrying debt level. 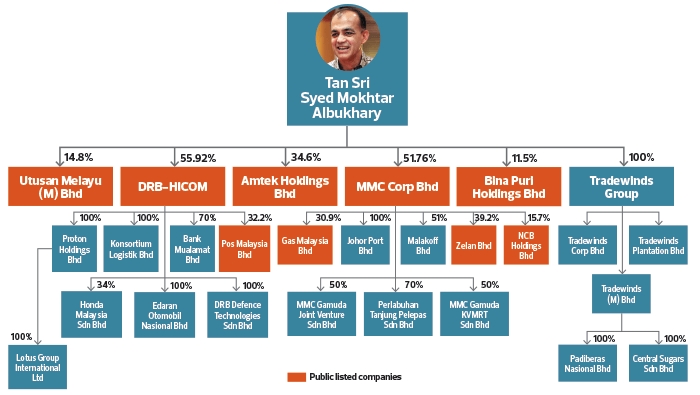