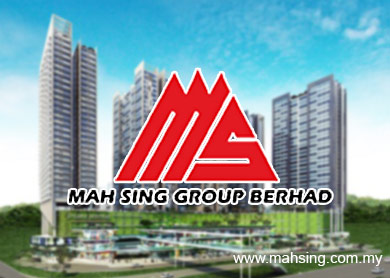 In a filing with Bursa Malaysia, the property developer said its third quarter revenue lept 33% to RM713.6 million, from RM536.5 million a year earlier.

Mah Sing said the higher net profit was due to higher recognition of profit from its Icon City in Petaling Jaya, and M Residence @ Rawang.

The group attributed its higher revenue to the higher work progress from its ongoing development projects.

Mah Sing achieved property sales of approximately RM2.45 billion for the nine-month period, as it focused on the mass market properties at the right locations, in line with market demand.

On prospects for the current financial year, Mah Sing said the Greater Kuala Lumpur market is expected to be sustainable.

This is especially in the new growth corridors benefiting from ongoing and proposed transportation infrastructure projects, such as the MRT, LRT and the Kuala Lumpur-Singapore high speed rail projects.

Meanwhile, the group has proposed a warrant-sweetened rights issue to raise RM630 million, and a one-for-four bonus issue for land acquisition and property development activities.

From the RM630 million, RM370 million has been ear-marked as part-payment for land in Negeri Sembilan and Puchong, said Mah Sing in a separate filing with the stock exchange.

Mah Sing said the RM370 million will be used to replenish a previous payment made for the Seremban and Puchong land, as well as to fund payments over the next 12 months.

The proposed rights issue and bonus issue are expected to complete by the first quarter and third quarter next year respectively, following approvals and barring any unforeseen circumstances.

Mah Sing ended flat at RM2.31, with a market capitalisation of RM3.41 billion.