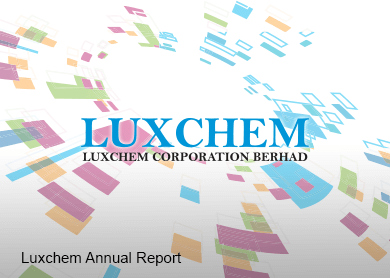 In a filing with Bursa Malaysia today, the industrial chemical supplier explained that the sharply lower net profit was caused by RM8.48 million of share option expense that was charged to the profit and loss arising from the Employee's Share Option Scheme (ESOS). The sum was included under administration expenses.

An expense of RM8.48 million is a considerably large sum for Luxchem given that its quarterly net profit has been below RM6 million over the years.

According to the company’s latest annual report, Luxchem granted a total of 31.98 million options to eligible employees, out of which 403,000 options were exercised at an exercise price of 71 sen per share. Consequently, the same number of shares were issued on March 11 and listed on March 17.

"For the current quarter, after taking into account the share option Expense of RM8.48 million, the group reported a Profit before Tax (PBT) of RM4.88 million.

"This is a reduction of RM1.79 million or 26.8% compared to the PBT achieved during the corresponding quarter in the preceding year of RM6.67 million," it added.

It said the expense has been included under administration expenses.

The fair value of the share option granted during the reporting quarter was 26 sen per option, according to announcement.

Going forward, Luxchem remained with its prospects despite the fluctuations in exchange rates and raw material prices will continue to be a challenge to it.

The company’s share price has staged a rally since the start of the year. The stock has climbed from 82 sen in January to record high of RM1.29 last month. It closed at RM1.19 today, for a market capitalisation of RM310.35 million. Year to date, it has gained 45% or 37 sen.