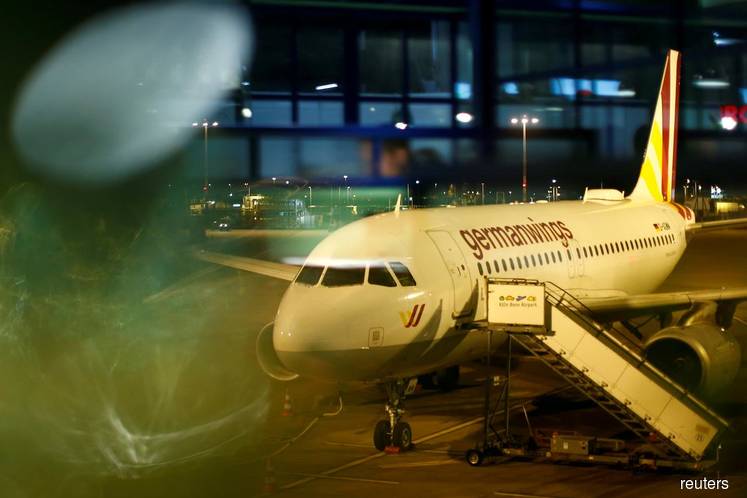 FRANKFURT (April 7): Lufthansa will close its Germanwings low-cost airline as part of a broader overhaul including capacity cuts across the group, it said on Tuesday, as it warned it could take years for the industry to recover from the coronavirus crisis.

The group, which also owns the Austrian Airlines, Swiss and Eurowings brands, said the coronavirus had forced it to accelerate radical restructuring steps.

Its shares were up 1.1% in late trading.

"It will take months until the global travel restrictions are completely lifted and years until worldwide demand for air travel returns to pre-crisis levels," it said.

"Based on this evaluation, today the Executive Board has decided on extensive measures to reduce the capacity of flight operations and administration long term."

Global airlines said on Tuesday that 25 million jobs across the world could be at risk from the coronavirus travel downturn and the industry's representative body IATA said airline finances were so fragile, they could not afford to refund customers for canceled flights.

"Germanwings flight operations will be discontinued. All options resulting from this are to be discussed with the respective unions," Lufthansa said, confirming what two sources had previously told Reuters.

The fate of Germanwings has hung in the balance as the low-cost sector came under pressure, and after a suicidal pilot deliberately flew a jet into a mountainside in 2015, killing all 150 people on board.

To slash costs Lufthansa will also cut capacity at its hubs in Frankfurt and Munich, including reducing the number of aircraft in service for Lufthansa and Eurowings, it said.

A further 11 Airbus A320s will be withdrawn from short-haul operations and Lufthansa Cityline will withdraw three Airbus A340-300 aircraft from service.

In addition to grounding the Germanwings brand, Eurowings will cut back its long-haul business, Lufthansa said. "All options resulting from this are to be discussed with the respective unions," it said.

Restructuring programmes already initiated at Austrian Airlines and Brussels Airlines will be intensified and both companies are working on reducing their fleets.

Lufthansa's overhaul is the latest shakeout in an industry ripe for consolidation.

Whereas four airlines control 80% of the U.S. market, Europe has remained fragmented, with the budget segment already in trouble before the coronavirus struck and Lufthansa's rivals Germania and Air Berlin put out of business.

Cutting back low-margin Germanwings may help its parent survive at a time when even large rivals like Air France-KLM are in talks to receive billions of euros in government guaranteed loans.

Lufthansa has idled more than 90% of its fleet since the virus outbreak and has already held talks with the German government on providing liquidity including through special loans from state development bank KfW.

Lufthansa is working on a package to raise money from the debt and equity markets, two sources familiar with the matter said. Lufthansa declined comment on its financial steps.

The plan, which has yet to be finalised, could include a combination of convertible bonds, the sale of new shares and a rights issue of new stock, the sources said, adding it could happen within the next two weeks.