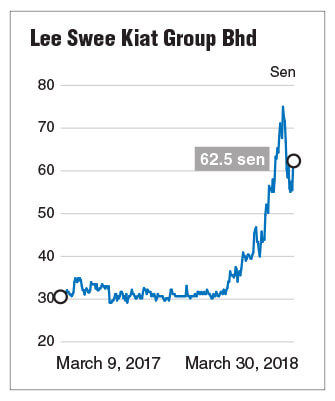 KUALA LUMPUR: Lee Swee Kiat Group Bhd (LSK) may have achieved a record high revenue and net profit for the fourth quarter ended Dec 31, 2017 (4QFY17), but the latex bedding manufacturer is not resting on its laurels.

The group is on track to see an even stronger revenue and profit growth in the next two to three years as it has recently signed on new customers in the US and China.

In an interview with The Edge Financial Daily, Kong Sim said this means profit margins are likely to trend higher than before, given that production runs mostly on fixed costs.

LSK, which posted a 41.73% growth in net profit to RM3.02 million in 4QFY17, from RM2.13 million a year earlier, has already seen financing costs coming down by 26.9% during the quarter along with a fall in material costs due to a drop in the average price of centrifuged latex.

This enabled LSK to increase its volume of latex production in 4QFY17 by 48% to 1,290 tonnes on the back of strong demand for latex bedding, which boosted sales in both export and domestic markets.

Securing a US-based customer represents LSK’s entry into the North American market, even as it continues to expect growth from its key customers in Asia.

In particular, the group has continued to see strong growth in sales in South Korea, a market in which it enjoys a dominant position due to the group’s reputation for offering high-quality products, said Kong Sim.

The aggressive growth in its exports, however, is unlikely to upset the composition of LSK’s revenue, which currently comprises 53% of exports, as it is also committed to growing its brands in Malaysia, which include Napure, ViscoPedic and Meta.

Additionally, the group bought the trademark for US brand Englander in 2015 and has seen growing sales from the brand ever since, Kong Sim said.

In light of a growing customer base, LSK has been expanding its capacity for the production of natural latex. Its current facilities are already fully utilised, even after the acquisition of a small mattress manufacturer last year which boosted capacity by 30% to 50%.

“We are adding two new production lines by end-2018 that will increase capacity from 4,000 tonnes to 6,000 tonnes,” Kong Sim said, adding that the lines are now in the final stage of commissioning.

On top of that, LSK is also looking at introducing more automation in the manufacturing process, which Lee believes could increase the group’s output by 20% to 30%.

“We are currently in talks with German companies,” he said, with regard to new automated lines that are targeted to be rolled out by 2020.

Another area the bedding manufacturer has set its sights on is the e-commerce space. According to Kong Sim, the group has seen encouraging response for its products on Chinese online marketplace Taobao and it is planning to explore e-commerce opportunities on a much bigger scale.

“This is part of our plan to go direct to our customers and cut out the middle man,” he said, adding that LSK has been in talks with Alibaba and its peers, and is currently on a learning curve.

Going online will also create potential for regional expansion and penetration into Southeast Asian markets via e-commerce, as LSK has met challenges in opening physical stores in other Asean countries.

“We will work with big logistics companies as partners,” Kong Sim said, sharing that these ambitions could materialise within the next two to three years.

The group is also mulling plans to convert its sub-performing IBG (International Brands Gallery) stores into what Kong Sim calls a “sleep experience centre”. The centres will offer customers a physical experience of the group’s products before purchasing them online.

This would merge the online store with a physical experience as well as offer customers the convenience of having the mattresses delivered directly to their homes, Kong Sim said.

RHB Research highlighted LSK in its Feb 28 trading idea note, saying that growing demand for the group’s products, imminent production expansion, strengthening financials under the helm of a prudent management, and possible elevated dividends are likely to support a potential steady growth in earnings.

The research house gave an indicative fair value of 68 sen for LSK’s stock, representing a premium of five sen or 7.94% to its last traded price of 63 sen last Friday. It pointed out that the stock is trading below a one-year average forward price-earnings ratio of 17 times for other consumer players, excluding food and beverage firms.

The stock has come off its record high of 77 sen on March 14, representing a spectacular gain of more than double its opening price of 37 sen at the start of the year.

Kong Sim’s brother and the group’s executive director, Lee Kong Yam, took the opportunity on the share price weakness to acquire an additional 108,000 shares on March 19 on the open market, increasing his direct stake to 1.64%. At the time, the stock closed at 69 sen.

The family controls a 51.57% stake in the group via Lee Swee Kiat and Sons. Kong Sim himself holds a 6.84% direct stake while founder Lee Swee Kiat (who is his father) has a direct 1.82% stake.

Kong Sim said the family’s purchase of shares reflects its belief that the group has much upside earnings potential, and the stock is undervalued.

Meanwhile, he believes the group’s excess cash was put to good use with share buy-backs, since it was in a net cash position of RM8 million at the end of last year versus RM3.7 million as at end-2016.

This will give it the option of reissuing the shares in the future if the group decides to embark on mergers and acquisitions. Additionally, it could declare dividends at a higher value to shareholders while lowering costs for the group, said Kong Sim.

Kong Sim said LSK has decided to fix a dividend payout policy of at least 30% of net profit, four years ahead of its initial plan to begin declaring dividends by 2020.

On top of an increase in net profit, LSK has also seen its cash pile grow. The group achieved a net cash position in 4QFY16 for the first time since its listing in 2004.

Kong Sim pointed out that the group’s current net cash position of RM8 million is an increase from RM3.7 million at the end of FY16, and a significant turnaround from its peak borrowings of RM38 million in 2008.