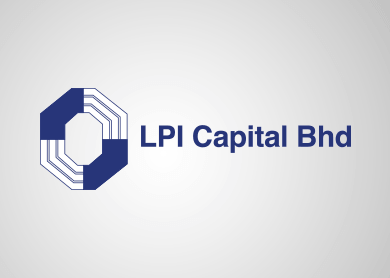 KUALA LUMPUR (Jan 29): Top gainer LPI Capital Bhd rose as much as RM2.78 or 15% after the insurer reported fourth quarter profit more than doubled from a year earlier, and proposed a dividend, and bonus share issue to reward shareholders.

Full-year net profit climbed to RM283.02 million from RM201.44 million a year earlier while revenue was higher at RM1.17 billion versus RM1.12 billion.

LPI plans to pay a dividend of 55 sen a share in 4QFY14, bringing full-year dividends to 75 sen. The company also proposed a bonus issue of new shares on the basis of one bonus unit for every two existing shares held.

Today, analysts, however, said they were mindful of the high base in LPI's FY14 profit, which could lead to lower profitability in current FY15.

"We adjust downwards our FY15 earnings estimate (-7.5%), after imputing a slower growth in premiums underwritten, and lower investment income from the group’s reduced stake in PBBANK," Tan said.

Tan said Kenanga downgraded its call for LPI shares to "market perform" with a lower TP of RM19 from RM19.10 previously.