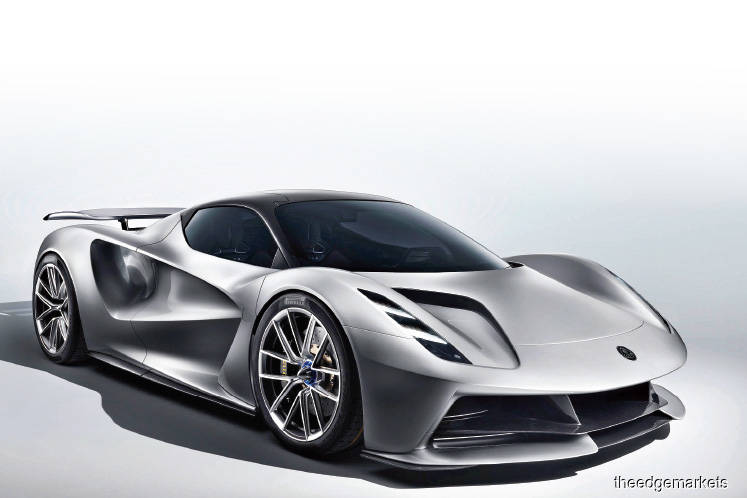 Since it is a British-built hypercar, the Evija comes with a small Union Flag badge located on the C-pillar. But if the owner wanted, it could be another flag, a family crest, or a personal logo.

The 1,972-horsepower coupe will be the first developed under Lotus’ parent company, billionaire Li Shu Fu’s Zhejiang Geely Holding Group Co, which also controls Volvo Car Group, and will be the halo for the rest of the Lotus range that includes the Elise, Exige, and Evora.

Geely teased the Lotus Evija back in April at the Shanghai Auto Show as a “statement of intent” for the company over the next decade. “Electric is part of the strategy going forward,” Lotus chief executive officer Phil Popham said at the time. “For Lotus, it has to be all about the driving experience — and electric will drive the value of every car we make.”

It will be the first all-new car from the English automaker in 11 years. The name, pronounced e-VI-ya, is derived from variations of Eve (as in “Adam and ... ”).

Evija has a one-piece carbon fibre monocoque chassis, a very low ride height of just 105mm (four inches) off the ground, and an electric power train developed by Williams Advanced Engineering, the same company known for motorsport success in Formula One (F1) and Formula E. The mid-mounted battery pack is located behind the two racing seats of the car, which weighs just 3,703 pounds (1,679.65kg) — lighter than a Ferrari California.

From the outside, Evija looks chiseled to the bone with huge cut-out sides and massive front splitter. Its two dihedral doors are operated by the key fob instead of handles. The rear has a large wing and oblong laser taillights; the car uses lasers for both main and dipped headlight beams as well. Little lenses that look like wings on the thin vertical headlights form the daytime running lights and turn signals. They are set off with 20- and 21-inch magnesium wheels in the front and rear, respectively.

Lotus design director Russell Carr said the Evija’s looks are totally functional, right down to down-force-increasing air tunnels through the body of the vehicle made possible by the lack of a conventional engine.

The company might compromise on that ethos, though, when it comes devising a noise to replace the rumble of an internal combustion engine. “We’re working on the sound at the moment,” Carr said in an interview. “I’d personally like it to be authentic, because to me the way the car looks is the noise. But there are various views.”

Lotus plans to settle on single tone that could rise and fall as the car accelerates and which would be carried forward to future electric models, though owners might also be able to download their own favoured engine sounds.

Under the hood, the four-wheel-drive car has five drive modes: Range, City, Tour, Sport, and Track. It will be able to hit 62mph (99.78kph) in less than three seconds. Top speed will exceed 200mph. The total driving range will be 250 miles on one charge of the mid-mounted 2,000kW battery — a power pack eight times stronger than that of a Formula E race car. Using a 350kW charging unit, it takes 12 minutes to charge the car to 80% of full and 18 minutes to get a full charge.

Inside the cabin, Evija will be the first Lotus ever to contain full modern digital infotainment, which will receive periodic software updates much like Teslas. (Recall that Lotus helped build the first Tesla Roadsters.) Drivers can use a new Lotus smartphone application to monitor the car from anywhere in the world, check the battery charge status, potential current driving range, and other things such as remotely turning on the heat or the air conditioning prior to them getting inside. At the track, a chronograph system in the application allows the driver to record lap times and then review the performance compared with past sessions.

Production of the Evija will be limited to 130 units and will begin next year in Norwich, the UK. Pricing starts at £1.7 million (US$2.1 million or RM8.74 million), with a £250,000 deposit required to secure a production allocation. — Bloomberg