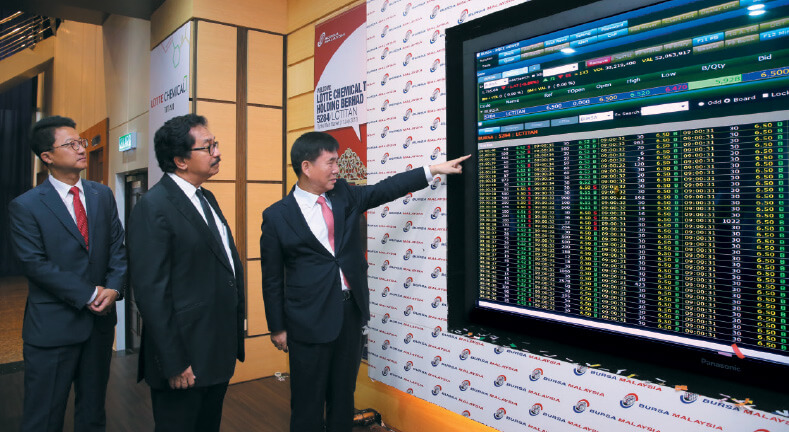 KUALA LUMPUR: Lotte Chemical Titan Holding Bhd (LCT), which returned to the Main Market of Bursa Malaysia yesterday, is confident in its growth prospects in light of stabilising prices of crude oil, which makes up its core feedstock.

However, it is not the same for some investors judging by the share price performance on its listing day.

The petrochemical group opened at its revised initial public offering (IPO) price of RM6.50, and hit RM6.53 shortly after the opening bell. Then it drifted south, touching a low of RM6.33. The stock closed at RM6.38 yesterday, down 12 sen or 1.85%.

Trading volume was large at 292.8 million shares, making it the second-most actively traded counter on Bursa.

In a filing with Bursa in the evening, Maybank Investment Bank Bhd said it had bought 17.1 million shares in LCT to stabilise the group’s share price. It bought the shares at RM6.4718 apiece, for RM110.67 million in all.

LCT is the largest IPO since 2012 on Bursa, and the second counter that ended the listing day below the IPO price after KIP REIT this year.

Speaking to the press after its listing ceremony, LCT vice-president (corporate planning) Philip Kong said that the company, as a cracker operator, is comfortable with crude oil prices at US$47 (RM202.10) per barrel presently.

“At this moment, the spread from the conversion of polyolefin into feedstock naphtha is still at US$700 per tonne. This is a very comfortable [level] for us.

“Oil prices [have] traded between US$30 and US$60 per barrel over the last three years. We believe that there will be no sudden spike in the pricing in the next two years, and we are comfortable with anything below US$60 per barrel,” he said.

Crude oil contains ethane, which forms the base of olefin and polyolefin products. LCT produces both bases, and currently operates three naphtha cracker plants in Indonesia and Malaysia combined.

Kong is betting on Southeast Asia as a “strong demand growth area” for its products in the next three years, brushing off claims that the market is oversupplied.

“We believe the market can absorb [the supply] of polyolefin products, and independent market researchers share a similar view,” said Kong.

On its US$3 billion shale gas project, Kong said the group had secured full funding for its joint venture with its 74% shareholder Lotte Chemical Corp for the project, which involves the development of an ethane cracker complex and a monoethylene glycol plant there.

“The US shale project is meant for North American, Chinese and European markets,” said Kong.

He was responding to pundits’ views that the market for polyolefin is oversupplied, subduing investor interest in its IPO.

LCT’s IPO was priced at RM6.50, down from RM8 established in its prospectus. It was also downsized by about 33% via a cut-down in issuance to institutional investors after a “price discovery” review.

“Our principal adviser has determined [that a] share price at between RM7.60 and RM8 as [the] fair value, but ultimately, the price is a function of demand and supply. Our decision was [made] in order to secure long-term, high-quality foreign and domestic institutional investors.

“Market researchers are confident in our spread and profitability over the next two years, and we hope that it will be reflected in the aftermarket value [of LCT’s share price],” said Kong.

With the proceeds being lower than the RM5.9 billion initially planned, LCT has cut down the allocation to fund its RM15 billion Indonesian integrated petrochemical facility from up to RM4.9 billion to RM2.8 billion.

Kong is, however, confident that the group has enough internal funding to make up for the lesser amount. “As at [the] first quarter, we had cash of RM425 million,” he said, emphasising the group’s cash position, while not discounting the possibility of opting for borrowings.