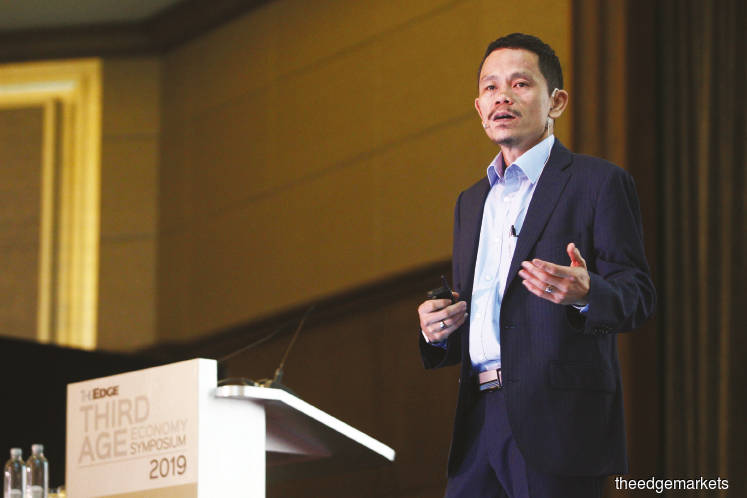 Our national savings rate is high but if you take away the EPF savings, the rate turns negative. > Nurhisham

Malaysians already face multiple challenges when it comes to planning for their retirement years, such as a lack of savings and rising medical costs. These problems will be compounded in the coming decades, thanks to longer life expectancy and lower economic growth, which would impact interest rates and investment returns.

In his keynote address last week entitled “The Third Age: The End of the Beginning, not the Beginning of the End”, Nurhisham Hussein, head of the economics and capital market department at the Employees Provident Fund (EPF), said Malaysia, which is currently the second fastest ageing country in the world, is expected to become an aged nation in about 25 years.

An aged nation is one whose post-working citizenry — those aged 65 and above — constitutes 14% of the country’s population. He also pointed out that the elderly population is expected to almost double to 4.9 million from 2015 to 2030.

“Right now, Malaysia’s population growth is about 1% a year while that of the elderly is about 5%, and expected to grow faster.”

When this happens, there will be negative implications for economic growth and, in turn, for investment returns in the next few decades. Nurhisham explained that the economic growth of a nation tends to trend lower when a large percentage of its population ages and its workforce shrinks.

“What happens when the workforce-to-population ratio falls is that economic growth will slow. By 2040 or so, we expect Malaysia’s economic growth to slow to about 3% from roughly 4% to 5% [today]. This has a lot of implications for interest rates and the [rate of] returns from investments.

“If you look at what actually affects the fixed-income market, one of the best models for forecasting is via demographics. And we can strongly see that when the population ages, the interest rate drops.”

Citing World Economic Forum data, Nurhisham said the number of octogenarians (aged 80 to 89) is expected to increase to one billion by 2050 from 134 million today. As for centenarians (those who live to or beyond 100), the number could increase to four million from 500,000 today. “It won’t be surprising if global life expectancy hits 100 in 2100.”

Living longer means Malaysians will have to contend with higher medical costs, which rise as a person gets older, said Nurhisham. For instance, the medical cost for an 80-year-old is twice that for a 60-year-old. He added that medical costs are unlikely to go down due to a lack of productivity growth in the healthcare sector.

“This is a problem that many countries are grappling with. Productivity growth in the healthcare sector has remained zero for generations. In some cases, it is actually negative,” said Nurhisham, adding that this is despite advancements in medical science having prolonged life expectancy over the years.

He also pointed out that many Malaysians are not contributing enough towards their retirement. EPF statistics show that two out of three EPF members aged 54 have retirement savings of less than RM50,000, putting them at risk of living below the poverty line.

He said 50% of EPF members above the age of 55 exhaust their savings in five years while 31% of them achieve savings of around RM228,000 when they turn 55. “The challenge that the EPF and the government are facing now is to address retirement adequacy. People don’t have enough money for retirement.”

Nurhisham said the lack of retirement savings could be due to the low financial literacy of Malaysians. According to the S&P Global Financial Literacy Survey 2015, Malaysia is ranked a low 66th. “The survey asked five basic questions, like what is compounding interest and inflation, but Malaysians could hardly answer them.”

Nurhisham also said this partly contributed to the high number of bankruptcies in the past four years (more than 100,000 people were declared bankrupt) while Malaysian household debt is one of the highest in Asia.

Another result of low financial literacy is that Malaysians are generally not saving enough, said Nurhisham. “Our national savings rate is high [when you look on the surface]. But if you take away the EPF savings, the rate turns negative.”