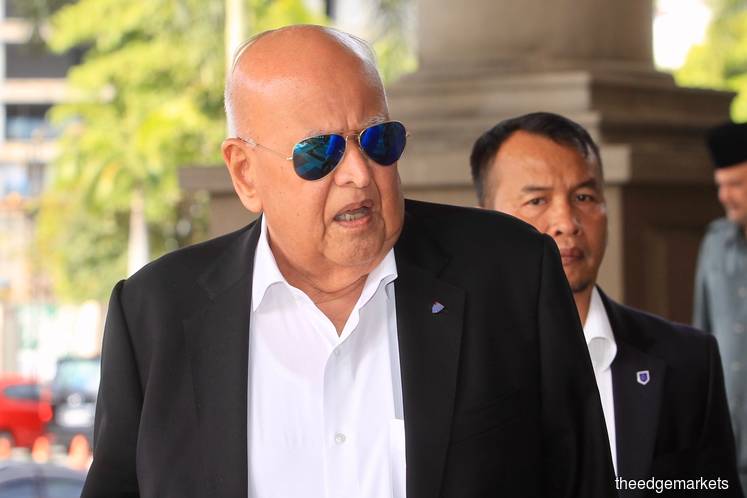 Speaking to theedgemarkets.com over the telephone, Sri Ram said the longhouse residents have been waiting for decades for permanent affordable housing.

"It's been 36 years since [the] longhouse people were promised accommodation and DBKL is doing its best to deliver it to them. DBKL asked me whether I would do it free of charge for them, and I said yes," Sri Ram said.

The 100-odd families occupying the longhouse are former Bukit Kiara Estate workers who were relocated to the area in the early 1980s. They have remained there since as efforts to provide permanent housing have failed to take off.

When asked whether he would be able to manage the additional workload, given he is also the lead prosecutor of the 1Malaysia Development Bhd (1MDB) cases, the former judge said: "It is not rocket science."

"It is not a very complex case [to work on] and I have help from fellow counsel Mr B. Thangaraj. In fact, I was ready to argue the case on Friday itself, but it was only a hearing of the preliminary objection and the court has scheduled a different date for the hearing."

Separately, the Federal Territories (FT) minister's office clarified yesterday that DBKL is not paying for Sri Ram's services as its legal counsel in the Taman Rimba Kiara development case.

"He had offered his services pro bono to DBKL for the case. When the offer was referred to the legal firm representing DBKL in this case, the firm agreed to accept the offer," said the minister's office in a statement.

"Therefore, claims that DBKL is spending a steep sum for his services are false and baseless," it added.

The hearing concerns an appeal by TTDI residents over the dismissal in November 2018 of their judicial review request seeking to challenge the development. The residents were seeking a certiorari order to quash DBKL's approvals on the project, which includes a 29-storey apartment with 350 units of affordable housing, as well as eight blocks of serviced apartments and eight storeys of parking facilities.

The controversial development is undertaken by property developer Malton Bhd. Malton, via its subsidiary Memang Perkasa Sdn Bhd, is driving the development in a joint venture with Yayasan Wilayah Persekutuan (YWP), a foundation chaired by FT Minister Khalid Samad. DBKL approved the development back in 2014, under the previous federal government.

From the TTDI residents' perspective, the 10.08-hectare Taman Rimba Kiara is a public park and green lung for the city. Malton and YWP have maintained all approvals were obtained lawfully and due processes were observed. DBKL approved the joint venture in 2014, under the previous administration.

Amid the stir caused by Sri Ram's appearance, the TTDI residents are questioning as to why a former judge would take up the case and whether payment for his services — seen as steep, given his experience and expertise — would come out of DBKL's purse, which is essentially public funds. Another question raised over the weekend was why DBKL did not get representation from the Attorney-General's Chambers (AGC) instead.

To be fair, statutory bodies including DBKL are entitled to appoint their own legal counsel in court proceedings without going through the AGC, and retain the right to seek the best defence available to protect their interests.

The revision would cut the development's gross development value (GDV) of RM3 billion by approximately half. However, most TTDI residents rejected the plan and are seeking to stop the development entirely.

The residents also accuse Khalid of conflict of interest, as his ministry oversees DBKL, the regulatory body for the development, while also having commercial interest in the development via YWP and had repeatedly urged him to step down as YWP chairman to resolve the conflict. At the original RM3 billion GDV, YWP's profit share is RM160 million.

Interestingly, another member of the federal administration, Deputy Women, Family and Community Development Minister Hannah Yeoh, is also publicly backing the TTDI residents against the project. Yeoh is the member of parliament for Segambut, which includes TTDI.

Khalid, on the other hand, is seen to be leaning towards allowing the development to continue.

In an exclusive interview with The Edge last July, he defended his involvement in the foundation as necessary for the wellbeing of FT residents through YWP's charitable activities. He said he saw no problem with the dual roles, adding more transparency and proper disclosures are the way to manage potential conflict.