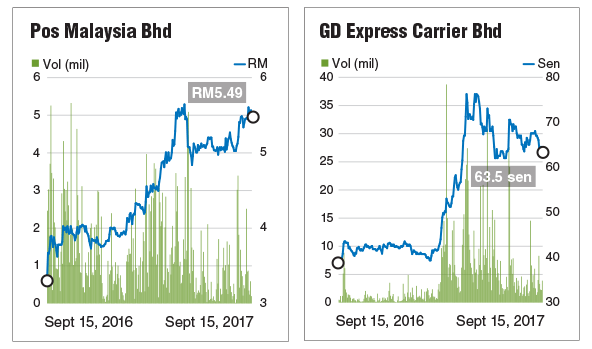 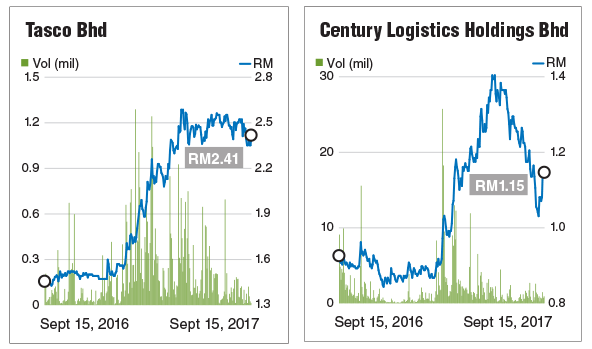 KUALA LUMPUR: The run-up in logistics counters this year has been impressive so far, fuelled by anticipation of an e-commerce boom in Malaysia that is expected to drive parcel delivery volume growth.

However, any investor for a deal wants to see the returns. Likewise, market analysts told The Edge Financial Daily that the run-up in valuations now has to be justified by earnings growth.

“To be honest, it’s a bit risky to go into courier players at the moment, as their share prices have gone up significantly. For now, earnings need to come in first as investors need evidence that the growth is sustainable,” Hong Leong Investment Bank Research analyst Lim Sin Kiat said.

Affin Hwang Investment Bank’s latest strategy report, dated Sept 6, also highlights the transportation and logistics sector’s performance has been below expectations, and that it expects the sector to remain “neutral” for the remainder of the second half of this year.

Pos Malaysia Bhd, the market leader in the domestic parcel delivery segment, gets an “underperform” call from Kenanga Research’s Steven Chan. “While parcel revenue continues to post double-digit growth, we believe that forward growth rates could see some challenges amid increasing competitiveness in the industry,” Chan said on the outlook for the courier business.

It is understandable, since Pos Malaysia is now trading at about 36 times its forward price-earnings (PE) ratio, higher than some comparable peers in other countries, such as the US’ United Parcel Service Inc at 19 times its forward PE, and Singapore Post Ltd (SingPost) at 25 times.

Bloomberg data show the 12-month target price (TP) for Pos Malaysia is RM5.06; the stock closed at RM5.49 last Friday. Similarly for GD Express Carriers Bhd, the consensus 12-month TP is 55 sen; it settled at 63.5 sen on that same day.

A fund manager said logistics players have seen their share prices advance rapidly amid strong buying interest, thanks to the hype in the e-commerce growth story. However, with increasing competition in the space, investors are starting to pay attention to whether earnings growth could be sustained.

“A lot of buying euphoria has caused the rally in logistics counters, especially those involved in parcel delivery. I think investors are looking at the numbers now and if they fail to meet expectations, we should see some selldown,” he said.

“Also, the fourth quarter of 2017 (4Q17) should be a seasonally strong quarter for courier operators, given the Singles’ Day sales in November and festivities in December,” she said.

Hence, she expects logistics companies under RHB Research’s coverage “to generate a two-year net profit CAGR (compound annual growth rate) of about 25%, driven by an improved trade outlook and accelerated growth of e-commerce in Malaysia”.

Besides Pos Malaysia and GD Express, other logistics players under RHB Research’s coverage include Tasco Bhd and Freight Management Holdings Bhd. Its top pick is Pos Malaysia, with a TP of RM6.30, the highest TP among the analysts that cover the company, indicating a potential gain of 14.8% from its last traded price.

“This is [a] given [considering] its market leadership in the domestic parcel delivery segment and our expectations that it can leverage on its wider traditional mail operations for its courier services,” she said in a report last Friday.

However, for GD Express, Foong calls for a “sell” on the stock, highlighting its current valuation of 103 times its forward PE, indicating it has run ahead of its fundamentals. Nevertheless, she noted the company is well run and has a strong earnings growth track record, with supportive strategic partners and investors.

The Edge Financial Daily had reported last year the entry of CJ Korea Express, South Korea’s biggest logistics provider, would springboard the group into the e-commerce and parcel delivery space.

Indeed, Century Logistics is gearing up to kick off its parcel delivery services next year. According to Affin Hwang Investment analyst Koh Sin Yee, Century Logistics will add 50 trucks to its fleet by year end and plans to engage third-party agents to reach smaller towns in Malaysia.

“Though Century is a new kid on the block in the last-mile delivery service, CJ Korea’s expertise and technology will ensure the smooth running of the parcel delivery segment,” she said.