Living: On the street where you live 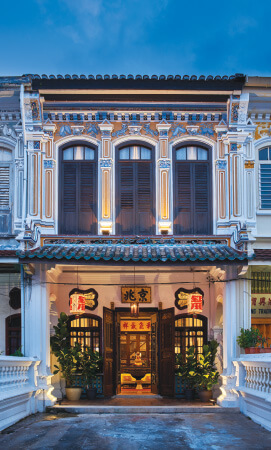 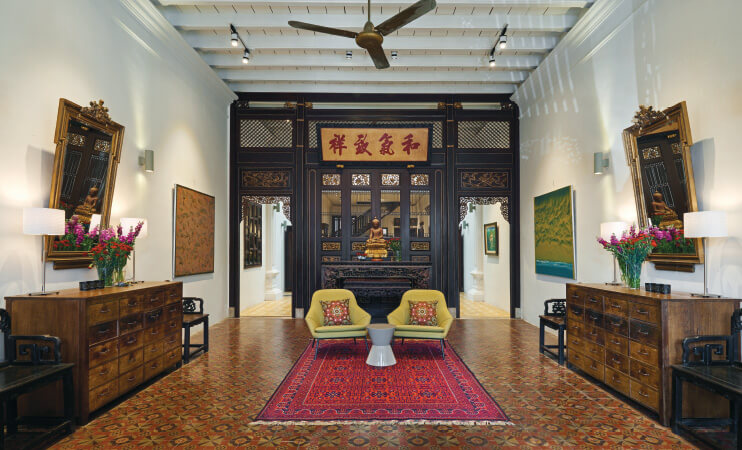 The ruang tamu (guest hall) is where visitors are received 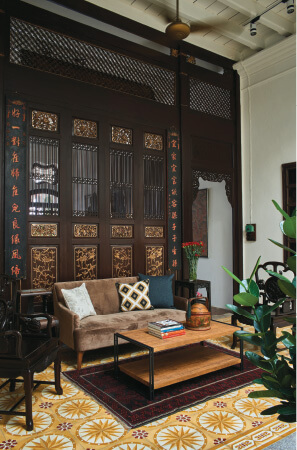 “Built in 1903, the house, once the property of a famous Chinese towkay named Khoo Houn Yeang, maintains its late-Straits Eclectic elegance...” 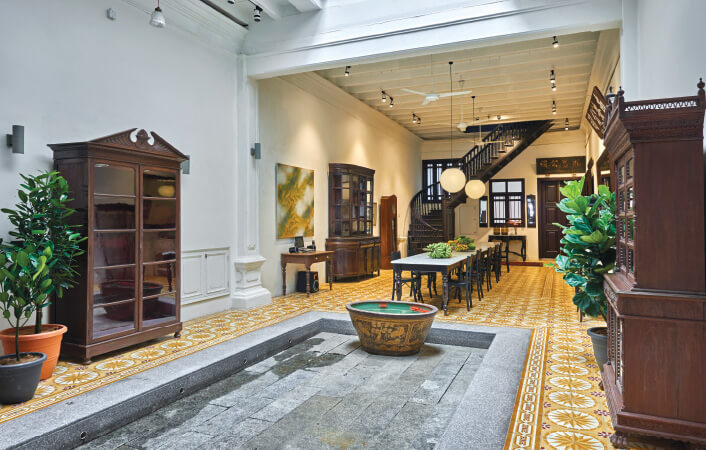 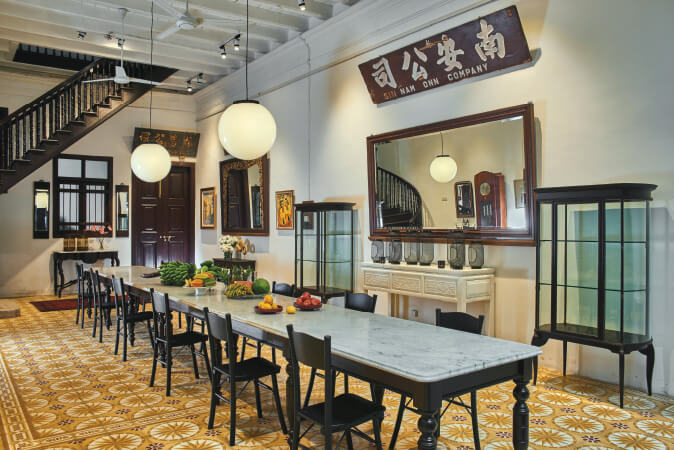 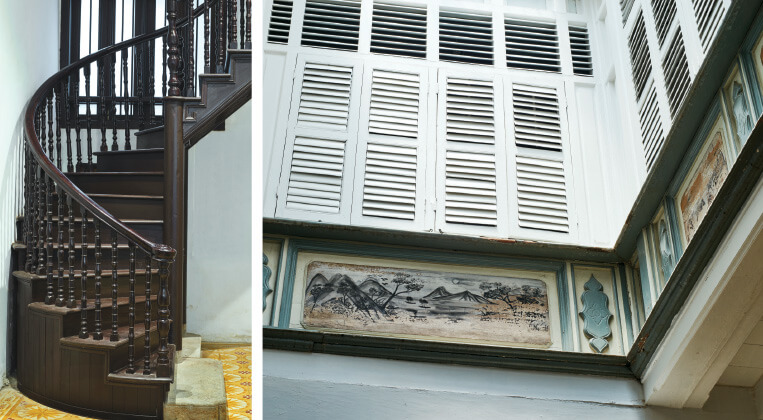 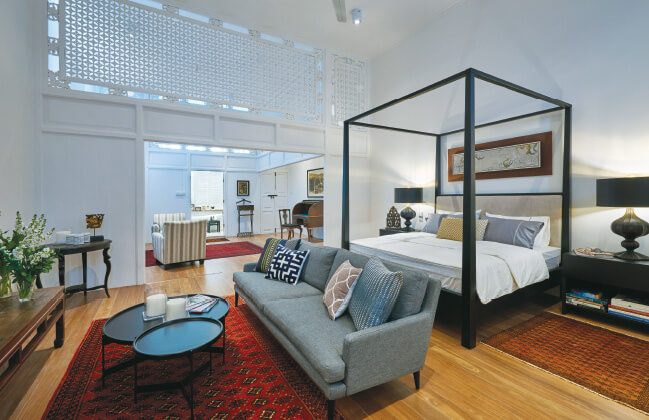 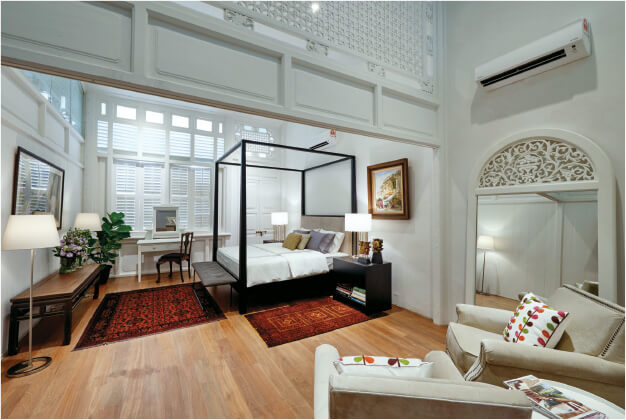 A historical Category II shophouse, located in Kimberley Street and nestled within the Unesco World Heritage Site of George Town, Penang, gets a new lease of life as a home away from home for Nibong Tebal businessman, Gooi Kok Wah.

Fans of Penang’s justifiably famous street food would, no doubt, be familiar with Kimberley Street. Named after John Wodehouse, the first Earl of Kimberley, who was the British secretary of state for the colonies, Kimberley Street, today, is a popular thoroughfare that adjoins Penang Road and Carnarvon Street. It is particularly famous for its hawker delights, which may range from koay chap to the ubiquitous fried kway teow or, for foodies in the know, an ethereally crispy or chien (oyster omelette), which may be found during the day at the top end of the street.

This lively vibe was what initially attracted the attention of Gooi Kok Wah, a businessman from Nibong Tebal who deals in salvaged timber and vintage furniture, and who purchased the shophouse at No 39 in 2012. “I’d found out about this house through a client of mine in George Town,” he says. “I like this street very much as it is located in a vibrant neighbourhood and offers great access to shops, street food and all the attractions of Penang, like the nearby Armenian Street. Families will also appreciate the proximity of modern shopping malls and all the amenities you’d require, all close by.”

Built in 1903, the house maintains its late-Straits eclectic style, distinguished by its full-height Venetian window with fan lights and internal balustrade and, to the delight of passers-by, highly decorative plasterwork featuring garlands of Sino-European flora as well as architraves, pilasters and cornices. Once an Indo-Malay bungalow, the property changed hands several times before it was pulled down in 1899 to make way for five brick shophouses, one of which belongs to Gooi today. A historical site, the shophouse was also once the possession of a famous Chinese towkay named Khoo Houn Yeang. He was the son of Khoo Thean Teik, a founding director of the Khoo Kongsi, who was one of the most powerful Hokkien leaders of 19th-century Penang.

Considering its provenance, it made good sense to appoint passionate conservation architect Tan Yeow Wooi, a specialist of Southeast Asian Chinese houses, to oversee the restoration and renovation works. Also appointed was KL-based interior designer Raymond Lee, who had exposure to world-class international design and an innate ability to blend the contemporary with vintage and antique pieces. The two talents ensured that Gooi’s brief for the home — to combine the old with the new while respecting the home’s history and heritage — was met to the letter.

With a masterplan in place for four large bedrooms with en-suites, three have been completed under Tan and Lee’s watchful eyes and the overall result is an eye-pleasing celebration of classic Straits Eclectic style jazzed up by soothingly luxurious touches, including deep white bathtubs, modern-minimalist four-poster beds and designer furniture.

The house’s façade is an homage to the richness and depth of the Peranakan aesthetic with intricate decorations and the soft glow of traditional lanterns beckoning you to enter. For Gooi and his family, there is also the provision of enough space to park four cars — a godsend in gridlocked George Town. Adhering to traditional Straits Chinese shophouse design, the house is on the narrow side, at just 6.8m wide, but runs deep and long within, for at least 65m. Once inside, you can’t help but admire the beautiful original tiles of the main hall’s floor before you are drawn to the walls, which are adorned with contemporary works of art by Datuk Tang Hon Yin, an accomplished self-taught artist and former chairman of the Penang State Art Gallery.

The spaces at No 39 balance the past and present beautifully with the main hall and living area separated by a traditional screen, above which hangs an antique plaque that’s inscribed with well wishes in gold leaf calligraphy. “I want to respect the architecture of this heritage space,” points out Lee, “but I also know I didn’t want to create a museum-like environment. I wanted a home where its occupants could enjoy traditionally crafted spaces with all the modern-day comforts.”

The sofas and chairs — a mishmash of modern and traditional blackwood pieces — are matched with carefully selected cushions from Gudang while intricate tribal rugs from Nasim Carpets add much-needed pops of colour. And considering the home’s location in the heart of Unesco-listed George Town, the requisite Peranakan decorative touches are, assuredly, evident: in strategically placed bakul sia (auspicious Nyonya baskets) and a 19th-century buyong (water urn) in the courtyard, above which is a modern retractable skylight — a thoughtful and practical touch, perfect for when monsoon rains hit or should the Penang sun prove too searing. Lee also made sure to incorporate pieces from Gooi’s vast collection of antiques and Straits Chinese paraphernalia wherever possible.

The dining space is dominated by a massive Tok Panjang that seats 26 (tok in Hokkien means “table” and panjang is Malay for “long”), providing the perfect setting for the legendary feasts associated with the fun and food-loving Baba-Nyonya. At the end is a slightly sweeping staircase that leads to the first level, where the bedrooms, each with en-suite facilities crafted from grey and white marble, are located. “We commissioned the four-poster beds to be made from solid nyatoh wood,” says Lee. “And I wanted to maintain a white, fresh and crisp feeling for the bedrooms as I love how they are all flooded with natural light.” And although it was the lively vibe of Kimberley Street, all colour and cacophony, that initially attracted Gooi’s attention, it is perhaps the peace and tranquillity of this modern home — which perfectly balances the island’s past with its present — that pleases him the most right now.