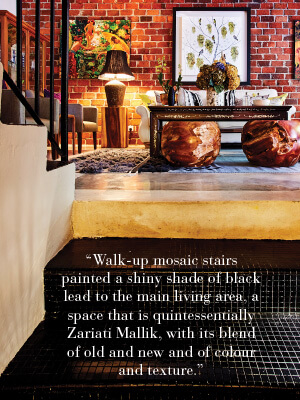 Fusing colour, texture and a variety of elements is Zariati’s forte 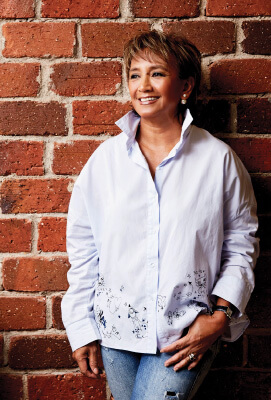 “The dining area and kitchen are separated by a magnificent bar counter made out of a single piece of asam wood, which took the combined strength of eight men to haul into the house.”

Framed works of art abound all around the guest house 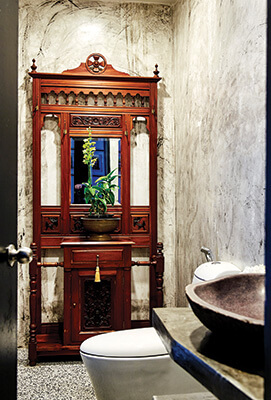 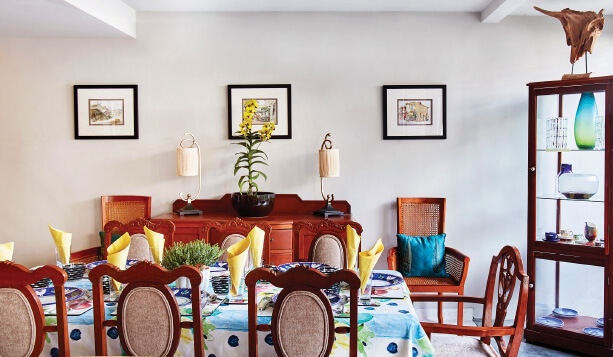 Surrounded by lush greenery, this charming guest house in an Ampang cul-de-sac is a stunning example of how mixing old-world treasures with design-conscious buys can result in a living style that is edgy yet elegant

For interior designer Zariati Mallik, crafting sophisticated interiors is a given; after all, it’s her passion, her forte. Zariati, who studied interior design in London, has made a name for herself in Kuala Lumpur as an interiors alchemist, for being able to cannily fuse the old world with the new while seamlessly blending ethnic touches with modernity. Nowhere is this more apparent than in her living spaces.

We visited her new guest house one afternoon, located within a cul-de-sac in a steep, hilly part of Ukay Heights, Ampang. Surrounded by Seventies-style bungalows and terraced houses, it is a charming neighbourhood, although, Zariati warns, monkeys are a menace there. “They can be a nuisance but I still like it here very much. I love the surrounding greenery and even though my patch of garden is mostly rocky and spare, it attracts birds and butterflies, both of which I love.” Slender leopard trees (also referred to as caesalpinia ferrea and instantly recognisable by their peeling bark) provide much-needed shade from the tropical heat and pots of bird’s nest ferns and little urns holding colourful guppies punctuate the raw but lovely garden. “It’s ideal for the tropics,” says Zariati. “I planted the creeper myself and it’s taking such a long time to cover the wall. The garden was once entirely covered by grass but, as the caesalpinias grew taller and started blocking out the sunlight, it became patchy in parts. I can’t stand anything imperfect so I ripped out all the grass and replaced it with rocks and pebbles instead.”

With her main family home just down the road, Zariati decided to purchase this extra unit because she wanted more space; in part to accommodate a little office, out of which she and her team could work, tending to a portfolio that includes some of Kuala Lumpur’s wealthiest and most titled names, as well as to create a secondary home where her sons could entertain and house their friends who visited often from Australia. “I lived just down the street and had my eye on this place for some time,” she says. “It was vacant for a year and when I purchased it, it was really dilapidated!”

A split-unit spanning 2,500 sq ft and dating back to the 1970s, it was clear a lot of refurbishment work was needed but “little change to the structure as the old property developers knew how to create solid homes”, adds Zariati. She took the liberty of adding an extra room at the kitchen level to the originally four-bedroom, three-bathroom house, although she concedes that “it has been turned into a storeroom now”.

The lowest level of the house is where the kitchen and dining area are located, with a backyard where pot upon pot of Zariati’s fragrant herbs thrive. There’s mint, rosemary and lemon thyme as well as a bakawali — a flower that only blooms at night and for just a few hours, lending credence to the mythical belief that when it does, it is in the presence of bunian or nymphs. The dining area and kitchen are separated by a magnificent bar counter made out of a single piece of asam wood, which took the combined strength of eight men to haul into the house. Retro-looking kitchen lamps from the 1960s hang overhead, which Zariati proudly says she’d rescued from a client who wanted to discard them. Little bursts of colour come courtesy of a classic, bright orange Dualit toaster and framed watercolour prints of Penang street scenes by Ngo Teong Beng. Zariati’s cabinets and shelves are lined with treasures, from antique Wedgwood (sourced from bazaars in Australia) to an old blancmange mould gifted to her by her friend, Wong Mei Wan, whose name local collectors would immediately link to the now-defunct art gallery, GaleriWan.

Walk-up mosaic stairs painted a shiny shade of black lead to the main living area, a space that is quintessentially Zariati Mallik, with its blend of old and new and of colour and texture. Art hangs from every available wall space (“My husband warned me that if I came back with yet another painting, he’d hang it around my neck,” she chortles) and ranges from pieces inspired by the works of Adrien-Jean Le Mayeur (“Bought from Purser’s Choice in Bangsar, although I’d love nothing more than an original,” she laughs) to a Kassim Abbas painting of black-necked cranes. Guests entering the home, meanwhile, would be greeted by an original Raja Azhar Idris work of a court musician playing a Kelantanese serunai. Nearby, more antique Malaccan armoires hold her trove of beautiful Kosta Boda glassware while an antique kilim rug, picked up at an auction at what used to be the old Hilton hotel in Jalan Sultan Ismail, looks perfectly in sync with a particularly marvellous carpet by the celebrated Spanish label, Gan Rugs (short for Gandiablasco), which she’d purchased from Linds Furniture in Bangsar.

Zariati’s talent and eye for transforming spaces could perhaps be traced back to her London days as well as her years of living in New York’s glamorous Upper East Side, when her banker husband was seconded there. “I love doing up houses, to be able to see the ‘before’ and ‘after’ and I knew I wanted a glamorous yet industrial feel for this space while being able to use it to house my collection of things, from paintings to antiques and furniture. Besides, I always tell my clients that a home doesn’t have to be all matchy-matchy. Play with colour and put fresh-cut flowers and pots of orchids around the house. You can have very simple furniture but use elements like beautiful cushions to make the space pop!” Looking around at her beautifully crafted space, it certainly sounds like good advice to us.