Lipper Fund Awards from Refinitiv: On the road to recovery 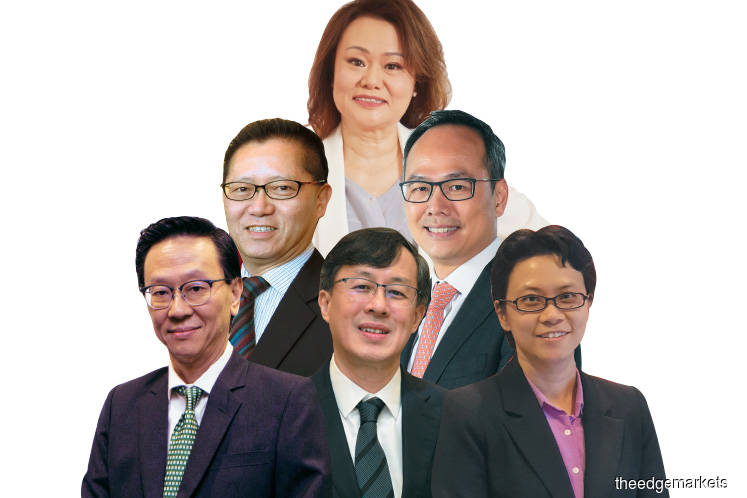 After a tumultuous 2018, local fund managers are relieved that the headwinds that impacted the financial markets are beginning to settle. Despite the slower-than-expected global growth and uncertainties due to geopolitical tensions, the outlook for 2019 is turning out to be much brighter, they tell Personal Wealth.

For one, many events last year that caused uncertainty among investors have created some sweet spots. Asian equities and bonds are starting to look attractive following the sell-off in emerging markets.

“Last year started on a wave of optimism over prospects of a synchronised global growth. Instead, it turned out to be one of divergent trends and increased geopolitical and economic uncertainty, which weighed heavily on financial markets,” says Jason Chong, CEO of Manulife Asset Management Services Bhd.

“We believe that the many economic difficulties experienced last year are likely to be less problematic in 2019. The gradual progress in trade negotiations between China and the US is a hopeful sign.”

The ongoing US-China trade tensions have dominated headlines over the past year, setting off a chain reaction in financial markets across the world. The World Bank predicts that global economic growth is expected to slow down a notch to 2.9% this year from 3% last year.

However, as the US and China have shown that they are willing to negotiate to ease trade tensions, the difficulties experienced last year are less likely to exert serious downward pressure on stock markets, says Chong.

Apart from the trade tiff, the world’s interest in Brexit has waned considerably as the UK’s negotiations with the EU drag on. Without a firm exit plan, it is anticipated that the UK will be the one to bear the brunt of the fallout.

While the negative effects of the trade tensions and other geopolitical events have not entirely passed and could still impact export-reliant Malaysia,  a number of favourable factors are expected to cushion the blows on the local equity and bond markets going forward, he says. “We are seeing fewer political events on a global level that could negatively impact the local market. The US Federal Reserve’s interest rate hike [pause] is certainly a welcome move.

“Regionally and domestically, equity valuations have become more favourable as they are now below their historical mean and slightly above previous recession levels. We do not expect a meltdown like in the past, given the stronger fundamentals and enhanced quality of companies.

“In addition, markets tend to react positively over the long term to newly elected leaders and we expect the same for Malaysia if the new government continues to deliver on its promises.”

From an equities perspective, Chong expects Malaysia to reap the benefits of certain global and domestic political actions. This could be a longer-term play as the country is increasingly being touted as an alternative base for US firms looking to move their supply chain away from China.

“Domestically, the government’s planned restructuring of certain industries, such as the automotive, power, property, telecommunications, gaming, alcohol and tobacco sectors, coupled with its move towards Industry 4.0, could bring about interesting opportunities in these sectors,” says Chong.

Regional equities to make a comeback

Public Mutual Bhd CEO Yeoh Kim Hong echoes Chong’s sentiment on equity markets. She says the markets are expected to perform better after the synchronised downturn last year. Most of them have already recovered from the severe battering they received, she points out.

After previously spooking markets, the Fed decided to soften its approach to interest rates last month. The US central bank announced that the key interest rate was expected to hover near 2.4% until end-2019. This was three months after it said two hikes could be expected this year. The key interest rate is expected to reach 2.6% in 2020 and remain at that level until 2021, unless economic conditions in the US change significantly.

“The Fed’s rate hikes in 2018 caused the US dollar to strengthen against regional currencies and foreign funds to withdraw from developing markets, which caused stock markets across the region to decline. However, with the recent change in its stance on interest rates, developing markets could see a return of fund flows, currency strength and upward rerating of valuations,” says Yeoh.

“As we could be near the end of the tightening interest rate upcycle in the US, the pressure on developing-market currencies is easing. This should result in better performances developing-market equities and bonds.”

Yeoh says the valuations of US stocks are no longer as excessive and offer a dividend yield of about 2%. “There is room for positive rerating for regional markets such as China and Taiwan, which are currently trading at discounts of 9% and 6% to their historical long-term average price-earnings ratios, with dividend yields of about 4% respectively.”

Hong Leong Asset Management Bhd CEO Hoo See Kheng too expects Asian equity markets to outperform, given that valuations have become cheap following last year’s sell-off. “Although growth is expected to be slower than last year’s, we expect corporate earnings growth in Asia to outpace that of developed markets.

“In Asean, we favour Malaysia as most of the other countries [such as Indonesia, Thailand and the Philippines] are expected to hold their general elections this year and the political uncertainty may be an overhang on these markets, whereas Malaysia emerged from its own general election last year.”

But the wave of optimism is not an indication that the global markets are out of the woods. Affin Hwang Asset Management Bhd deputy managing director and chief investment officer David Ng sees two risks that the market seems to be complacent about.

The second risk is taking for granted that the US central bank will not raise interest rates this year. Ng reminds investors that although the Fed is holding back on rate hikes for the time being, the world’s largest economy is doing well and its inflation rate could go up.

“The market is now pricing in a pause in rate hikes for the rest of 2019. In our view, the US economy remains healthy and inflation could gradually rise. Thus, there is a fair chance that the Fed may resume rate hikes in the second half of this year. This may surprise the market and lead to pullbacks in the bond and equity markets,” he says.

On the home front, economic growth is projected to be 4.5% in 2019 amid sustained domestic demand.

Yeoh says that after the net outflow of RM11.6 billion from Bursa Malaysia last year, selling pressure from foreign investors is expected to ease. Thus, the local stock market may be positioned to trend higher if foreign markets continue to strengthen.

“Valuations of [stocks on Bursa] are slightly higher than their 10-year average, with an average dividend yield of about 3.4%, which should underpin the market amid a stable interest rate outlook,” she says.

The ringgit, which depreciated 2.1% to 4.13 against the US dollar last year, has improved to 4.08. Yeoh believes that the local currency will continue to be supported Malaysia’s current account surplus, the recovery in crude oil prices and return of foreign investments. “Following the ringgit’s recovery, investors have taken profit on export-oriented counters, which previously benefited from a weaker ringgit,” she says.

But there is renewed interest in sectors that were impacted the weak local currency such as the automotive industry, says Yeoh. The government’s initiative to boost the local currency and the economy is expected to improve credit ratings and lead to a firmer ringgit, she adds.

TA Investment Management Bhd CEO Wong Mien says the ringgit is bound to recover over the medium term. “As the new government is trying hard to restore the fiscal health of the country, we believe the ringgit could strengthen in the medium term. As the administration  is trying to reduce the budget deficit and start paying off its debts, we believe foreign investors will return to Malaysia.”

Domestic growth is still vulnerable to external factors such as crude oil prices, a strengthening US dollar, US interest rates and other geopolitical issues, says Choong.

Given the current market conditions, Affin Hwang’s Ng warns investors of more turbulence ahead. “Reassess your risk profile and take the current market rebound to rethink your asset allocation. For example, if you find that you have too much exposure to equities when your risk tolerance is low or modest, it is prudent to reallocate a certain portion to lower-risk asset classes such as a bond or dividend fund. Stick to an asset allocation that matches your risk tolerance and stay diversified.”

Local bonds are looking attractive as Bank Negara Malaysia appears to be holding back on raising interest rates for now. This comes as the US Federal Reserve signals that it is done with rate hikes for now, which gives other central banks the flexibility to pause their rate increases or ease policy rates.

In the light of this, fund managers believe that Malaysian bonds are expected to do well as Bank Negara is under no compulsion to adjust its overnight policy rate (OPR). Libra Invest Bhd fund manager Joy-Marina Choong Wai Kwin says headline inflation is expected to stay low in the immediate term and remain broadly stable compared with last year.

Given the expectations of moderate domestic growth amid benign inflation, there is no urgency for the central bank to raise interest rates in the near term. This is conducive for bond investments, says Choong. “We will continue to actively manage our fixed-income funds while maintaining focus on liquid, high-grade bond issuers with strong credit and stable long-term cash flow.”

She recommends that investors look at Malaysian bond funds as domestic growth and inflation are expected to remain moderate. “The slower pace of new primary issuances in the local corporate bond market, especially in the AAA and AA-rated space, may continue to drive yields lower [and prices higher]. While financial markets may experience fluctuations from time to time, we always advocate that investors take a long-term approach towards their investments.

“For the local bond market, given the challenging economic landscape, we continue to be overweight on sectors that are resilient to economic cycles — for example, the power sector. [This is mainly] due to its long-term, stable and predictable cash flow, the steady demand for electricity and the strong credit profile of the electricity off-taker — in this case, Tenaga Nasional Bhd.”

Manulife Asset Management Services Bhd CEO Jason Chong believes that the risk-reward ratios in the local bond market are quite balanced in the medium term and corporate bonds could be the key driver of returns for fixed-income investors. “The Malaysian bond market is well supported ample domestic liquidity and real money demand. Coupled with expectations of more subdued economic growth and a benign inflation outlook, the OPR could remain unchanged in the early part of this year. We believe this presents an environment that is conducive for investing in bonds,” he says.

However, the outlook for Malaysia’s long-term fiscal health remains a concern. The new government’s targets for the country’s fiscal deficit imply that there will be a longer timeline for fiscal consolidation efforts.

This affects investor sentiment, says Chong. “In addition, potentially higher net supply of government bonds in the first half of this year may pose a slight drag to the market [although this could ease in the second half of the year as bond maturity increases]. On top of that, Malaysia’s higher reliance on oil-related revenue increases its vulnerability to global oil price movements, which could hinder the local bond market.

“Against this backdrop, we see the market environment as neutral. We believe corporate bonds will remain an attractive asset class that offers higher returns with lower volatility. We expect credit spreads to remain tight as investors continue to chase yields amid the smaller supply of corporate bonds this year.”