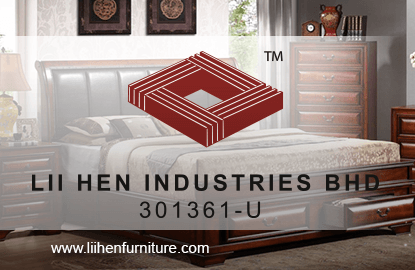 According to the filing with Bursa Malaysia today, Lii Hen (fundamental: 2.8; valuation: 2.4) said the proposed corporate exercise was to reward the shareholders.

The share split is meant to increase the number of shares of Lii Hen held by shareholders while maintaining their percentage of equity shareholding.

It added the corporate exercise also can improve liquidity and marketability of the Lii Hen shares.

"The entitlement date for the bonus issue and the share split shall be determined and announced by the board at a later date," the furniture manufacturer said.

The group noted its paid-up share capital will expand to RM90 million from RM60 million currently.

On the proposed share split, Lii Hen said it will be undertaken after the bonus issue.

"For clarity, in the event the proposed share split is implemented, the bonus issue will be undertaken concurrent with the share split. Hence, under the said scenario, the bonus shares to be issued and listed shall be in the form of the subdivided shares," it added.

The group said its share base will swell to 180 million shares from 90 million upon the completion of the share split.

"No suspension will be imposed on the trading of Lii Hen shares on Bursa to facilitate the implementation of the share split," it stated.

Lii Hen has appointed KAF Investment as the principal adviser for the proposals.

Barring any unforeseen circumstances, the group expects the proposals to be completed by the third quarter of 2015.

Over the past one year, Lii Hen shares have been on an uptrend. The stock has climbed from a low of RM2.85 in September last year and to RM4.85 today.