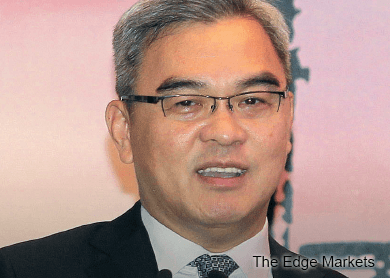 KUALA LUMPUR: Former group president and chief executive officer (CEO) of S P Setia Bhd, Tan Sri Liew Kee Sin, has been redesignated as the non-executive chairman of Eco World Development Group Bhd, which did not come as a surprise to many as Liew has been said to be the driving force behind the property development group.

At the conclusion of its 41st annual general meeting (AGM) yesterday, Eco World (fundamental: 0.95; valuation: 0.3) announced that Liew, currently a director of the group, will be filling in the spot of its present chairman Tan Sri Abdul Rashid Abdul Manaf, who will remain on the board as the founder, as well as a non-independent and non-executive director of the group.

Liew is also the chairman of Battersea Project Holding Co Ltd, which was set up to undertake the redevelopment of the Battersea Power Station in the United Kingdom.

All appointments will be effective from today.

Meanwhile, Eco World president and CEO Datuk Chang Khim Wah told reporters after the AGM that Liew’s position in Battersea would not give rise to any conflict of interest in his new role.

“Liew’s role as chairman [in Eco World] is a non-executive one, and Eco World’s developments are in Malaysia while Battersea is concentrated in the UK, so there is no conflict of interest,” he said.

On the listing of Liew’s special purpose acquisition company (Spac) Eco World International Bhd, Chang said the group is working closely with the relevant authorities on the matter.

“We will wait for the decision from the Securities Commission on it (the Spac listing),” he said.

Eco World has previously said that it continued to see strong sales from its ongoing projects in the Klang Valley and Iskandar Malaysia.

As at Feb 28 this year, the group’s year-to-date sales amounted to RM621.1 million, with RM290.5 million contributed by projects in the Klang Valley and RM330.6 million from Iskandar Malaysia projects.

On the outlook for the property sector, Chang said it is unlikely that property prices will come down.

“Raw material prices are holding at current levels, and land prices are still the same, if not getting more expensive, especially near the populated areas. There is also the factor of rising labour costs. Putting all these components together, it is unlikely that prices will come down. With regard to the GST (goods and services tax), it is business as usual for us as 80% of our launches are residential properties which are GST-exempt,” said Chang.

However, he added that the group is confident of reaching its RM7 billion sales target for FY15 and FY16 despite the challenges.

For its first quarter ended Jan 31, 2015 (1QFY15), Eco World posted a net profit of RM3.06 million or 0.6 sen per share and a revenue of RM158.03 million, primarily due to contributions from Eco Majestic and Eco Sky in the Klang Valley, and Eco Botanic and Eco Business Park 1 in Iskandar Malaysia.

Looking ahead, the group intends to launch four new projects in the upcoming months of its current financial year — Eco Sanctuary in Shah Alam, Eco Terraces in Penang, and Eco Tropics and Eco Business Park III in Iskandar Malaysia.

Eco World shares closed up five sen, or 2.59%, yesterday to RM1.98, giving it a market capitalisation of RM3.81 billion.