BY THE LOOK of things, Tan Sri Liew Kee Sin, the former chief executive of S P Setia Bhd, may have to relinquish the chairmanship of Battersea Project Holding Co Ltd (BPHCL) before his contract ends in September. This is because the property tycoon is involved in a personal endeavour in London — the development of property projects worth £2.2 billion (RM11.8 billion) — which may give rise to conflicts of interest. 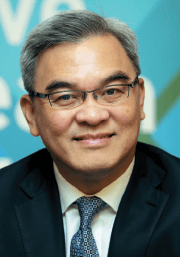 EW Investment was incorporated in Jersey, Channel Islands, in November last year with Liew holding a 70% stake and Voon 30%. The latter was the chief operating officer of S P Setia during Liew’s tenure as its president and CEO.

To recap, BPHCL was set up to undertake the redevelopment of the iconic Battersea Power Station by S P Setia (fundamental: 1.4; valuation: 1.2), Sime Darby Properties Sdn Bhd (SD Prop) and the Employees Provident Fund (EPF). S P Setia and SD Prop own a 40% stake each in BPHCL while the EPF owns 20%.

“Now that Liew is launching his own projects in London, there are bound to be conflicts of interest if he continues to hold the chairmanship of the Battersea project. While his tenure will end in September, he might have to leave sooner ... maybe as early as in the first quarter,” says an industry source.

Analysts, however, point out that it is up to BPHCL’s board to decide whether or not to retain the tycoon as the chairman. “I’m sure the board is aware of his involvement in property development there,” says an analyst with a local investment bank.

Liew had set up EWI after his appointment as non-executive director of Eco World Development Group Bhd (fundamental: 0.3; valuation: 0.95), which was to eventually acquire a 30% stake in the SPAC.

In view of the proposed listing of EWI on Bursa Malaysia, EW Investment is prepared to offer the SPAC a right of first refusal to acquire its 75% stake in EcoWorld-Ballymore, says Liew in a statement on the investment.

This means EWI might be the first property-related SPAC on the local stock exchange. It will help raise fresh capital for Liew to execute his projects in London while Eco World will concentrate on the domestic market.

While EWI is still awaiting approval for its listing from the regulator, the announcement of the multibillion-ringgit projects by EW Investment has got the market talking about its potential.

This is because unlike the other SPACs on Bursa Malaysia, EWI will already have a substantial asset base. The other SPACs have typically taken between six months and a year post-listing to make a qualifying acquisition.

In other words, investors will know what they are buying into in the case of EWI.

EcoWorld-Ballymore will acquire three sites in Central London for a total of £428.7 million to develop Arrowhead Quay in Canary Wharf, London City Island Phase 2 on the Leamouth Peninsula and Embassy Gardens Phase 2 in Nine Elms.

“The projects, which are situated in geographically diversified growth areas offering differentiated pricing points, present an unrivalled opportunity for EcoWorld to introduce its brand name to the Greater London market.

“With our combined and complementary strengths, we believe that the partnership with Ballymore Group can become a strong platform to grow our presence in the UK property market,” says Liew in the statement.

Ballymore Group is a property investment and development firm with over 30 years’ experience in the UK and Ireland property markets.