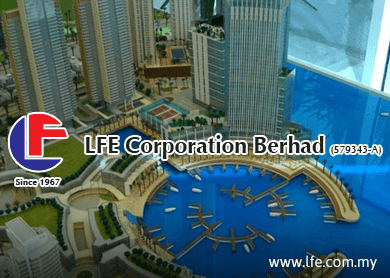 KUALA LUMPUR (May 8): LFE Corp Bhd (LFE Corp) emerged as Bursa Malaysia’s top gainer by percentage in morning trade as investors react to the company’s announcement last night that its regularisation plan has been approved by regulators.

At 11.45am, LFE Corp’s share price soared to its intra-morning high of 26.5 sen, representing a 43% or 8 sen hike from yesterday’s closing price. Over about 12.6 million shares changed hands at that point in time.

The requirements was triggered based on the group’s quarterly report for the period ended July 31, 2012 where its shareholders’ equity is less than 25% of the group’s issued and paid-up capital.

Yesterday, LFE Corp announced that its regularisation plan to lift it out of PN17 status has been approved by Bursa Malaysia.

Based on a filing with Bursa Malaysia, LFE Corp said that the regulator has approved the listing of up to 42.45 million LFE under the proposed rights issue.

LFE Corp featured as The Edge Research’s stocks with momentum on April 8, 2015. It said, “LFE Corp was ‘red flagged’ by the system suggesting that investors should exercise caution while trading given its low fundamental score. It has gearing of 109%.”

LFE is primarily a mechanical and electrical engineering services firm. It is also involved in provision of intelligent transportation systems solutions and distribution of computer products.