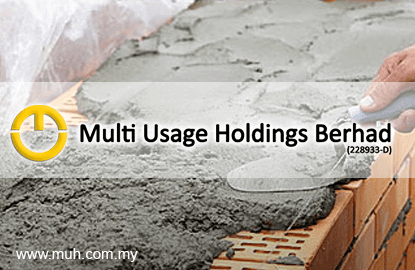 KUALA LUMPUR: Building materials manufacturer and property developer Multi-Usage Holdings Bhd has received a court summons, filed by a group of 11 individuals, including five of the company's 30 biggest shareholders, to annul an annual general meeting (AGM) held on Monday.

Under the summons, the plaintiffs are also seeking that all resolutions approved in the AGM be cancelled immediately, and to hold a fresh AGM within 30 days from the date of the court order.

The company said that the summons also seeks an order that all resolutions as proposed by the plaintiffs in the written requisition dated April 27 be tabled in the fresh AGM, and that an order for compensation and other relief deemed fit and proper by the court be paid by the current directors to the plaintiffs.

"The court has fixed July 28 to hear the application of the plaintiffs. The board of directors of Multi-Usage will seek legal opinion on this matter," the company said, adding that further announcements to Bursa on any material developments of the matter will be made in due course.

The AGM on Monday saw shareholders vote against the re-election of three directors, including independent non-executive chairman Abdul Aziz Mat.

Multi-Usage’s shareholders also voted against the payment of directors’ fees amounting to RM119,250.

Only one resolution was passed in the AGM, which was the reappointment of Messrs Deloitte as its external auditors.

As at May 7, Kim Cheng was the single largest individual shareholder of Multi-Usage, with a 31.51% stake, followed by executive director Tan Chew Hua and Topazvest Temasek Sdn Bhd, owning 29.08% and 29.07% respectively.

In December, an extraordinary general meeting (EGM) was called by a group of individuals led by Multi-Usage shareholder Tan Seik Lang to remove the entire board except for Chew Hua.

However, the EGM was not convened because Kim Cheng and the other four directors, who were about to be removed, had filed a summons in the Penang High Court, claiming that the proposed EGM was not bona fide, illegal, invalid and in breach of the Companies Act 1965. The suit is scheduled for full trial on Aug 17 and 18.

In the suit, Kim Cheng and the other four directors alleged that Seik Lang and the parties acting in concert had wanted to gain control of Multi-Usage through the EGM, instead of making a mandatory general offer.

On Dec 18, a day before the said EGM, Multi-Usage announced that there was an injunction order restraining Seik Lang and the parties acting in concert from holding the meeting.

Multi-Usage shares fell seven sen or 5.34% to close at RM1.24 yesterday, with a market capitalisation of RM73.91 million.