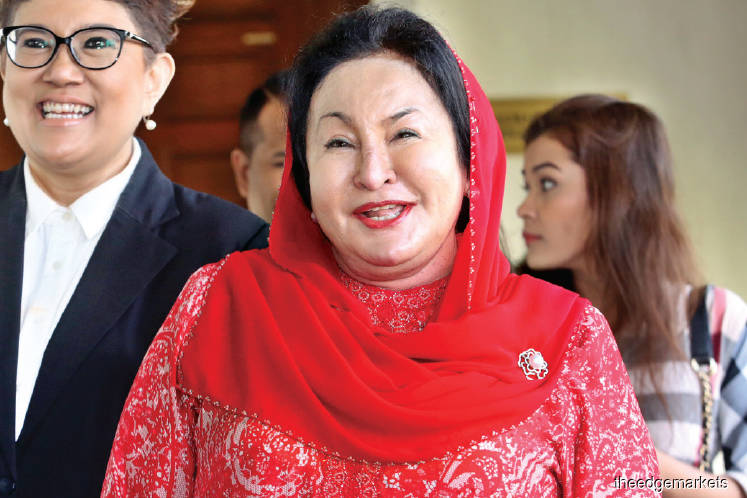 KUALA LUMPUR (Oct 16): The trial involving Lebanese jeweller Global Royalty SAL's US$14.79 million (RM60 million) suit against Datin Seri Rosmah Mansor, which was scheduled to begin on Tuesday (Oct 22), is in limbo as the High Court will only decide on that day if the matter will proceed.

The stay was filed by Rosmah's lawyers — Rajivan Nambiar and Mohd Reza Rahim — on Oct 11 after the government filed an appeal against the High Court's decision last month to allow the appointment of an independent jeweller to identify 44 pieces of jewellery. The government, however, did not apply for a stay of the trial.

However, Global Royalty's lawyer Datuk David Gurupatham objected the stay, saying that their case was only to recover the 44 pieces of jewellery. He added that he has to seek further instructions from his client Samir Halimeh to file an affidavit to object the stay as the hearing of Global Royalty's suit is already scheduled.

As a result, Gurupatham and Rajivan said Justice Wong Chee Lin will hear Rosmah's stay application on Tuesday morning, and make a decision on the application then.

If the court rules that the trial should proceed, it will start in the afternoon.

The hearing of Global Royalty's suit has been fixed for three days from Oct 22-24.

Gurupatham said they would have three witnesses, including the Lebanese jeweller Samir.

To complicate matters, the government in its forfeiture suit filed by the police commercial crime unit had named a company called OBYU Holdings Sdn Bhd — and not Rosmah — as the owner of the condo unit containing approximately 12,000 pieces of jewellery that were seized in May last year.

Hence, Rajivan said questions have been raised on whether Rosmah should have been named in the suit in the first place, and pointed out that Global Royalty should have intervened in the forfeiture claim involving OBYU Holdings to recover its jewellery.

Meanwhile, Gurupatham said his client Samir had identified four out of the pieces jewellery seized by the police that may include the 44 pieces sent by Global Royalty to Rosmah in February last year.

"This is based on the pictures shown to my client," the lawyer said.

He also said the firm had filed to intervene in the forfeiture suit against OBYU Holdings and Rosmah.

"Nevertheless what we are claiming is the return of the 44 items or the RM60 million payment for those items," he added.

Complicating the case further, Rajivan and Reza said while Samir claimed to have identified four pieces of jewellery, police investigating officer Deputy Superintendent Foo Yee Min said in his affidavit that he could only identify one of the items.

"Hence, it is beyond comprehension why the government filed the appeal over the court's ruling for an independent appointed jeweller hired by the court to verify all these items. As the government did not file for a stay, we are forced to apply for a stay of the trial as it is affecting our client," they said.

Global Royalty filed the suit on June 26 last year, demanding Rosmah return the 44 pieces of jewellery sent to her for her viewing or pay the total costs for them.

The jeweller claimed that on Feb 10 last year, it sent 44 pieces of jewellery, including a diamond necklace, earrings, rings, bracelets and a tiara, each worth between US$124,000 and US$925,000, to Rosmah by hand, through two of its agents.

The firm alleged that Rosmah had, in a letter dated May 22 last year, confirmed and acknowledged receiving the items, but said the items were no longer in her custody as they had been seized by the Malaysian authorities.