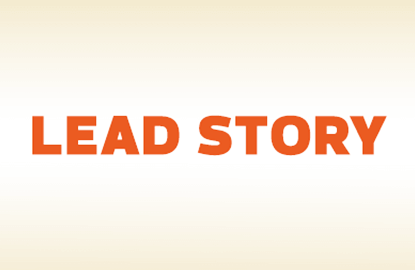 This article first appeared in Capital, The Edge Malaysia Weekly, on March 28 - April 3, 2016. 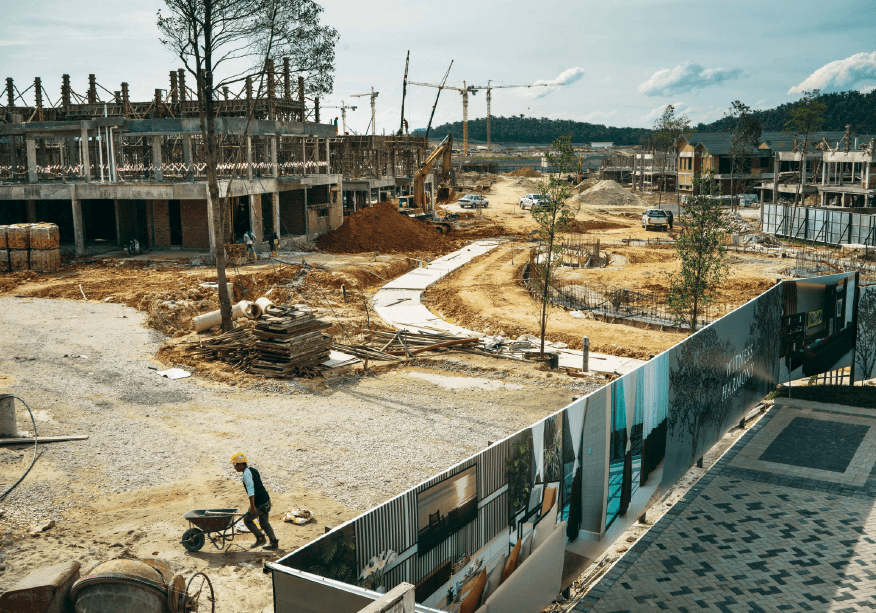 THE aggregate earnings of all listed companies in Malaysia fell by a significant 24% year on year to RM19.5 billion in the fourth quarter of last year (4Q2015), based on data compiled by Bloomberg (see Chart 1).

Following the uninspiring results, analysts have largely lowered their earnings growth expectations for this year. Maybank IB Research, for instance, has trimmed its forecast from 7.5% to 5.1% while CIMB Research’s was trimmed from 7.5% to 5.7%.

For the full year, total corporate earnings fell 10.8% y-o-y to RM87 billion, dragged down by lower earnings registered by banks and conglomerates as well as those in the power generation, plantation and shipping sectors. Half of the largest sectors reported a decline in earnings, from 8% for banks to 24% for plantation companies (see Table 1).

It is noteworthy that banks, the largest contributor (over a quarter) to total earnings on Bursa Malaysia, reported y-o-y contractions throughout the year.

The earnings momentum of property developers slowed in the first three quarters of last year and started to contract in the last quarter. For the full year, earnings were up 6.1%, driven by progressive milestone completions of unbilled sales.

For power, chemical and gas, their performance was determined by the dominant companies in the respective sectors, namely Tenaga Nasional Bhd, Petronas Chemicals Group Bhd and Petronas Gas Bhd. The FY2015 earnings of both TNB and Petronas Gas were negatively affected by foreign exchange losses on loans denominated in foreign currency, while Petronas Chemicals’ better earnings were attributed to a higher plant utilisation rate and favourable exchange rates as it is a net beneficiary of a strong US dollar.

Similarly, 4Q2015 was a challenging quarter for the telecommunications players as competition intensified, with the upcoming incremental spectrum fees from the redistribution of the radio spectrum.

For real estate investment trusts (REITs), the sharp declines in 3Q2015 and 4Q2015 earnings were due to non-cash fair value gains from the revaluation of their investment properties in 2014. When measured in income available for distribution, total REIT earnings were relatively stable, with distributable income up 3.5% in 2015. 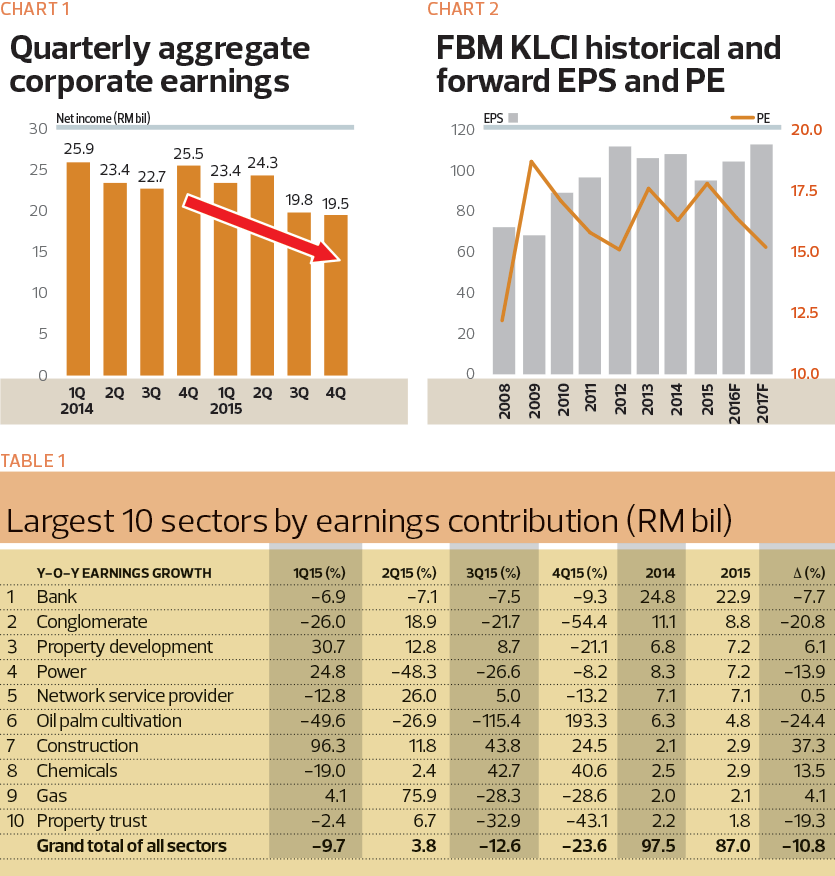 Things will get better … next year?

AllianceDBS Research head of Malaysia research Bernard Ching concurs, saying, “The challenging operating environment for both the banking and telecom sectors is the key contributor to 4Q2015 earnings cuts, which has more than negated the positive earnings revision for plantation counters.

Compared with the previous quarter, corporate earnings decreased by a much smaller quantum of 1.7%. Upon closer inspection, there were some good news for investors.

Construction was another big-cap sector that saw a positive earnings momentum.

Additionally, the aviation sector returned to the black in 4Q2015 due to stronger results posted by AirAsia and AirAsia X. Thanks to lower fuel costs, the airline operators said the lower all-in ticket prices have stimulated demand and boosted load factors and yields.

Other sectors that reversed their losses last year included trading and distribution, home and office products, refinery and retail (downstream activities of the oil and gas industry) and mobile virtual network operators (MVNOs).

Amid the overall disappointing 4Q2015 results, some sectors registered positive earnings growth during the year (see Table 2 on Page 39). It is worth noting that five of the 10 best-performing sectors in terms of earnings growth were exporters — wood-based and timber, electrical and electronics, insulation products, gloves and wood furniture.

The sharp decline in the ringgit last year and forex gains provided a huge boost to the bottom line of many exporters. Amid the weakening US dollar in 1Q2016, there have been some profit-taking activities in export-driven counters. But does this spell the end of the export theme?

Ching opines that the ringgit is unlikely to sustain its recent gain as it is highly correlated to crude oil prices, and Brent crude is expected to average at just US$35 to US$40 per barrel in 2016 due to the fundamental issue of oversupply. Thus, he remains confident about the export theme and views the recent selldown as an accumulation opportunity, particularly in exporters with resilient external demand.

Among the five domestic-oriented sectors, construction is the only big-cap sector in the top 10 list, posting consistent earnings growth throughout 2015. Analysts by and large are still bullish on the sector due to the upcoming major contract flows from transport-related infrastructure spending.

Wong expects 2Q2016 to see the start of the awarding of major infrastructure work packages, starting with the Pan Borneo Highway Sarawak and Klang Valley Mass Rapid Transit 2 projects. This will be followed by the Klang Valley LRT Line 3 and Gemas-Johor Baru double-tracking project in the second half of the year (2H2016). Also, there are remaining civil/infrastructure work packages under the West Coast Expressway and Refinery and Petrochemical Integrated Development (RAPID) project to be awarded this year. 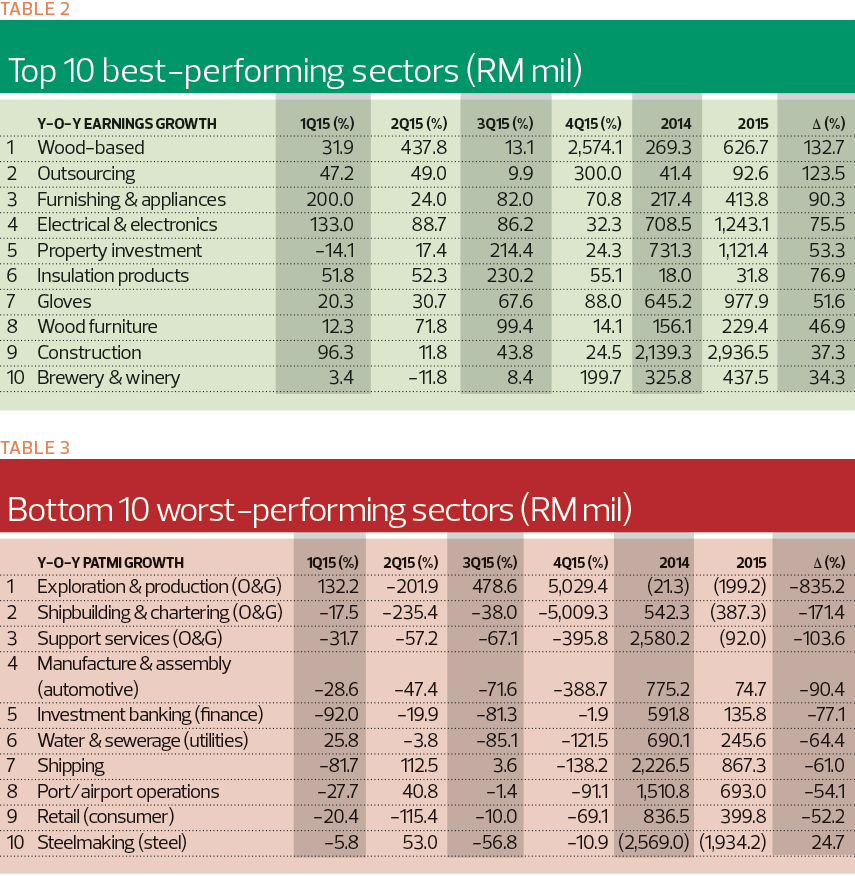 Even in bad times, there are still opportunities for value investors to bottom fish established companies that have been affected by the economic cycle. Not surprisingly, cyclical sectors such as upstream oil and gas, automotive and investment banking topped the list of the worst-performing sectors (see Table 3).

The consumer retail sector saw its earnings halved last year. Its growth was affected by the implementation of the Goods and Services Tax and softer consumer sentiment. Similarly, intensifying competition to maintain market share and higher import costs have weighed on the automotive sector’s earnings.

Thanks to talk of oil production cuts by the Organization of the Petroleum Exporting Countries, and increasing prospects of monetary policy easing, oil prices have staged a rebound to US$40.44 per barrel currently from their multi-year low of US$27.88 per barrel. Maybank IB Research believes that oil price volatility could offer multiple trading cycles, especially on high-beta, beaten down fundamental oil and gas stocks.

Another big-cap sector that is trading at historically low valuations is banks — the heavyweight sector that dragged down overall earnings in 2015. While the sector’s operating income generation has been holding up well, rising loan impairments remain a key concern, in addition to net interest margin compression and slower loan growth.

While there is no sign of fundamental improvement in trends, earnings in 2016 could be driven by lower expenses due to the mutual separation scheme undertaken by two banks. Ching is of the view that the banking sector is a dark horse but much depends on signs that its earnings downgrade cycle is finally over after kitchen-sinking exercises in 2015.

After massive foreign selldown of Malaysian equities in 2015, fund managers say foreign funds seem to be returning, to capitalise on the undervalued ringgit. However, Affin Hwang Research points out in a strategy report this month that much of these funds seem to have gone into the local bond market rather than the equities market.