Last to ground the Max a year ago, FAA’s global status shaken 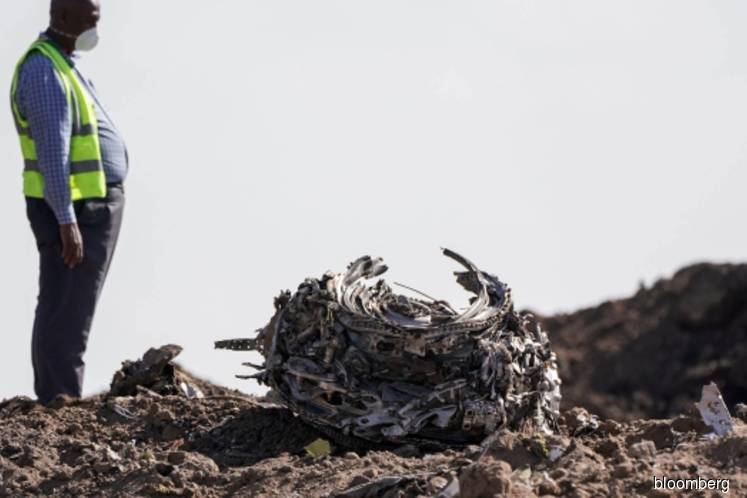 A recovery worker at scene of the Ethiopian Airlines Flight 302 crash on March 13, 2019. (Photo credit: Getty Images via Bloomberg)

LONDON/WASHINGTON (March 13):  After the second fatal crash of a Boeing Co. 737 Max jetliner, most of the world’s aviation regulators rushed to ground the jet while the U.S., where it was built, waited for data.

The U.S. Federal Aviation Administration took three days and ended up being the last to end flights on Boeing’s best-selling jetliner, a year ago Friday.

The delay, and subsequent revelations about what went wrong with oversight of the plane’s design and certification, raised questions about the judgment of an agency accustomed to international deference. The reverberations threaten to complicate the jet’s return to service and could portend long-term implications for the industry.

“What we’ve got now is a situation where the confidence, the straightforward acceptance of another regulator’s work, has been shaken,” said Dai Whittingham, a fellow at the U.K. Royal Aeronautical Society.

The 737 Max crashes prompted the longest grounding of a jetliner in decades, tarnished the aircraft manufacturing giant’s image, and caused financial stress for airlines around the world stuck with hundreds of planes that they still can’t fly.

Boeing projects it will take until midyear to get approval for the multiple fixes on the plane and the FAA is leading the process. But other regulators, such as the European Union Aviation Safety Agency, might conduct additional checks on future aircraft designed in the U.S., Whittingham said.

“They want to see it for themselves,” he said. “That’s a big step. It will add a layer of cost to the industry.”

Any tension among regulators has been kept mostly behind closed doors, but there have been exceptions. Canada’s transport minister said last year that Max pilots should receive additional training in flight simulators — something the FAA is still studying but expected to mandate soon.

Canadian officials have also insisted in contentious meetings with the FAA that pilots should be instructed to disable a key warning system to avoid distraction during an emergency. FAA experts think that would create additional risks.

For the most part, however, the leading agencies around the world appear to be working with their U.S. counterparts to return the plane to service at close to the same time, according to public statements and interviews with more than 10 current and former officials around the world.

“It will take the FAA — and Boeing — a while to restore that reputation, which may well change the attitude of other countries towards its leadership role,” said Barry Humphreys, an aviation consultant who formerly was a U.K. economic regulator and airline executive.

After the second crash, of an Ethiopian Airlines jet on March 10, 2019, the FAA issued a global notice of “continued airworthiness.” But in a stunning rebuke, nation after nation declared a halt to flights of the plane. They included Singapore, Australia, Malaysia, the U.K., France, Turkey, Germany, Italy, Ireland and the Netherlands, as well as the European Union’s aviation regulator.

In some cases, they prohibited the jetliner from even flying through their airspace.

The FAA reversed course March 13, after investigators found a piece of wreckage and obtained the first flight-track data showing similarities to the previous accident, off the coast of Indonesia the previous October.

“Boeing made the FAA look really bad in the world because historically the rest of the world relied on the FAA,” said consultant Adam Pilarski, former chief economist for McDonnell Douglas before it merged with Boeing.

The agency had delegated key assessments of the system on the plane that malfunctioned in the two crashes to Boeing employees, Pilarski said, a process that had been expanded by lawmakers.

“It turns out the FAA didn’t do a lot of the work,” he said. “They relied on Boeing. That can’t be recovered in my opinion.”

“Developing a transport category commercial aircraft that is compliant with FAA regulations but fundamentally flawed and unsafe highlights an aviation oversight system in desperate need of repair,” the committee wrote in a recent report.

David Calhoun took over as Boeing’s president and chief executive officer in January, amid a flurry of actions designed to improve relations with regulators and reset expectations for returning the plane to service.

Among his first actions was to call FAA Administrator Steve Dickson.

“Dave is working to rebuild trust with all of our stakeholders and the FAA is at the top of our list,” Boeing spokesman Gordon Johndroe said.

The FAA, in a statement, said the lessons learned from the two crashes would be “a springboard to an even greater level of safety.”

“While the FAA’s certification processes are well-established and have consistently produced safe aircraft designs, we are a learning agency and welcome the scrutiny,” the agency said in the statement. “We are confident that our openness to observations and recommendations will further bolster aviation safety worldwide.”

Like Boeing, the FAA changed leaders since the crashes. It is tightening oversight of the system that allows specially deputized employees of manufacturers such as Boeing to approve aircraft designs, Dickson, who took over the agency in August, told lawmakers Wednesday.

“The FAA’s ability to oversee the process currently has areas that need to be improved,” he said at a House hearing on the agency’s budget proposal.

The FAA hasn’t delegated any decisions to Boeing as it oversees fixes to the software system involved in the accidents.

The agency has also ordered several additional changes on the plane, including to its flight computers and wiring. In recent months, the FAA has proposed three large fines against Boeing and forbidden it from signing off on the safety of newly built planes.

“I think the FAA has internally said we have to be more assertive here,” said Randy Babbitt, who formerly led the agency.

Some cautioned that criticism of FAA’s reviews of the plane should be taken with a grain of salt in the emotional aftermath of the crashes. “The whole issue has become politicized,” said John Hansman, an aeronautics professor at the Massachusetts Institute of Technology.

In the 1960s and 1970s, the aircraft manufacturing industry was centred in the U.S. and the FAA was the leader in setting standards. But as other companies such as Airbus SE in Europe grew in stature, that also led to increased influence for the European Union Aviation Safety Agency, Hansman said.

There are only a handful of countries in the world with aircraft manufacturing industries and the governmental agencies to assess the safety of airliners.

EASA, based in Cologne, Germany, is taking a lead role in looking over the FAA’s shoulder at its work on the 737 Max during the past year. Canada and Brazil, which also produce airliners, are also working closely in the process.

Boeing needs oversight from regulators other than the FAA, Patrick Ky, the European agency’s executive director, told the Financial Times in December. EASA, he said, wouldn’t have made the same missteps as the U.S. agency.

But in that interview and others, Ky has added that EASA was working well with FAA and it expects to clear the plane for service on a similar time-line as the U.S. EASA didn’t respond to questions on the issue this week.

The United Arab Emirates’ General Civil Aviation Authority has become more involved in safety oversight related to the 737 Max, said a person familiar with that country’s regulators who asked not to be named.

The authority won’t allow the plane to return to service at Flydubai unless pilots receive special simulator training related to the failure in the two crashes, said the person, declining to specify other possible actions by the agency.

Such a demand is no longer contentious, however, since Boeing in January said it supports such training and the FAA is all but certain to order it, after a series of committees review training needs later this year.

Canada’s Minister of Transport Marc Garneau has been calling for simulator training since last April, initially putting him at odds with the FAA.

Canada is working with a multinational panel reviewing the Max’s training needs, the Joint Operations Evaluation Board, and with other agencies in “very much a collaborative approach,” said Amy Butcher, a spokeswoman for Garneau. But the country “doesn’t hesitate” to disagree, if its own experts say it’s necessary, Butcher said.

While FAA has taken some unusual public criticism, there are also signs that key nations have been reassured by the process.

China, which was one of the first nations to ground the Max after the Ethiopia crash, has recently reassured people that it intends to follow the FAA’s lead, said one industry official familiar with that country’s thinking who asked not to be named.

Some in the aviation world worry about what would happen were a significant split to emerge among regulators in different countries.

“It would bring our industry to a grinding halt,” David Curtis, chief executive officer of planemaker Viking Air Ltd., said Tuesday at a Parliamentary hearing in Ottawa.