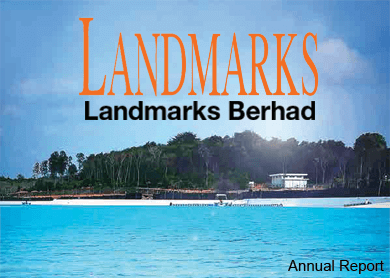 KUALA LUMPUR (Aug 12): Property developer and resort operator Landmarks Bhd has narrowed its net loss to RM3.77 million for second quarter ended June 30, 2015 against a net loss of RM7.03 a year ago.

Quarterly revenue, however, dropped slightly by 0.77% to RM11.59 million from RM11.68 million in 2QFY14, Landmarks said in a filing to the Bursa Malaysia today.

Landmarks operates The Andaman Hotel in Langkawi. It said that The Andaman has recorded an increase in revenue by RM1.6 million for the first six months of 2015 with the improvement in both average room rate and food and beverages revenue by 9% and 3% respectively.

For the six-month period, Landmarks said, the Resort and Destination Development division recorded operating loss of RM9.29 million compared to RM9.19 million in the corresponding period of 2014. The higher net loss was attributed mainly to the pre-operating expenses for Phase 1, Chill Cove, Treasure Bay Bintan, it added.

Moving forward, Landmarks expects the room rates and occupancy levels of The Andaman to grow in the coming year and contribute positively to the group.

Meanwhile, The Chill Cove and The Canopi have started receiving guests and the response has been positive. In May 2015, Treasure Bay Bintan, in a joint venture with Singapore-based Jouex Investments Pte Ltd, agreed to build, own and operate two hotels under international brands managed by the Accor Group, namely, Mercure and Ibis Budget.

“Both hotels are expected to open by end-2017. These, together with efforts by the office of the Chief Minister (Bupati) of Bintan to improve the marketing of Bintan as a tourism destination, bode well for the group and the Board is optimistic that Treasure Bay Bintan should begin to generate results for the group,” it added.