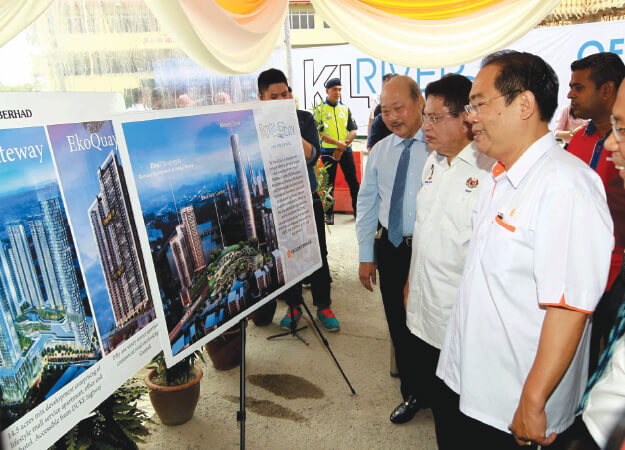 (From right) Keng Cheng, Tengku Adnan and Kang Hoo at the launch of the KLRC project by Tengku Adnan in Kuala Lumpur yesterday. Photo by Haris Hassan

KUALA LUMPUR: The government will trade land with Ekovest Bhd, controlled by tycoon Tan Sri Lim Kang Hoo, in return for rehabilitation works undertaken by the property developer on the first 2.2km of a 10km stretch of the Gombak river under the Kuala Lumpur River City (KLRC) project.

Under the deal, the government will give Ekovest 30 acres (12.14ha) of land within the KLRC development, said Ekovest managing director Datuk Seri Lim Keng Cheng.

He estimates the development on the land could potentially generate a gross development value (GDV) of over RM9 billion, which is 10 times higher than the cost of the land given to Ekovest.

Currently, Ekovest has several of its own property projects within the area, namely EkoTitiwangsa, EkoRiverCentre, EkoGateway, EkoQuay and EkoAvenue, whose combined land area is about 30 acres and with a total GDV of RM6.5 billion.

“All in all , the [proposed] site, together with our existing 30 acres of land also located within the KLRC development, will give us a total GDV of close to RM16 billion,” he told reporters after the launch of the KLRC project by Federal Territories Minister Datuk Seri Tengku Adnan Mansor yesterday.

In November last year, Ekovest bagged an RM157.25 million contract from the Kuala Lumpur City Hall to undertake improvement and beautification works in the city. The contract included the construction of an interceptor system and related works to improve the river water quality including the water treatment system along the Gombak and Klang rivers under the 110km River of Life project, which is a bigger development under the Economic Transformation Programme for Greater Kuala Lumpur spanning seven years.

Meanwhile, Ekovest’s KLRC project aims to rejuvenate and transform northern Kuala Lumpur into a world-class tourist destination. The project is positioned within Precinct 1 and 2 of the River of Life and is just a short drive from major city hubs such as Kuala Lumpur Sentral, Kuala Lumpur City Centre, The Golden Triangle, as well as the upcoming Tun Razak Exchange and Bandar Malaysia.

The 2.2km stretch forms the initial portion of the entire 10km KLRC development. It will see Ekovest undertaking construction works of the non-mechanical Gombak River Enhancement and Tunnel System (GREAT), which is expected to be completed in two-and-a-half years.

Keng Cheng said the GREAT system construction project will see the group investing RM950 million in development cost. It will finance the project through a combination of internal funds and bank borrowings.

“Typically for jobs like this, 20% to 30% will come from internal funds,” he explained.

As for the development of the remaining 8km stretch, he said it “depends on the government’s decision”.

“The 2.2km portion is a pilot project for people to buy in. Previously, purchasers will not buy properties near rivers due to [hygiene issues], which results in property values dropping. But with the [enhancements and transformation] of the properties’ vicinity, their values will appreciate,” said Keng Cheng.

With the implementation of the KLCR project, properties within the surrounding area covering almost 320 acres can “easily appreciate by 50%”, he added.

Keng Cheng said Ekovest’s order book now stands at RM12.5 billion, which will keep the group busy for the next four to five years. However, this does not include the KLRC project.

Its tender book is valued at about RM10 billion, which consists mainly of infrastructure projects tendered for this year and 2018.

As for Ekovest’s outlook on the construction sector, Keng Cheng is of the view that the market will start experiencing a rebound as the worst is over for the property market.

“I am always very optimistic. By virtue of everyone’s confidence, Malaysia can always do better. The market will not be bad forever so I am quite positive about the industry’s outlook going forward,” he said.

“This year might not be a very good year, but there should be a rebound after going through a bad year. Whatever property cooling measures that have been introduced everywhere [in the world], all the negatives have come out,” Keng Cheng added.