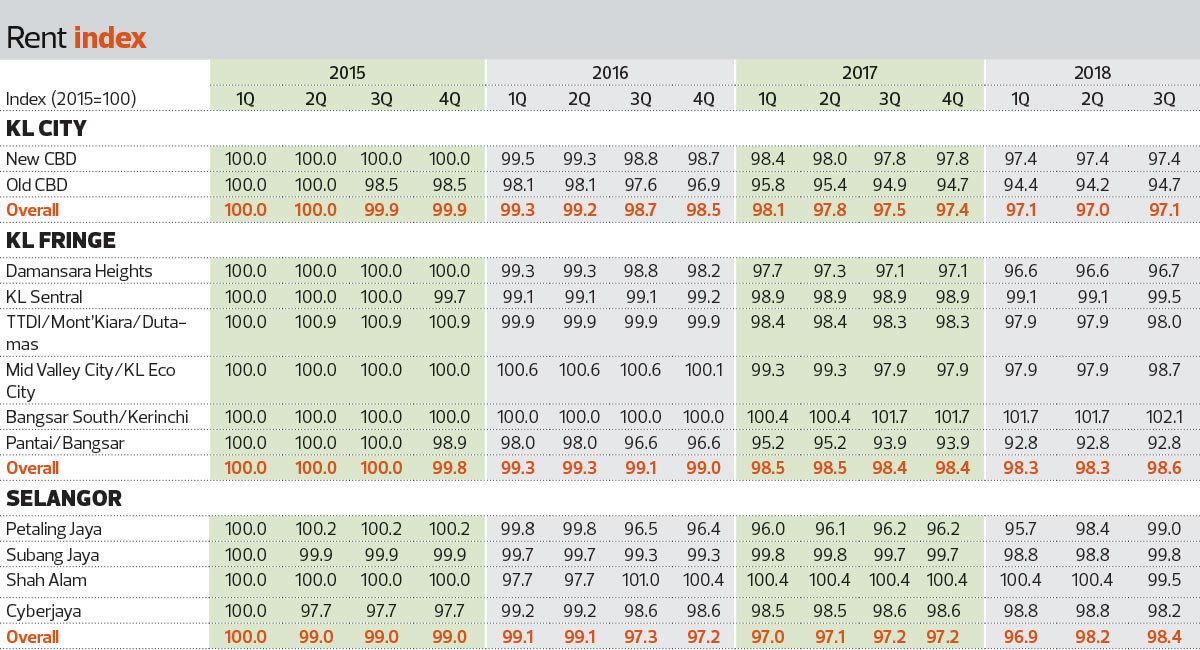 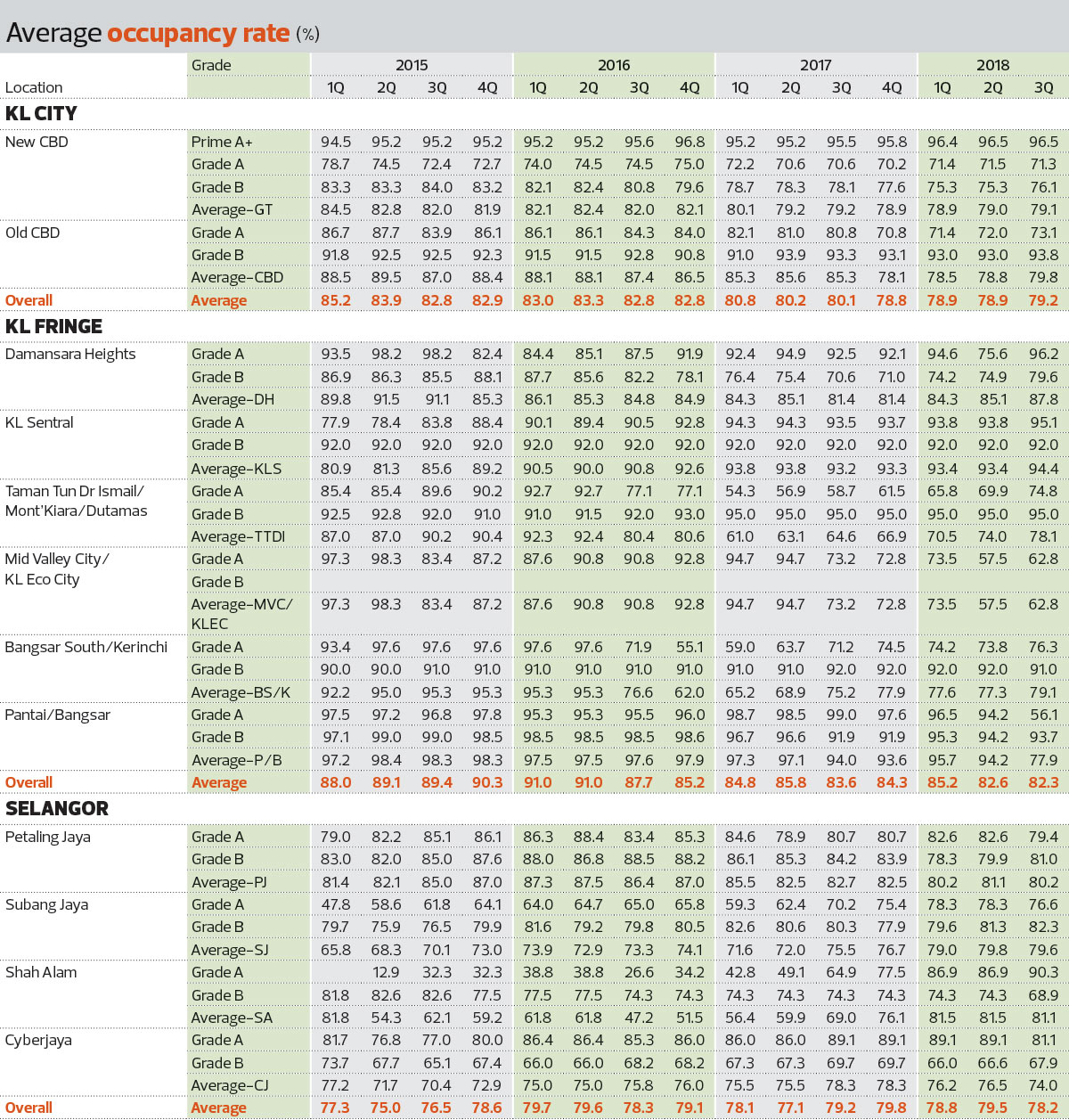 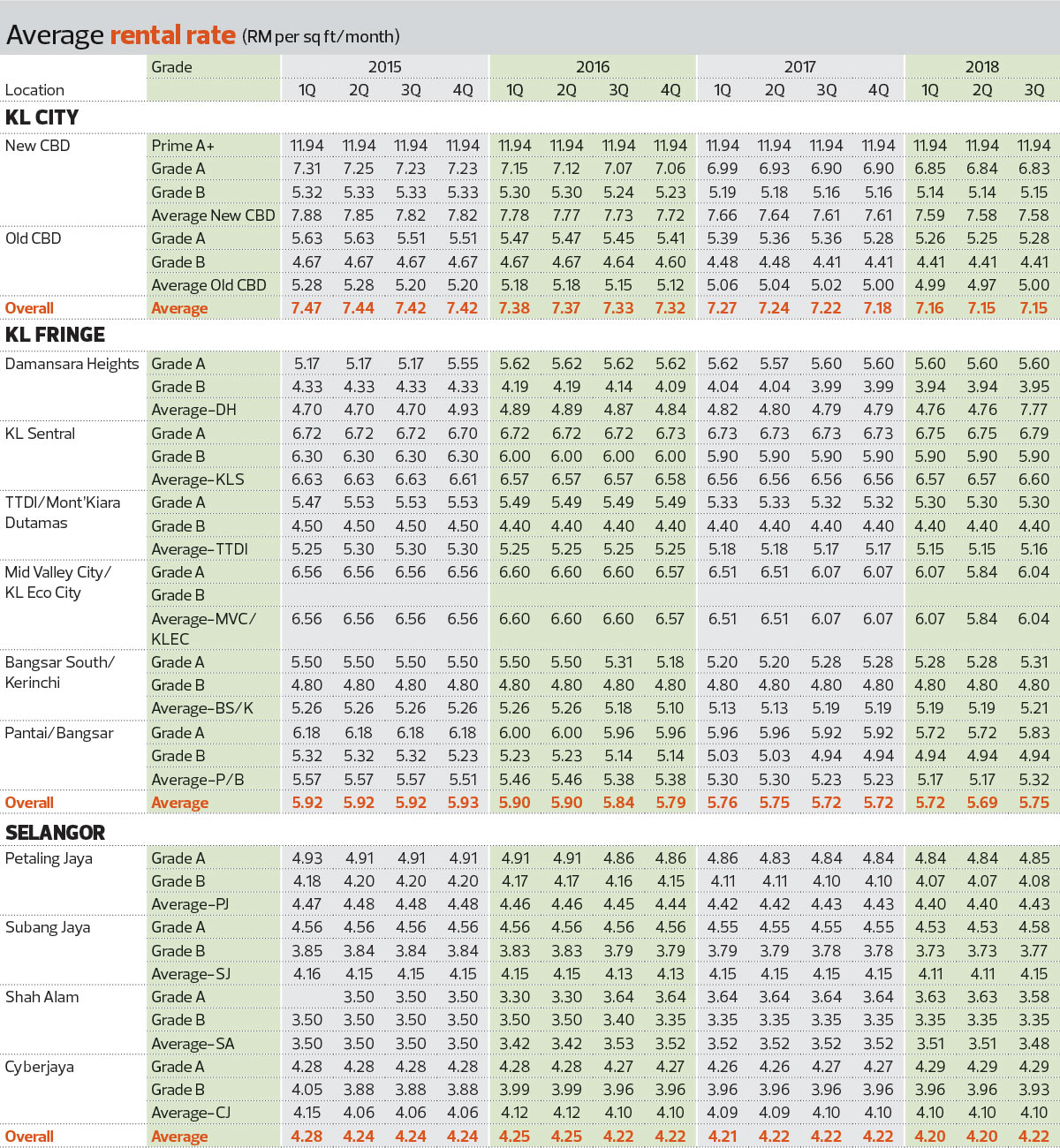 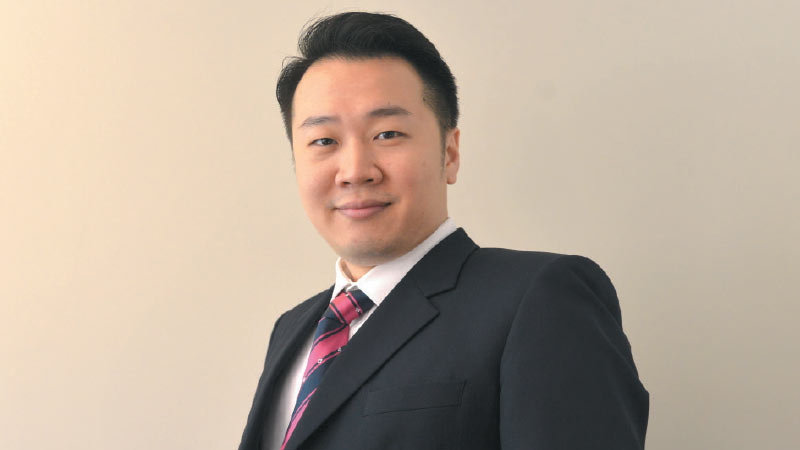 Teh: All in all, occupancy and rental rates will continue to come under pressure. Photo by Knight Frank Malaysia

The Kuala Lumpur and Selangor office market, which is subdivided into three categories — KL City, KL Fringe and Selangor — remained steady in 3Q2018, supported by expansion in the shared services and co-working segments.

“There was no major change or movement in the office market during 3Q2018. Still, the rise of the shared office and co-working segments provided a breather to the oversupplied office market,” says Teh Young Khean, executive director of corporate services at Knight Frank Malaysia Sdn Bhd.

The office market was also in a  subdued mood as corporations adopted a wait-and-see stance after the 14th general election in May while awaiting clarity on the policies of the newly elected government, Teh says in presenting The Edge/Knight Frank Kuala Lumpur and Selangor Office Monitor (3Q2018).

Budget 2019 did not contain any directive that will directly impact the overall office market, he adds.

“Nonetheless, the revival of major infrastructure projects, such as MRT2 (Sungai Buloh–Serdang-Putrajaya Line) and LRT3 (Bandar Utama-Klang Line), is expected to improve overall connectivity within the Klang Valley. Once completed and operational, there may be potential tailwinds for the office market, supported by enhanced accessibility and improved connectivity.”

Landlords of several older office buildings in the city, such as Menara Weld and Menara Standard Chartered, are reportedly planning major refurbishment or upgrading works to cater for changing trends in the occupier market and to “remain competitive in this challenging tenant-led office market”.

The review period witnessed the completion of a few buildings. In KL City, Menara Khuan Choo at Jalan Raja Chulan with net lettable area (NLA) of 85,000 sq ft was completed.  In KL Fringe, Menara Etiqa in Bangsar and Menara Southpoint in Mid Valley City were completed. In Selangor, Nucleus Tower in Mutiara Damansara and Tower 6 of Sky Park in Cyberjaya were completed and offer a total NLA of 416,000 sq ft. Both buildings are still vacant.

The best-performing segment during the review period was KL Fringe, Teh reveals.

Grade A rental and occupancy rates held steady during the review period. “There was notable improvement in the take-up of several office buildings, such as the newly completed Menara Southpoint, Vertical Corporate Tower, Mercu 3 and Mercu 2 @ KL Eco City (KLEC) and Menara KEN TTDI,” says Teh.

Quality to improve in the coming quarter

“Occupancy and rental rates will continue to come under pressure as several office buildings are slated for completion in 4Q2018,” observes Teh. “In the short term, the overall office market is expected to remain flat, supported by expansion in the co-working and shared services segments. Business Process Outsourcing (BPO) segments are also expected to grow. ”

He asserts that the quality of offices in KL will improve in the coming quarter as more Grade A buildings are completed. He also suggests that dated and ageing offices in less strategic locations be converted for new functions such as hotels, hostels and colleges.

“There will also be a shift in office trends whereby offices form part of larger mixed-use or integrated projects. We find that the modern workforce seeks the conveniences of onsite facilities and amenities, for example F&B, lifestyle, retail and services options, and so on.”

During the review period, the occupancy rates of offices in most areas in KL remained stagnant.

Pantai/Bangsar saw a decrease of 17.3% to 77.9%. “The completion of Menara Etiqa (NLA: about 380,000 sq ft), which has yet to achieve significant occupancy level, led to the overall decline in occupancy,” says Teh.

PNB Merdeka Ventures Sdn Bhd, the developer of Merdeka PNB118, expects the 118-storey skyscraper to become an alternative to Kuala Lumpur City Centre (KLCC). With an average office floor space of 20,000 sq ft, it will appeal to large corporations while smaller occupiers will be able to sub-divide the space into quadrants. Permodalan Nasional Bhd will take up 83 floors of space in the building.

The RM500 million 27-storey office tower of Menara Prudential at Tun Razak Exchange (TRX) is currently 93% complete and is due to be completed next year.

IJM Corp Bhd has secured a RM505 million contract from Affin Bank Bhd for the construction and completion of the superstructure works of a 47-storey office tower on a 1.25-acre site at TRX.

A 700-metre building tentatively named Tower M will be built as part of a 4-acre land within Kuala Lumpur City Centre (KLCC) development after2030.

Also, the 23-storey Wisma MCA in Jalan Ampang will be demolished to make way for a 70-storey skyscraper with an estimated gross development value (GDV) of RM1 billion.

The building will comprise eight storeys of basement parking, 27 floors of offices, a 328-room hotel on 24 floors and a two-storey sky lounge and restaurant on the 68th and 69th floors.

The first involves the development of 3.76 acres at the corner of Jalan Bangsar and Jalan Pantai Baru facing the New Pantai Expressway. The second project is within TNB’s headquarters and faces Jalan Bangsar and KL Eco City. The third project is the development of a complex on a 14-acre parcel, comprising buildings of no more than 10 floors, opposite Zehn Bukit Pantai in Jalan Bukit Pantai. The estimated cost is about RM1 billion.

See Hoy Chan Holdings Group has launched its RM1 billion 1 Powerhouse project, which will offer 450,000 sq ft of office space in a 31-storey tower, the 640-room, four-star Avante Hotel in another block and 500 parking bays to cater for the expected increase in parking needs for the 1 Utama Shopping Centre MRT station’s park and ride.

MyEG Services Bhd has entered into a sales and purchase agreement with Cosmopolitan Avenue Sdn Bhd for the acquisition of commercial space measuring 45,328 sq ft within the podium level below MYEG Tower at Empire City Damansara for an aggregate cash consideration of RM35 million.