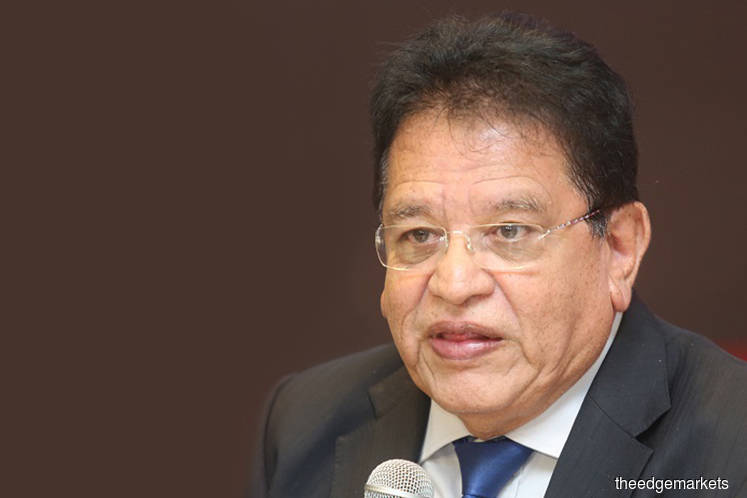 The amount was eventually recorded as a debt-offset for money which Tengku Adnan had borrowed from THSB, said the firm’s assistant manager for accounting and finance, Rabiatul Adawiyah Sobri.

Rabiatul, who was attached to THSB since Oct 22, 2013, testified that she did not receive any instruction from the firm’s chief operating officer (COO), Datuk Mohd Hasbi Jaafar, to transfer the money out or make any payment from THSB’s account to Umno.

Since working there, she confirmed that there has never been a transaction made to Umno’s account.

Rabiatul was testifying in the graft trial of Tengku Adnan who is accused of receiving a RM2 million cheque from property developer Aset Kayamas Sdn Bhd which was deposited into THSB’s account. He allegedlly committed the offence in June 2016, knowing that Aset Kayamas had connection with his official duties as the federal territories minister.

Mohd Hasbi, 55, earlier yesterday testified that he was told by Tengku Adnan that the RM2 million was a political donation for use in the by-election.

Cross-examined by Tengku Adnan’s lawyer Datuk Tan Hock Chuan, the COO said he was aware that two by-elections were conducted in June 2016 — one in Sungai Besar, Selangor and another in Kuala Kangsar, Perak.

He believes he had received a photo of the bank cheque deposit slip via WhatsApp from Tengku Adnan on June 14, 2016, and the Putrajaya lawmaker had told him in a later phone conversation that the RM2 million was a political donation.

Mohd Hasbi added, however, that the transaction was not recorded as such in the company’s account.

“What I can say is that after we communicated, we understood that the money was a political donation, but in the (accounting) treatment, we can only consider it as an amount that was advanced to the company,” Mohd Hasbi said during re-examination by DPP Rullizah Abdul Majid.

Former Kuala Lumpur mayor Tan Sri Mohd Amin Nordin Abdul Aziz later testified that the mayor may be empowered by law to decide on Kuala Lumpur City Hall (DBKL) land sale matters, but would not dare to go against the federal territories minister’s “suggestion” on such matters.

He said he had forwarded to Tengku Adnan two letters by Aset Kayamas in relation to the sale of two lots of DBKL land.

In the first letter dated Aug 26, 2015, Aset Kayamas appealed for a discount on the price of the land, and also for a postponement on the payment of the 10% downpayment for the two lots.

A handwritten note from Tengku Adnan that read “Mayor, please postpone 10% payment for three months” was seen in the letter forwarded to Mohd Amin.

DBKL then approved the request based on the minister’s “suggestion”.

Another letter was sent by Aset Kayamas to Tengku Adnan on Feb 3, 2016, asking for another payment postponement and a reduction in an increase to the sale price from 20% to 10%.

Tengku Adnan had sent a handwritten note that read:” YBhg Datuk Seri Mayor, Agree with land value plus 10% and deferment of the payment to April 1, 2016”.

Cross-examined by Tan, Mohd Amin disagreed that the power to approve lies with DBKL under the law.

Tan: Based on Section 101 of the Local Government Act 1976, the power to sell DBKL’s land was given to the local authority, but not the minister.

Tan: The law provides the local authority power to sell the land to developer, but does it require the minister’s consent?

Mohd Amin: I’m not sure.

Tan: When the minister gives good, reasonable suggestions that would benefit the people of Kuala Lumpur, and also DBKL staff, DBKL will agree (with that suggestion)?

Tan: At the end of the day, the ultimate power lies in the hands of DBKL? The minister can give suggestions, but if DBKL does not agree …

Mohd Amin: Maybe the power lies with the mayor but the mayor would not dare to make the decision.

His reply drew laughter from the public gallery, with Tan remarking that it was a “fair statement”.

Mohd Amin, however, agreed with Tan that the decision to sell two lots of DBKL’s land to Aset Kayamas was made by DBKL with the consent of the minister.

Earlier, Mohd Amin agreed with Tan that Tengku Adnan had consented to Aset Kayamas’ request as the developer was giving DBKL a very good deal.

In addition to that, the developer had also offered to sell 120 units of affordable homes to DBKL staff, and also to build a hostel for the DBKL training institute on the 0.5ha land it bought.

Mohd Amin said it would be “rare” for DBKL to disagree with the minister’s proposals, noting that it would usually provide alternatives to the minister if it disagreed.

Mohd Amin, however, agreed that in this case, DBKL agreed with what was decided by Tengku Adnan.