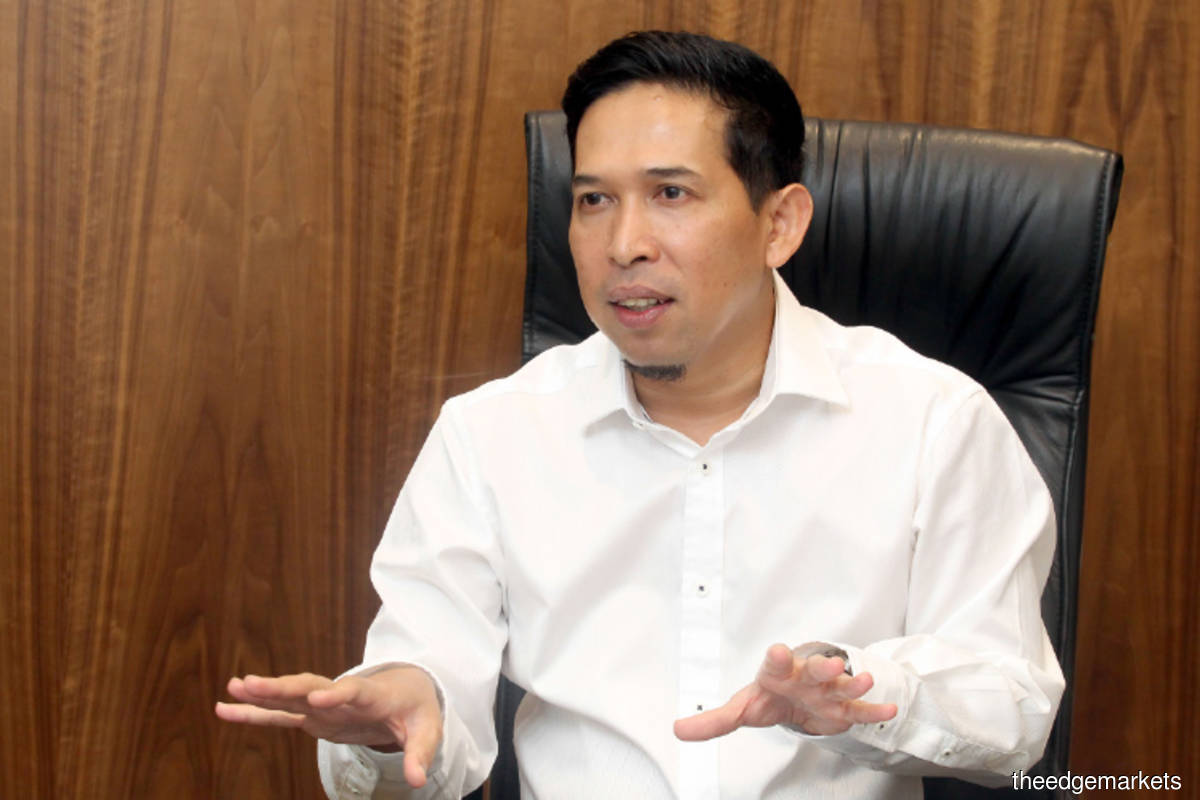 Mustakim: We have RM1.2 billion worth of contracts and we are growing, with a target of another RM2 billion next year. (Photo by Kenny Yap/The Edge)

SINCE the emergence of Datuk Dr Abdul Karim Abdullah and Grand Deal Vision Sdn Bhd as major shareholders of KPower Bhd (formerly Kumpulan Powernet Bhd) in June last year, the group’s share price has been on an upward trend.

The rapid increase in KPower’s value can be attributed to the fact that, under a new team led by managing director Mustakim Mat Nun, the group has turned a profit, and in a big way.

Now, former banker Mustakim wants to take KPower’s value to RM5 billion within five years. Getting there is not impossible, he says, as the group can secure another RM2 billion worth of renewable energy power plant construction contracts next year.

“When we took over the company, it had only about RM70 million in market capitalisation. After one year, we are valued around RM350 million. Today, we have RM1.2 billion worth of contracts and we are growing, with a target of another RM2 billion next year.

“So, we can get RM3 billion worth of contracts in just two years. To achieve RM5 billion market capitalisation, I think it is not that difficult,” says Mustakim in an exclusive interview with The Edge.

KPower managed to secure RM802.5 million worth of engineering, procurement, construction and commission (EPCC) contracts in the renewable energy space in the first six months of this year.

As the contracts flowed in, KPower managed to turn its fortune. In the nine months ended March 31, 2020, the group recorded net profit of RM5.48 million, compared with a net loss of RM1.83 million in the previous corresponding period.

During the period, KPower’s revenue expanded to RM56.5 million from just RM1.27 million, correspondingly with net profit margin at 9.7%.

Mustakim says gross margin for an EPCC contract typically ranges between 15% and 18%. In addition, most of the group’s EPCC contracts also involved designing, which provides it with higher gross margins of around 20%.

From textile manufacturer to RE contractor

Prior to the change in major shareholders and top management, KPower was a textile manufacturer with a plant in Bentong, Pahang. The group also dabbled in property development and investment, with a project in Sentul and an asset in Liverpool, the UK.

The group had been making losses for years, though.

Meanwhile, prior to acquiring a 10.18% stake in KPower, Mustakim was already involved in the renewable energy (RE) industry for almost a decade through a private company called OHP Group.

In 2011, OHP secured its first mini hydropower plant project, located in Kota Marudu, Sabah. It then continued to expand into Laos, Nepal and Indonesia. Over the years, OHP has secured more than RM1 billion worth of renewable energy plant projects.

The company’s shareholders and top management felt, however, that to take their business to a higher level, they needed to have a public-listed vehicle.

“[The plan to get listed] was so that it would be easier for us to secure financing and establish our track record. We scouted around to acquire a suitable public-listed company, and then we managed to acquire KPower from the existing shareholders.

“Powernet then was involved in property development, but it didn’t have a lot of projects. It only had one project in Sentul at that point in time. So, the structure is quite loose, which allows us to inject a new business and just run it on that platform,” says Mustakim.

So, in June last year, KPower was acquired from the then major shareholders. Mustakim, through Grand Deal Vision Sdn Bhd, acquired a stake of about 10% in the group, while Karim of Serba Dinamik Holdings Bhd became his backer, taking a 20% stake.

Karim’s involvement is so that KPower would be able to leverage the business networking and expertise of Serba Dinamik to secure more EPCC contracts in the RE sector around the world, says Mustakim.

“Serba Dinamik is expanding very aggressively not only in Malaysia but throughout the world. So, by partnering with him (Karim), we have the opportunity to leverage Serba Dinamik’s business network.

“We will ride with them to seek opportunities in other continents. So, for us to achieve RM5 billion market capitalisation in five years is, I would say, very achievable.”

Nevertheless, KPower is bidding in the fourth round of the Large Scale Solar power plant (LSS4) tender, which was recently opened by the Sustainable Energy Development Authority (SEDA). The group is bidding for a 30mwac-capacity LSS as a concession holder.

The group is also partnering with other bidders to become their preferred EPCC contractor if they win any portion of the LSS4, says Mustakim. KPower is in partnerships with companies that are bidding for 300mwac LSS4, he says.

While KPower has become a full-fledged RE EPCC contractor, it is not abandoning its roots as a textile manufacturer. Instead, the new management is transforming the group’s manufacturing business through the application of technology.

Since the new shareholders and management took over KPower, investors have been asking about their plan for the textile manufacturing business. Some say the business should be disposed of, as it is not synergistic with the RE business.

“We see it differently, because there is a way of turning around the manufacturing business through the application of the right technology, joint ventures with the right partners and getting into markets outside of Malaysia.

“For the last one year, what we did was to consolidate the manufacturing business, looking into different technologies to improve the capabilities of our existing plants,” says Mustakim.

He adds that the group is looking at producing medical-grade fabric as part of the transformation of the manufacturing business. KPower is one of the companies called upon by the Ministry of Health to explore the possibilities of producing medical equipment to ensure sustainability of supply in a pandemic.

KPower is still in discussions with potential technology partners to produce medical-grade fabric and other medical devices and equipment, says Mustakim. The group is also looking at mergers and acquisitions to realise this initiative.

“We are building up the business by looking at leveraging whatever we are doing now. Our manufacturing capability can be leveraged in the medical industry. But, of course, it is not something that we can do overnight,” says Mustakim.