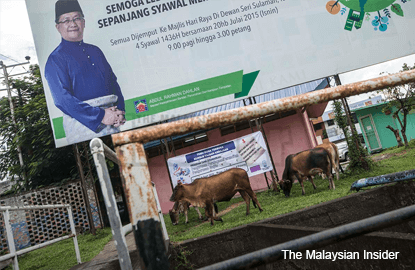 KOTA BELUD: Jalumin Bayogoh, a Kota Belud native, tells a joke about his district when asked how he feels about it now that it is the only parliamentary constituency with two federal ministers.

Housing and Urban Planning Minister Datuk Abdul Rahman Dahlan is the member of parliament for Kota Belud, while Communications and Multimedia Minister Datuk Seri Salleh Said Keruak is assemblyman for Usukan, which is in Kota Belud.

The district on Sabah’s northeast coast has also produced a Dewan Rakyat speaker, two chief ministers and a handful of Borneo’s political elite.

Jalumin’s joke is that despite its rich political lineage, Kota Belud did not join the 21st century until the TD Lodge Kota Belud was built about four years ago.

“If the hotel was not there, the people of Kota Belud would never have felt what it is like to ride in a lift. It’s the only building in the district with one,” said Jalumin, who contested the Kota Belud parliamentary seat in the 13th general election in 2013.

Jalumin told this joke over and over again in his campaign to become MP to show how backward Kota Belud was despite the many famous sons who could have transformed it the way other politicians have done for their home towns.

Jalumin’s joke reflects a traditional Malaysian compact between voters and their lawmakers. Politicians are supposed to develop their towns and better their lives in exchange for votes.

The most famous examples are what former prime minister Tun Dr Mahathir Mohamad did for Langkawi, Kedah, and what current PM Datuk Seri Najib Razak is doing for Pekan, Pahang.

If the same standard is applied to Kota Belud, said Jalumin, its economy would already be big enough to produce tall buildings.

Instead, its residents complain that many of its villages still do not have running water while traffic planning in its town centre is so bad, it takes half an hour to move 100m during some parts of the day.

Yet Kota Belud is the birthplace of Sabah Umno, which first held public office in 1967 and which was part of Sabah’s independence struggle, said resident and former assemblyman Datuk Ismail Gimbad,

“Kota Belud can be proud of itself for producing so many Sabah ministers,” said Ismail, who was assemblyman for Surob in 1967. — The Malaysian Insider