IT is all about the fans — firstly, as a means of thanking them for their support and secondly, to reward them for their loyalty to the club. Such is the gratitude of the Liverpool Football Club (LFC) that it decided to open its first official retail store outside the United Kingdom (UK) in Kuala Lumpur.

The club’s seventh official retail outlet opened on Sept 26 on the third floor of Lot 10 Shopping Centre. LFC legend and former striker Robbie Fowler was present to officially open the store and for a meet-and-greet with Anfield’s Malaysian fans.

When quizzed on his thoughts of Malaysia hosting the first ever LFC store outside of the UK, Fowler pointed out that “everyone connected with Liverpool knows about the massive fan base that exists here in Asia and especially in Malaysia.”

“We have always appreciated that passionate support in this part of the world. By opening a store here we are making it easier for fans to access LFC merchandise without having to pay for the delivery and import charges,” Fowler added.

LFC merchandising director Mike Cox said the store was to give LFC Malaysian supporters an enhanced “connection to the Anfield family by bringing the club to the fan base.”

In expanding its retail operations during the 2014 to 2015 season, LFC will open more stores in Malaysia while also catering to the markets in Ireland, Indonesia and then Thailand.

LFC’s chief commercial officer Billy Hogan, in taking note of the club’s passionate fans in Malaysia said: “The look and feel of the LFC store here matches the club’s new retail concept [that is] soon to be applied across all LFC stores globally.”

The 1,400 sq ft store offers a full range of merchandise from the replica kit, exclusive collection of mugs, key chains, stickers, and other fashion accessories. In the coming months, fans can look forward to possibly having kits that players have worn on the field and a localised Malaysian online store.

“The merchandise in the store is exclusive to the club and over the coming months, there will be more products coming in like signed players merchandise,” Cox said, adding that goods sold would be tailored to suit the market.

“There may be products that sell well in the UK but do not sell well here. So, it all depends on the sales of the products,” he said, citing that the ‘bestseller’ in the UK was replica kits.

“The merchandise will eventually become more localised as we find out what our [Malaysian] fans like and don’t like. For the time being, this is the marketing strategy,” he said.

Based on experience, Cox said, replicating a marketing strategy just because a brand is successful in one market would not necessarily result in success in a new market.

The best way to see the performance of the brand and its products in a new market, he said, is to interpret the sales of the products in the market, listen to the customers and learn from the spending trends at the store.

“We will replicate to a certain extent how we market our products in the UK, but there will be a localised element as well. We have done that with our social media and our websites in which a 60% average of the content is from the UK and the rest is localised to the country.”

In addition, Cox said, LFC is also in the process of starting a retail page on Facebook and a Twitter account to get closer to the fans and get feedback on products in stores.

Social media has proven to be a good platform when it comes to advertising, Cox said, citing the launch of LFC in Lot 10 as an example.

“It [social media] is of this age, so it gets the news out there very fast,” he said, nodding to the turnout that was more than expected and noting the success of LFC’s first marketing strategy to promote the store.

Because the great number of Anfield supporters could not fit into the space, only the office bearers of the LFC Malaysia and the KL Kopites (official LFC supporters club based in Kuala Lumpur), were personally invited by LFC’s head office in the UK for the launch.

Still, an estimated 200-odd enthusiastic Liverpool fans were waiting in line to get into the store and more importantly to meet “God”, Fowler’s nickname which he earned for his ferociousness in front of the goal. In his two spells at Anfield, Fowler netted 183 goals in 357 appearances. 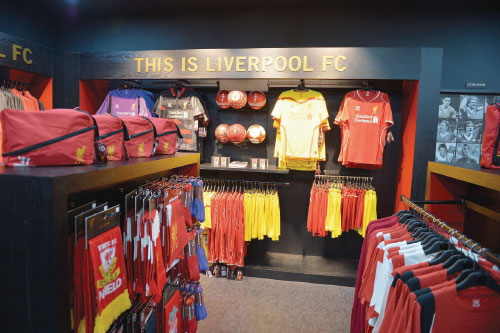 This article first appeared in The Edge Financial Daily, on November 18, 2014.