The group’s 9MFY15 core net profit after stripping out fair value loss on derivate contracts was derived at RM706.3 million, dropping 12.9% y-o-y. The core net profit was within our and consensus’ expectations.

The 3QFY15 core net profit of the group surged 15.7% y-o-y, and 31.5% q-o-q, on higher dividend income from its overseas investment of RM53.4 million, receipt of inter-company interest income upon disposal of subsidiary that amounted to RM12.6 million, and improved performance of the plantation division.

The abovementioned income had offset the weaker performances of its core business divisions. The plantation and manufacturing divisions were weighed down by lower crude palm oil (CPO) prices and lower selling prices of refined products, while its property division reported lower earnings on slower profit recognition from its project in Sungai Buloh.

The plantations division reported a 17% improvement in segment profit on the back of seasonal higher CPO production (+16% q-o-q) that was more than enough to offset the lower CPO prices (-3.9% q-o-q). Profit from the property segment plunged to RM7.8 million from RM28.9 million in the previous quarter as profit from the segment in the previous quarter was boosted by disposal of industrial and commercial land. 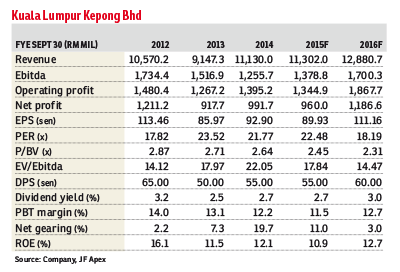