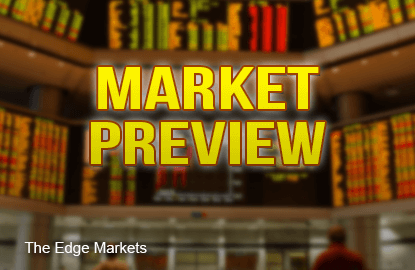 KUALA LUMPUR (July 23): The FBM KLCI is expected to trade range-bound with a negative bias today in line with the overnight decline at most global markets.

Global equity markets fell on Wednesday, pulled down by a weak revenue forecast at Apple Inc, the world's largest company, while a rebounding dollar after its biggest decline in a month weighed on gold and some stocks, according to Reuters.

Apple shares slid 4.3 percent after the company's fourth-quarter revenue forecast fell short of estimates and it missed some targets for iPhone sales, it said.

AllianceDBS Research in its evening edition Wednesday said the FBM KLCI had on July 22 traded within previous day’s range to form an inside day bar as market participants decided not to stage an immediate follow through buying support.

The research house said that in the absence of stronger buying power, the benchmark index was in the red throughout the trading sessions before settling at 1,729.53 (- 6.66, - 0.38%).

“In the broader market, losers outnumbered gainers with 409 stocks ending lower and 403 stocks finishing higher. That gave a market breadth of 0.98 indicating that the bears were in control with the bulls closely matched,” it said.

AllianceDBS Research said the inside day bar indicated a pause in the game play.

“The lower high and higher low on July 22 was not a surprise, because the strong up close on July 21 was artificially inflated in the last few minutes buying of selective blue chips.

“There was no good quality of buying demand in the market on July 21.

“Given what happened in the last 3 days [first a near day’s low down close in one day (July 20) followed by a day’s high settlement in the subsequent day (July 21), then an inside day setup (July 22)], the market is seen looking for a positive catalyst to take the benchmark index to a higher ground, this can be seen from the attempts by certain market participants to keep the benchmark index above the 1,720 level,” it said.

The research house said therefore, a crossover of 1,739 should see the market gearing towards the next resistance at 1,760.

It said a fall below 1,720 could push the benchmark index down to the subsequent support at 1,706.

“The analysis of overall market action on July 22 revealed that buying power was weaker than selling pressure.