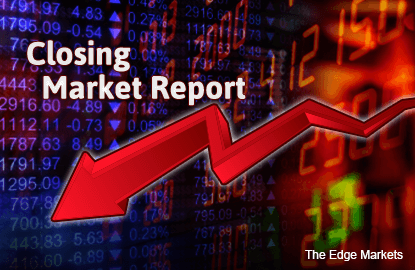 KUALA LUMPUR (March 25): The FBM KLCI fell 11.74 points or 0.7% as US interest rate hike anticipation continued to hit sentiment. US rate hikes do not bode well for Asian markets on expectation that funds will flow back to US dollar-based assets.

At 5pm, the KLCI closed at 1,703.79 points as IOI Corp Bhd and SapuraKencana Petroleum Bhd shares declined. The KLCI cut losses from its lowest intra-day point at 1,699.76.

IOI Corp shares fell 18 sen to close at RM4.65 with some 26 million units traded. IOI Corp has been closely watched as the Roundtable on Sustainable Palm Oil (RSPO) is reviewing the company's certification.

According to a Bloomberg report, the RSPO alleged that IOI Corp had not complied with RSPO's rules.

SapuraKencana shares fell nine sen to close at RM1.91 after the company reported a RM1.29 billion net loss in the fourth quarter ended Jan 31, 2016 compared to a net profit of RM129.13 million a year earlier.

Bloomberg reported that the prospect of higher US interest rates is returning to the spotlight, as regional Federal Reserve presidents indicated support for higher rates as soon as economic data warrant.

Across Bursa Malaysia, decliners outnumbered gainers at 465 to 295. A total of 1.43 billion shares worth RM1.15 billion changed hands.

Panasonic Manufacturing Malaysia Bhd was the top gainer while KNM Group Bhd was among the most-actively traded stocks.

Hong Kong and Australia markets will also be closed this Monday (March 28) for the Easter holiday.