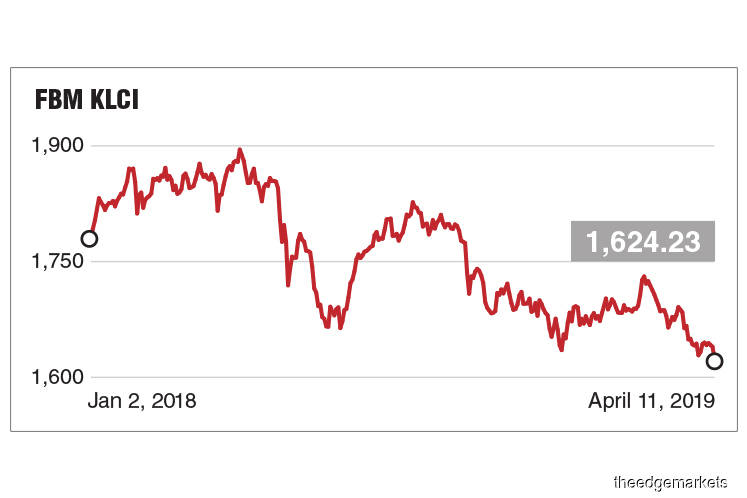 Year to date, it is the only major Asian index in the red year after falling 3.92%, according to Bloomberg data.

Of the 30 companies on the index, 25 stocks were in negative territory yesterday, with TNB leading the decliners after news broke that its major shareholder Khazanah Nasional Bhd offered to sell shares it held in the company at a discounted price under a placement deal to raise RM1.05 billion.

TNB closed 52 sen or 4.13% lower at RM12.06, after easing from an intraday low of RM11.80. It was the largest decliner on the local bourse yesterday by percentage.

To Areca Capital Sdn Bhd chief executive officer Danny Wong, the continued slide is expected as the government is still working on its kitchen-sinking exercise to put the economy back on a stronger footing.

Describing the current weakness in the local bourse as a “short-term pain”, he expects things to turn around once the government paints a clearer direction for growth, coupled with continued optimism in improving US-China relations towards a trade deal, and the introduction of China’s stimulus package. “As such, I expect Bursa Malaysia to perform better in the second half,” he added.

He similarly expects a recovery in the second half, with an optimistic projection of around 1,800 points for the KLCI by year end, on expectations of better corporate earnings numbers, and assuming global growth expectations remain intact, with no new “problems” on the geopolitical front.

The present selldown, meanwhile, presents buying opportunities for long-term investors, said Mohd Redza, and advised investors to watch out for those with strong fundamentals and good dividend-paying capacity.

As an example, he said the slew of contract awards for infrastructure projects in Sarawak makes counters like KKB Engineering Bhd and Cahya Mata Sarawak Bhd attractive, should current market sentiment pull their prices down.

Regardless, Mohd Redza cautioned investors to be selective amid heightened political risks, the never-ending Brexit saga, and with general elections coming up in countries like India and Indonesia. “Furthermore, US President Donald Trump is seeking re-election next year, [so] there are further risks to global growth should he keep to his protective stance on global trade,” he added.