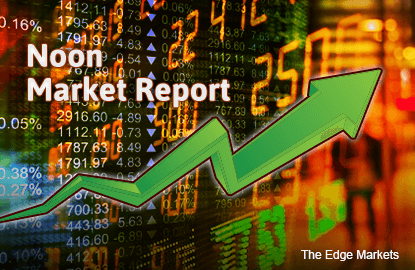 KUALA LUMPUR (Feb 15): The FBM KLCI rose 0.76% at the midday break today, lifted by select blue chips in line with the gains at most regional markets.

Asian shares bounced to snap a five-session losing streak on Monday as a strong fix for China's yuan eased devaluation concerns and Shanghai stocks returned from the Lunar New Year holidays with only modest losses, according to Reuters.

The Shanghai Composite Index eased 2.2% in its first session since Feb 5, a relatively benign move given the wild swings seen worldwide recently, it said.

BIMB Securities Research said markets in Asia dropped sharply on Friday, with the Nikkei tumbling, after an overnight sell-off on Wall Street as oil remained volatile and concerns about how central banks' easing measures will affect banks' earnings.