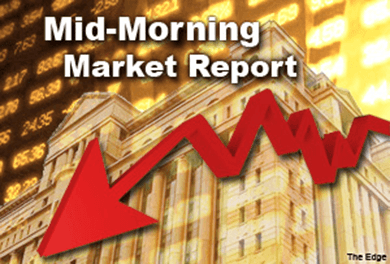 KUALA LUMPUR (June 18): The FBM KLCI remained in negative territory at mid-mornin today as a lack of fresh catalysts kept investors sideline despite the uptick at most regional markets.

Asian equities rose early on Thursday after the Federal Reserve sounded more dovish than many had expected and led investors to push back their expected timing of a rate hike, while the dollar was put on the defensive on the same token, according to Reuters.

Hong Leong IB Research said that without fresh catalyst, the FBM KLCI would continue to trade sideways  albeit with an upside bias in anticipation of a mid-year window dressing activities from a grossly oversold market.