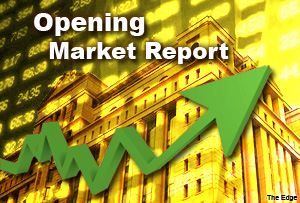 KUALA LUMPUR (Oct 17): The FBM KLCI, which opened in the red, erased losses for a 0.95-point or 0.05% gain. The KLCI had tracked Asian equities' rise as investors speculated that the US might delay the conclusion of its quantitative easing (QE) programme.

The QE has led to capital flows into emerging Asian markets like Malaysia.

At 9.02am, the KLCI was traded at 1,768.72 on gains in stocks like UMW Holdings Bhd and SapuraKencana Petroleum Bhd.

The KLCI had rebounded following a 19.07-point or 1.07% drop yesterday. Today, analysts said despite the KLCI's rise, more clarity on world policies was needed to offset market volatility.

"The market should stay volatile in near-term pending more clarity on further measures by global leaders which are needed to sustain a global recovery and address jittery investor's sentiment," TA Securities Holdings Bhd wrote in a note today.

Bursa Malaysia saw some 90 million shares worth RM25 million changed hands. There were  161 gainers versus 73 decliners.

The top gainer was Nestle (M) Bhd while the leading decliner was Lafarge Malaysia Bhd.

The most-active stock was Hubline Bhd.

Earlier, Bloomberg reported that Asian stocks rose from a six-month low after a Federal Reserve official said the central bank should consider delaying the end of bond purchases and US data eased concern over the global economy.

The MSCI Asia Pacific Index climbed 0.1 percent to 134.93 as of 9:01 a.m. in Tokyo after closing yesterday at the lowest since March 25. The gauge is heading for a sixth straight weekly decline as faltering recoveries in China and Europe spark concern global economic growth will slow and the Fed considers when to raise interest rates.