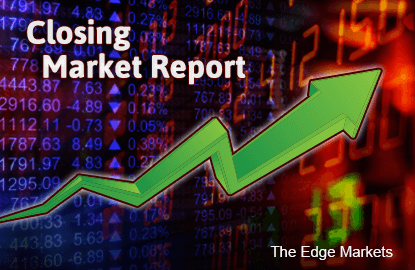 KUALA LUMPUR (July 31): The FBM KLCI rebounded 23.22 points or 1.4% to close at 1,723.14 points today, supported by local institutions, following a lacklustre performance over the past week.

Maybank Investment Bank Bhd regional chartist Lee Cheng Hooi told theedgemarkets.com that he saw no concrete factors behind today’s rise, but said the index may be supported by local institutions.

“I do not see any firm reason behind the rise. Perhaps the local funds came in to support ahead of the weekend,” he said, adding that most of the index-linked counters were up today.

Looking ahead, Lee said the KLCI should still be range-bound and risks still prevail as the ringgit is creeping towards RM3.84 against the US dollar.

“Fortunes of the index are very much subject to foreign market fluctuation in the next fortnight,” he said.

Bloomberg data showed that the ringgit has weakened to RM3.8300 against the US dollar at the time of writing, and to RM2.7840 against the Singapore dollar.

The top gainer was British American Tobacco (Malaysia) Bhd, while the decliners were led by Nestle (Malaysia) Bhd. The top active stock was Vsolar Group Bhd.

Reuters reported that Asian shares inched higher on Friday but were still set to post a loss for July, led by China's biggest monthly drop in six years.
MSCI's broadest index of Asia-Pacific shares outside Japan was up about 0.3% at 0532 GMT, but recorded a loss of 5.9% for the month.