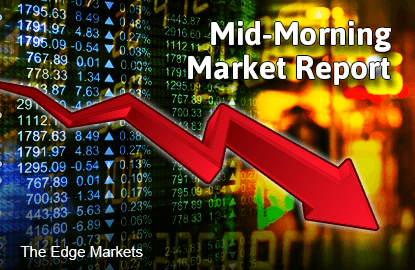 KUALA LUMPUR (Aug 3): The FBM KLCI pared some of its loss at mid-morning, with profit taking likely to keep the benchmark index in the red.

Asian shares took cues from a lower Wall Street and dipped early on Monday, while the dollar was on the defensive against the euro and yen following disappointing US wage growth data that dented prospects for an early interest rate hike by the Federal Reserve, according to Reuters.

Hong Leong IB Research said the FBM KLCI was likely to extend last Friday’s rally in the early part of this week.

However, it said upside was likely to be capped near 1,746 (61.8% FR) and 1769 (50% FR) levels due to lack of fresh catalysts, lingering worries on potential sharp slowdown in China economy and wild swings in SHCOMP, domestic political glitches, 1MDB probes, sliding Ringgit and commodities prices and expectations of another weak CY2Q15 results season.